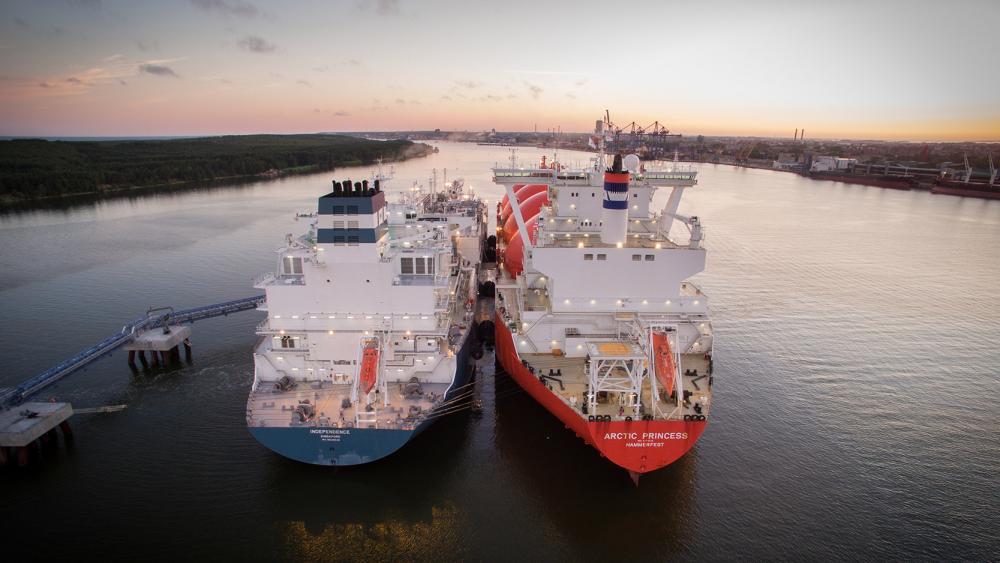 Höegh LNG’s Independence, left, a floating storage and regasification unit (FSRU) operating in Klaipeda, Lithuania, connects to the company’s Arctic Princess LNG carrier. As European countries cut off imports of pipelined Russian gas in response to that country’s invasion of Ukraine, shipments of LNG have increased and FSRUs have been relied on to compensate for a shortage of LNG import facilities on the continent. (Source: Höegh LNG)

Russia’s invasion of Ukraine and the subsequent tightness in the global natural gas market have opened a window of opportunity for LNG export terminal developers looking to make a final investment decision (FID), according to investment banking advisory firm Evercore ISI.

For energy exporters, the environment for obtaining construction approvals and bank financing to build a new export facility is much more positive than it was just 12 months ago, said Evercore’s Sean Morgan during a recent webinar.

Morgan said he looks to Cheniere Energy Inc., pioneer of Gulf Coast LNG liquefaction and export terminals, as the bellwether for the U.S. response to Europe’s pivot away from Russian-supplied gas.

“Most people have the next phase of production at Corpus Christi stage III already built into their models, so they’re basically going to be looking at either reduction in terms of the discount rate as the company grows and cash flow improves, or multiple expansion unless they do more expansion,” Morgan said.

It’s not entirely clear yet which path Cheniere will take. Assuming a generational shift in market share with Russia losing 155 Bcm a year, he said, will the company be emboldened to buy a FERC-approved competitor or invest in a private project as a means to expand capacity?

Cheniere CEO Jack Fusco said the company expects sustained growth in the global LNG market on May 4 when the company announced first-quarter earnings. The company took a loss in the quarter, though it beat Wall Street estimates. Cheniere raised its earnings estimate to $8.2-8.7 billion from $7-7.5 billion.

Complicating the European energy equation have been policies to turn away from fossil fuels to meet climate change decarbonization goals. Cutting off imports of Russian energy accelerated the effort to meet those goals but without a corresponding increase in replacement clean energy sources, such as renewables.

The short-term solution to Europe’s energy crunch has been to return to fossil fuels and redirect LNG tankers headed elsewhere. In January and February, Morgan said, about 70% of LNG volumes shipped from Cheniere’s terminals found their way to Europe via resale, a benefit of the U.S. market’s destination flexibility. There are limits, of course, to what U.S. exporters can provide to Europe because of contracts with customers in Asia and export plant capacity.

There are also limits to European import plant capacity. Germany relies on gas for 24% of its energy needs and on pipelines for all imports. Two LNG import terminals, in the coastal towns of Stade and Wilhelmshaven, are about 24 months from being online, but their combined capacity will be less than 2 Bcf/d, far below the country’s 8.6 Bcf/d consumption in 2019, according to the U.S. Energy Information Administration (EIA).

On May 5, the German government announced that Wilhelmshaven would be designated an LNG hub and be able to receive seaborne LNG as early as the winter of 2022-2023. Two floating storage and regasification units (FSRUs) were chartered for 10 years for that purpose and the country’s economy ministry has said it sought to secure four vessels. The price for those four floating LNG terminals is about 2.5 billion euros (US$2.64 billion).

The EU’s total LNG import capacity is significant. In 2021, regasification facilities produced 157 Bcm, or about 40% of the EU’s consumption, the European Commission said. However, many of the terminals are on the Iberian Peninsula and only two small gas pipelines connect from Spain to France.

An extension of the Midi-Catalonia (MidCat) pipeline, which would pump about 7.5 Bcm per year of imported Algerian gas across Spain’s border with France, was canceled in 2019 as part of a European move away from fossil fuels. There is support to revive the project, but if successful, completion would be about five to six years off.

On May 3, Greece and Bulgaria announced they would deploy an FSRU 11 miles offshore the northern Greek port of Alexandroupolis. The vessel’s capacity will be about 5.5 Bcm per year. It is scheduled to begin operations in late 2023. When combined with an existing FSRU offshore Athens, Greece will be able to triple its regasification capacity.

FSRUs can be completed in a fraction of the time it takes to build an import terminal and at much lower cost. The global fleet almost doubled, to 43 from 24, between 2016 and 2020.

When Russia invaded Ukraine on Feb. 24, Morgan expected to see a big jump in the number of contracts signed with European gas companies. That was not the case. China, however, moved aggressively at the time to secure long-term LNG supplies ahead of European utilities that had not yet pivoted from Russian gas.

The situation has changed, though. With the conflict entering a stalemate period in what former U.S. Defense Secretary Leon Panetta calls a “critical stage of this war,” European countries are moving quickly to keep energy cash flows from funding Putin’s war machine. That, Morgan said, will benefit U.S. LNG operators as more European customers enter into sales and purchase agreements (SPAs).

The LNG sector is in flux as it responds to the war. Not only has output plateaued to a large extent, but expected future volumes may not materialize. That has changed the outlook sharply in the last 12 months for developers seeking investment backing to get to FID. For operators of existing projects, wide arbitrages will be the rule for the next three years.

“It takes a long time to build these projects,” Morgan said. “You look at the volumes that are coming through 2024 and it is absolutely miniscule.”

The next major project on the schedule is Novatek’s $12 billion Baltic LNG project in Ust-Luga on the Gulf of Finland. Morgan expects the 13 million tonnes per annum (mtpa) project to be delayed without western financing or know-how.

Chinese banks might be able to step in to finance Baltic LNG but it’s unlikely that China could build it. There are no Chinese equivalents of Schlumberger or Baker Hughes or Halliburton that are able to take over a project. Another major project, TotalEnergies’ $20 billion Mozambique LNG with capacity of 12.8 mtpa, has been held up following a 2021 attack by insurgents tied to the Islamic State.

In North America, however, Shell’s 14 mtpa LNG Canada project is scheduled to begin deliveries by mid-decade, and the $10 billion Qatar/Exxon Mobil Golden Pass project on the Gulf of Mexico is on track to go online in 2024 with capacity of 15.6 mtpa.