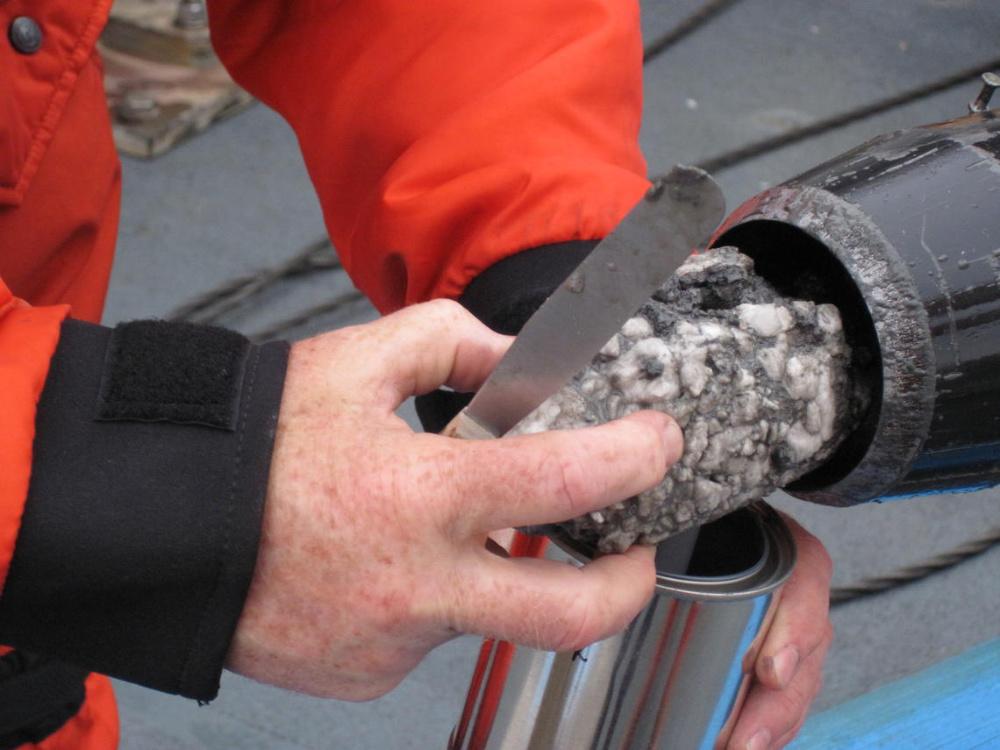 In 2010, the U.S. Geological Survey recovered white chunks of gas hydrate (methane ice) mixed with gray sediment a few feet below the seafloor in the Arctic Ocean at a water depth of about 8,000 feet. (Source: Helen Gibbons/USGS Pacific Coastal and Marine Science Center)

“To date, there is no known commercial production of natural gas from gas hydrate formation and the commercial viability of gas hydrate reservoirs is not yet known,” USGS said in a statement Sept. 10. “This assumption is based on both limited field testing and numerical production models of gas hydrate-bearing reservoirs. No analysis was provided as to whether it would be profitable to produce these resources.”

Gas hydrates are crystalline solids that contain gas molecules trapped inside cage-like structures of water molecules. They are naturally occurring, forming in the presence of high pressures and low temperatures. Although gas hydrates can be problematic for oil producers, as they tend to cling to each other and increase in size causing blockages in pipes, they are also seen as another form of unconventional resource that could be developed if challenges are overcome.

“The study of gas hydrate as an energy resource is still an emerging field,” USGS scientist Tim Collett, lead author of the assessment, said in the statement. “The USGS has been conducting research on gas hydrates since the 1980s. Every time we conduct these assessments, we incorporate more and higher quality data, and our estimates become more precise.”

Gas hydrates below the permafrost were assessed, while free gas potentially trapped below the gas hydrate stability zone were not part of the study.

“Geochemical analyses of drill cuttings and core samples from wells drilled in the state of Alaska lands between the Canning and Colville rivers and within NPR-A indicate that the gas within the drilled and well log inferred gas hydrate accumulations is in part from thermogenic sources, with the thermogenic gas migrating from deeper sources, including known conventional oil and gas accumulations,” USGS said in the report.

“Thermal conditions conducive to the formation of permafrost and gas hydrates are believed to have persisted in the Arctic since the end of the Pliocene (about 2.58 million years ago),” the agency added. “In addition, most permafrost-associated gas hydrate accumulations probably developed from preexisting free-gas fields that originally formed in conventional hydrocarbon traps and were later converted to gas hydrates upon the onset of glaciation and cold Arctic conditions.”

But the USGS cautioned that “given that relatively few wells have penetrated the expected gas hydrate accumulations in these three AUs, there is significant geologic uncertainty in these estimates.”