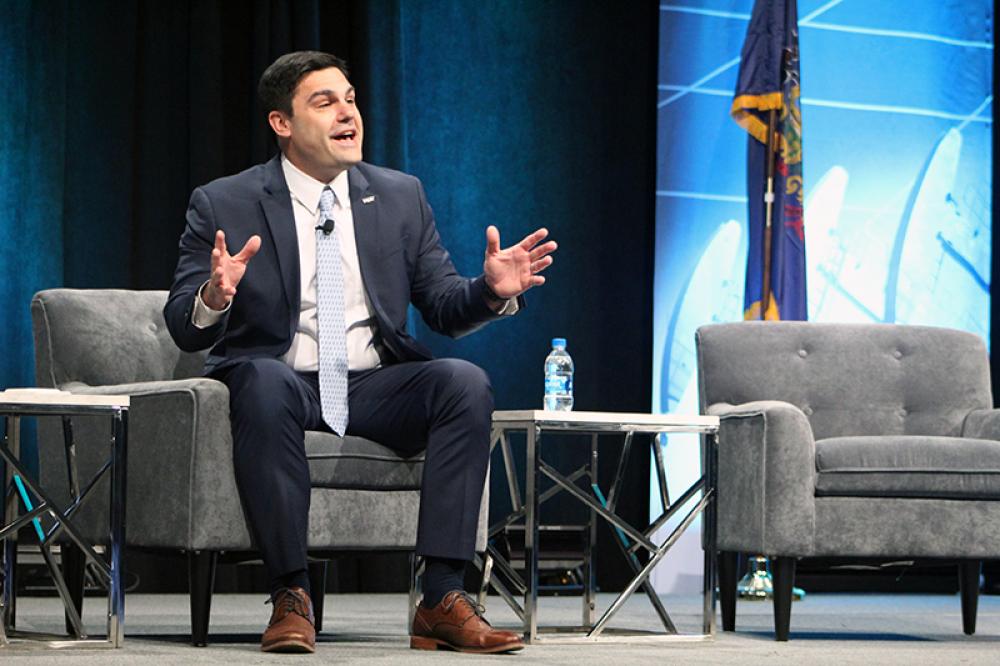 “We shouldn’t be thinking about cutting down LNG exports, we should be thinking about doing more,” said Toby Rice, president and CEO of EQT Corp., speaking at Hart Energy's DUG East & Marcellus-Utica Midstream conference and exhibition on Dec. 7.

PITTSBURGH—U.S. LNG holds significant potential to put the country on track to achieve its sustainability goals, according to Toby Rice, CEO of EQT Corp., the largest natural gas producer in the U.S.

“The facts are clear. U.S. LNG powered by the Marcellus shale is the biggest green initiative on the planet,” Rice told attendees of Hart Energy’s DUG East & Marcellus-Utica Midstream conference and exhibition on Dec. 7. “We shouldn’t be thinking about cutting down LNG exports, we should be thinking about doing more.”

Rice said he is extremely bullish on natural gas, adding that the growth engine for domestic gas producers will be international LNG.

Making a clear case to ramp up LNG exports, Rice explained that out of the 30 billion tons of the carbon emissions globally, 14 billion comes from from foreign coal powered generation.

“Put this in perspective, one of the reasons we’ve been able to bring down emissions in U.S. by over 970 million tons per year is because of the switch we made from coal to natural gas,” Rice noted, stressing that natural gas production helps offset emissions from coal, which promotes sustainability.

Rice continued, “For every Bcf per day of natural gas that we use to power electricity, we are offsetting similar amounts of coal, which when burnt produces about 52 million tons of emissions per year,” he said.

If U.S. increases LNG exports to replace only China’s planned coal power plants with natural gas, Rice said it would reduce about 370 million metric tons of CO2, which is roughly equivalent to the emissions reduction impact of the entire U.S. renewables sector.

To capture this opportunity, U.S. would need to increase natural gas production by roughly 25% or approximately half the production increase seen between 2005 and 2020, a period during which U.S. saw declines in both CO2 and methane emissions.

Amid increasing concerns over gas prices, Senator Elizabeth Warren last month lashed out at top oil and gas producers, asking them to explain their decisions to “export record amounts of natural gas while imposing massive price increases" on consumers, accusing them of "corporate greed" while Americans struggle to pay their bills.

“Despite the elevated gas prices, the spot prices were well below the average price of natural gas for 2021 of $5.70 Mcf,” Rice said.

“Why is that? It’s because of U.S. shale and the work we’re doing here in the Appalachian basin and all over the country. Yes, the price of natural gas has increased rapidly relative to 2020 as the economic engines of the world have reignited, but natural gas prices in 2020 were the lowest in over two decades, a year during which we exported LNG," he said.

Because of the shale gas boom and companies like EQT, Rice said consumers in U.S. continue to benefit from some of the lowest natural gas prices in the world.

Rice went on to say that the U.S. natural gas industry needs additional pipelines and more LNG facilities to offset carbon emissions. “Hopefully, our politicians can help us spread the word about natural gas benefits, move away from foreign coal and embrace natural gas,” he said.

Rice said that LNG isn’t just a clean fuel, but also fulfills the reliability and affordability criteria of the future energy mix.

“When we think about three criteria for energy of the future, it is cheap, reliable and clean. Everyone has been prioritizing the clean aspects of energy but we have been sacrificing reliability for the cleanliness of solar and wind,” Rice explained.

He continued, “But now we’re starting to see reliability come into play. In Texas, for instance, Public Utility Commission of Texas is starting to put a price tag on reliability, which is a game changer because it is one of the biggest criteria that natural gas provides in addition to being affordable and clean…Eventually people will realize that natural gas will meet their environmental ambitions.”