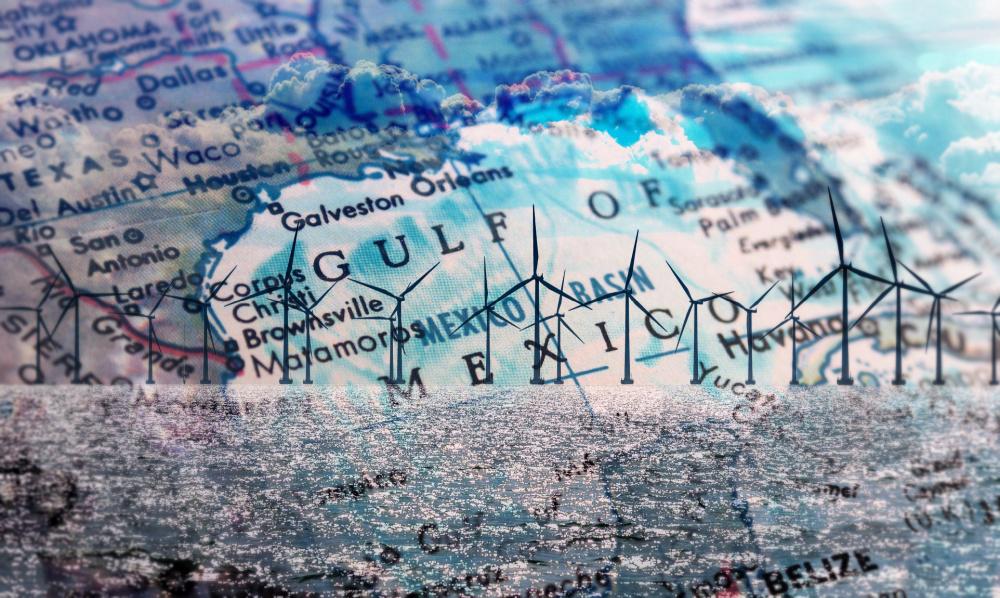 The news to expand U.S. offshore wind energy development to the Gulf of Mexico was delivered as President Joe Biden used his executive power to act on climate change in the face of some legislative inaction. (Source: Hart Energy, Shutterstock.com)

The U.S. has identified nearly 735,000 acres offshore Texas and Louisiana for potential wind energy development in the Gulf of Mexico (GoM) as the Biden administration moves to advance its clean energy agenda.

The areas—one about 24 nautical miles off the coast of Galveston, Texas, and the other about 56 nautical miles off the coast Lake Charles, La.—were unveiled July 20 by the Bureau of Ocean Energy Management (BOEM). The acreage is a sliver of the initial 30 million-acre area in the GoM the Interior Department opened for public comment in October 2021.

“BOEM used the most current scientific data to analyze 30 million acres in the Call Area to find the best spaces for wind energy development,” BOEM Director Amanda Lefton said in a news release. “We are invested in working in partnership with states and communities to find areas that avoid or minimize conflicts with other ocean uses and marine life in the Gulf of Mexico. We are committed to a transparent, inclusive and data-driven process that ensures all ocean users flourish in the Gulf.”

The news was delivered as President Joe Biden used his executive power to act on climate change in the face of some legislative inaction. The move seeks to boost offshore wind and address record heat waves wreaking havoc on communities across the nation.

Speaking in Somerset, Massachusetts, at the retired 1,600-MW coal-fired Brayton Point Power Plant that is being transformed into a renewable energy hub, Biden also announced $2.3 billion in federal funding for the Building Resilient Infrastructure and Communities program. The administration also released $385 million to states through the Low-Income Home Energy Assistance Program to help families with household energy costs.

The offshore wind areas are part of an effort to advance and expand wind energy development, including off the mid- and southern Atlantic Coast and Florida’s Gulf Coast in partnership with governors.

Following the news, the National Ocean Industries Association (NOIA) said resuming oil and gas leasing, which was paused by the Biden administration, will support offshore wind.

“We can only get there through an all-of-the-above approach, which must include the resumption of domestic offshore oil and gas leasing,” Milito said in a statement. “On a positive note, the administration continues to promote investment in the offshore wind sector, and the full supply chain of the offshore energy industry is well-positioned for the build-out of the U.S. wind sector. We look forward to advancing projects in the Gulf of Mexico and Southeast.”

Building up offshore wind has been a major part of the Biden administration’s goals on climate change. So far, only two wind farms are operating in federal waters off the East Coast—Block Island off Rhode Island and the Coastal Virginia Offshore Wind project.

“By 2025, the Interior Department plans to potentially hold up to five additional offshore lease sales and complete the review of at least 16 plans to construct and operate commercial, offshore wind energy facilities, which would represent more than 22 gigawatts of clean energy for the nation,” BOEM said.

The two wind energy areas (WEAs)in the GoM have the potential to power more than 2.3 million homes.