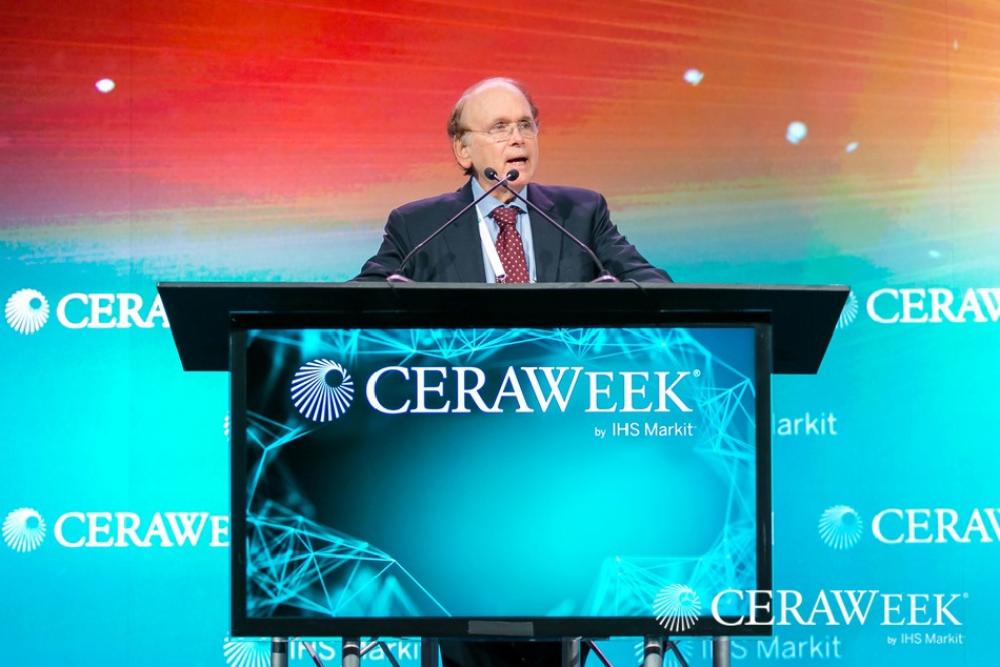 This year, the CERAWeek by IHS Markit conference in Houston is entirely virtual and numerous panels are dedicated to the transition to the low-carbon economy of the future, hydrogen technologies and climate change. (Source: Image of CERAWeek Founder Dan Yergin speaking at a previous conference by IHS Markit Ltd.)

Former U.S. Secretary of State Mike Pompeo took the stage at the world’s largest energy conference in 2019 to declare an age of U.S. dominance after a decade of rapid shale development made the United States the world’s top oil and gas producer.

Two years later, the oil industry is recovering from the worst recession it has ever experienced after measures to contain coronavirus stopped billions of people from traveling and wiped out one-fifth of worldwide demand for fuel. The U.S. fossil fuel industry is still reeling after tens of thousands of jobs were lost.

The pandemic has also accelerated the energy transition, interrupting a steady rise in fuel consumption that may have otherwise continued for several more years unabated. Oil demand may never recover from that hit. This year, the CERAWeek by IHS Markit conference in Houston is entirely virtual and numerous panels are dedicated to the transition to the low-carbon economy of the future, hydrogen technologies and climate change.

“The tone is different: There’s one theme that permeates the entire conference and that is energy transition,” said CERAWeek Founder Dan Yergin, vice chair of IHS Markit.

Last year’s conference was one of the first major global events to be canceled as the pandemic started to rage and quickly made it unfeasible to gather thousands of people from 85 countries at the conference venues.

To be sure, the 2021 program includes oil leaders who typically appear at CERAWeek. They include Mohammed Barkindo, secretary general of OPEC, and the CEOs of Exxon Mobil Corp., Total SA, Chevron Corp. and Occidental Petroleum Corp.

But they will participate in panels focusing on the energy transition. Barkindo will discuss what kind of a recovery oil and gas will have as future demand is challenged. BP's Looney will join Andy Jassy, who is set to become Amazon.com Inc.’s CEO later this year, on a panel about reinventing energy. Occidental CEO Vicki Hollub and Ahmed Al Jaber, United Arab Emirates minister of state, are slated to tackle cutting carbon emissions.

Oil companies have come under increasing pressure from shareholders, governments and activists to show how they are changing their businesses from fossil fuels toward renewables, and to accelerate that transition.

“This year’s program reflects the reality of the transition toward a net zero future,” said Julien Perez, vice president of strategy and policy for the Oil and Gas Climate Initiative, a consortium of major oil companies.

Yergin said Gates will discuss the difficulty in reducing emissions to slow temperature rise around the world. He is expected to focus on the technologies that are missing, but required, from the energy transition.

“You’ll often go to conferences where people say, ‘Hey, let’s get companies to report their emissions and somehow magically make the emissions go away, or we’ll just divest the stocks,’” Gates told Reuters in an interview earlier this month.

The reality, Gates said, is much tougher. Many heavy industries that use oil and gas are hard to shift away from those fuels, and that is where new technologies are needed. Steel, for instance, still relies on furnaces fired by metallurgical coal.

While the shared goal of carbon neutrality has now become widely accepted, finding the best way to reach that goal is much more difficult, Yergin said.

“Previous energy transitions unfolded over centuries. This is meant to unfold over less than three decades—that’s a really heavy lift,” he said.

Oil prices have rebounded to the highest levels in about two years, helped by restraint on supply by OPEC and allies.