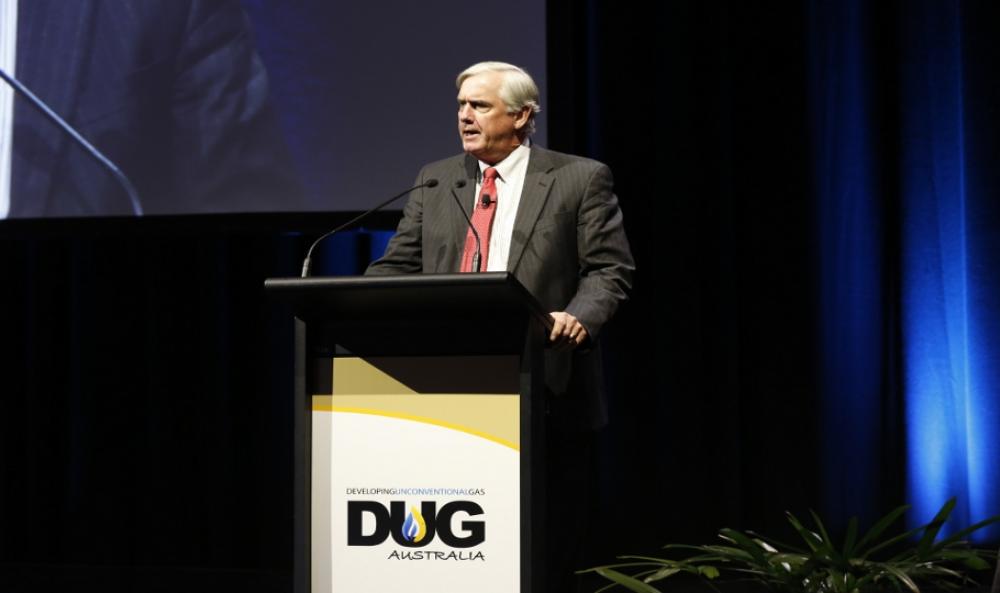 BRISBANE, Australia—Australia faces the same types of challenges that North America has met over the past eight years in developing unconventional plays. No matter where you operate, the need to understand the rock is paramount in opening oil and gas resources from nano-darcy formations.

“From a geological viewpoint, we’ve got to get as much rock data as we can. We have to get core data and open-hole data sets on these exploratory and early-appraisal wells and basically tear that data apart. What we then have to do is calibrate that core data to as much of the basinal data we have to create a petrophysical picture with a fairly limited data set,” said Dick Stoneburner, senior advisor, Pine Brook Partners, at the DUG Australia conference on Aug. 27.

“What I have done is taken most of the successful American plays and broken them into what I call emerging, evolving and mature plays,” he explained. “I am trying to give you some sense of what we’ve been able to accomplish over the years. Prior to 2006, we really didn’t have a very good plan or technology to complete the rock effectively. When we were able to do isolated, multi-stage hydraulic fracturing, we were then able to crack the code.”

As Stoneburner mentioned, there are geological, drilling and producing aspects associated with each of these maturity levels. “I challenge you early on to establish as much as you can about that core area. Make sure you’re in the right rock to spend the capital necessary to test that particular play.”

Although an operator has to start out with a fairly conservative drilling approach in an emerging play, he would need to move away from that conservatism going from the emerging to the evolving play.

“Understanding the fluid types, proppant types and geometry in a new basin is very challenging. It takes a lot of time, as well as trial and error, but we have to start working on that in emerging plays,” he continued.

The emerging plays he described were the Utica, Tuscaloosa Marine Shale, East Texas Eagle Ford and stacked plays in the Anadarko Basin.

About two-and-a-half years ago, the Utica was described by Aubrey McClendon as the next Eagle Ford. Data was limited because there had not been any drilling in the area for decades.

“I will tell you a lot of operators were in that core area. Unfortunately, most didn’t find the right area and spent about $1 billion doing that,” he emphasized.

In the Tuscaloosa Marine Shale, operators have known for about 20 years that oil is there. However, the companies that were in the play earlier were not what Stoneburner would call experienced shale operators and had very poor results. Since then, three experienced main players have been involved and improved results with 30-day IPs in the 800 to 900 bbl/d range.

“The problem is that about one in four wells has some sort of engineering failure. It is deep. It is hot. It is highly fractured. There are a lot of failures particularly on the completion side,” he added.

In the East Texas Eagle Ford, it took operators some time to get a good understanding of the physics involved. It is a matter of doing the petrophysical homework and understanding what may not look great could be great if you do the right work to uncover it.

“Use different methods. One of these is the Passey Method, which is basically utilizing sonic and resistivity tools as opposed to conventional density neutron logs. A lot of these shales will more readily reveal themselves with this,” he said.

The stacked play in the Anadarko Basin was discovered by Newfield in the last 12 to 18 months. “What happened with Newfield is that they were drilling in the known Woodford play and encountered good shows and interesting rock. They did all of their homework and defined a new play simply by understanding what the play was,” he continued.

In moving from emerging to evolving plays, the more data you have the better geophysical model you can create.

“It is really important to understand the fluid types you’re using and that the geometry of that particular completion is appropriate to contact as much rock as you can?what is called stimulated rock volume.

“One thing I think is especially overlooked in a lot of wells is getting as much production log data as possible. You really don’t know that wellbore is performing on a stage-by-stage basis unless you put something in the hole to measure it,” he continued.

Restricted-rate production is also important to maximize production. In the Haynesville, for example, there is a lot of pressure-dependent permeability in the nano-darcy reservoirs.

“You can affect a lot of permeability early in the well life with your fracture stimulation. But if you lose that permeability by overproducing the well and allowing pressures to drop dramatically, you can effectively lose a lot of productivity. I would encourage you to study the effects of pressure-dependent permeability anyhow you monitor that surface pressure,” he explained.

He listed the Niobrara Shale, Delaware and Permian basins as evolving plays, emphasizing, “Know your rock. Know your play.”

“You are really trying to understand how many wells per section or how you are going to space this development. Quite honestly, I don’t think we have a very good handle on this in many plays at all. It is going to take quite awhile to really understand how these reservoirs drain,” Stoneburner said.

He feels pretty strongly about the concept of geometric vs. geologic completions. “Throughout my upstream career, virtually everywhere we wanted to stimulate every inch of that well bore. In a lot of cases all that wellbore wasn’t worth stimulating if you knew more about the rocks. I encourage you to get more open-hole data on these laterals with quad combos or anything you can do to learn more about the wellbore itself and design your completions based on that geology as opposed to geometry.”

He listed the Barnett, Haynesville, Fayetteville and Bakken as mature plays. The Barnett was the first shale play in North America. But, he warned, it took George Mitchell 20 years to understand the rock.

“One key lesson to learn from the Barnett is to look for the bottom seal for the shale formation. A lot of companies did not understand that a bottom seal was needed between the Barnett and the Ellenberger, which is a prolific water-producing reservoir in the area. I encourage you to not just focus on the rock, but focus on what is around you and what are frack barriers. How is that well going to frack relative to above and below the shale? It is very important to understand,” he added.

In looking at the Fayetteville, Stoneburner said to understand your structure. “Within that section there are an abundance of faults. You can actually see trendings southwest to northeast that are less productive or faulted areas that prove you can’t drill horizontally across these faults. When you are going sideways, it is really problematic if you don’t have a good idea of what you are going to run into,” he explained.

Stoneburner emphasized several times, “Understand what you are doing. Do not have the herd mentality and follow someone who says the Mississippi Lime is the way to go. ‘Chesapeake did it so I’m going to do it too.’ That happened a lot in this play and a lot of people lost a lot of money.”