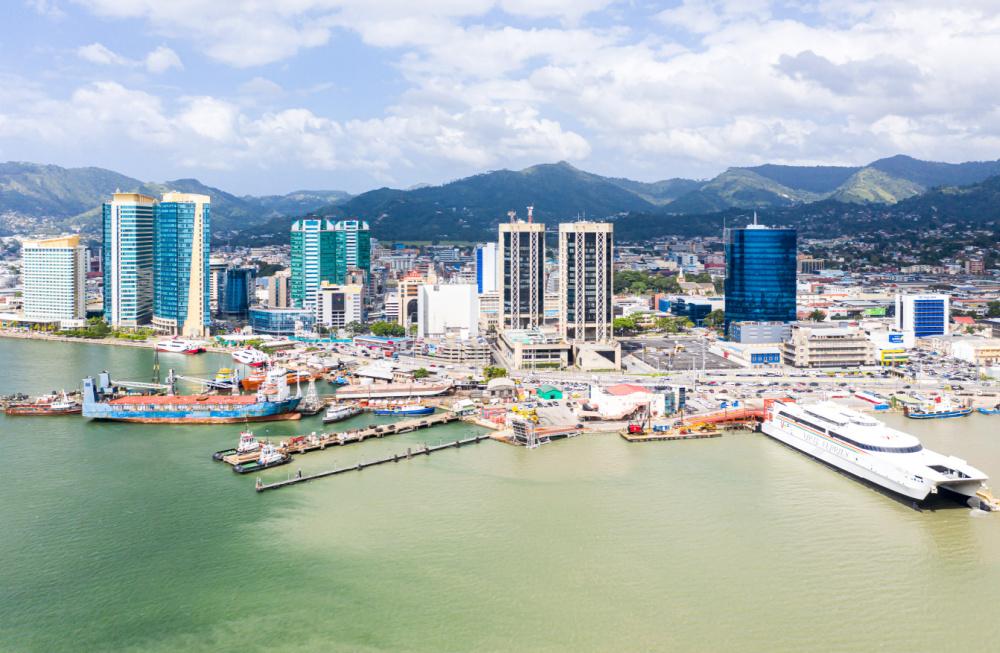 Aerial view of the Trinidad capital city Port of Spain and a busy seaport with commercial docks and passenger ships. (Source: Shutterstock.com)

HOUSTON—Caribbean natural gas producer and LNG exporter Trinidad and Tobago has unused liquefaction capacity at its Atlantic LNG export plant but lacks gas to fulfill that capacity, the country’s Minister of Energy and Energy Industries Stuart Young said during the Hydrogen Americas Summit.

“Trinidad and Tobago is unique in that right now we're the only province in the world that has immediate available capacity. What we need is natural gas… that's a different story,” Stuart told attendees at the summit on Oct. 11 in Washington, D.C.

Trinidad is currently producing just under 3 Bcf/d, down from about 4.1 Bcf/d “because we are a mature province,” the minister said.

The island’s gas production is used to feed LNG, ammonia and methanol production. However, its four-train 14.8 million ton per annum (mtpa) Atlantic LNG export plant has been operating without the 3 mtpa capacity Train 1 since December 2020.

The shuttered train at the Atlantic LNG plant is attributed to a scarcity of gas as well as ongoing discussions related to a new ownership structure for the massive complex. Shell and BP are the biggest shareholders in the Atlantic LNG export plant.

Beyond Trinidad’s maritime borders the biggest gas potential to feed its energy-dependent economy can be found next door in neighboring Venezuela, home to large non-associated gas reserves. Additionally, government officials and oil sector executives in Trinidad have for years talked about utilizing the over 2 Bcf/d of gas that continues to be flared in eastern Venezuela.

However, political uncertainties remain the top order of the day in the OPEC country amid an ongoing stalemate between the ruling party and the U.S.-backed opposition around “free and fair” elections.

The government of Trinidad and Tobago continues to promote its goods and services as part of a push to keep its products competitive as the global environment changes, minister Young said. Amid the push the country looks to do its part to combat global climate change and to reduce greenhouse-gas emissions.

In 2021, Trinidad was the second largest exporter of ammonia in the world. The country has about 5 mtpa of capacity to produce ammonia and last year exported about 3.2 million metric tons of ammonia.

Trinidad boasts ammonia, methanol, urea and UAN plants which are located in close proximity on an industrial estate. The plan is to aid the plants to capture the carbon to assist them with their decarbonization plans and to move to blue hydrogen, the minister said. While Trinidad sees hydrogen as very important, it is also doing things related to methane.

Trinidad recently signed off on the addition of 112.2 megawatts of solar power that will add energy to its electric grid while it’s currently involved with studies with the Inter-American Development Bank (IDB) about the potential for wind farms.

“So we see the use of all of these renewables, firstly the solar and then the wind farms, to be able to help us to produce the hydrogen through the new and green technologies, to then introduce that into the energy security of Trinidad and Tobago as we utilize our natural gas in other areas,” Young said.

Trinidad looks to remain competitive, contribute to its and global energy security with use of existing technologies. CCSU, hydrogen, solar and wind are key areas where investors have clear opportunities to invest.

“These are where the opportunities come for you all to invest in Trinidad and Tobago,” Young said, adding there were numerous opportunities for the private sector to work with the government led by Prime Minister Keith Rowley.

The minister said the government is looking to move to put in place the necessary legislation and regulations to assist investors who have invested in the island’s plants as the country recognizes “that globally the cleaner the energy products going forward in the future, the better.”

“We’re going to clean up our methanol, clean up ammonia, and other products,” Young said. “We are also in the phase of negotiating with the multinationals that own the LNG trains to see how we can also move in the future to better decarbonize those products.”