The oil and gas industry is increasingly aware of the dangers presented by HP/HT environments. The result is a trend toward water-based hydraulic fluids, which are considerably more fire-resistant. However, there has been insufficient knowledge of the effects of high-temperature exposure of sealing materials within water-based hydraulic fluids. In fact, until Trelleborg Sealing Solutions and fluid producer MacDermid partnered to investigate the effect of water glycol fluids on common seal materials, there had never been comprehensive testing conducted at high temperatures.

Water glycol fire-resistant hydraulic fluids (HFCs) are well-suited for offshore installations, both on surface equipment (e.g., motion compensation cylinders) and subsea equipment as a control fluid for valves and BOPs.

Because of their fire resistance and hydraulic properties, HFCs are the most commonly used hydrous hydraulic fluids. They are often used in situations where hydraulic fluid escaping under high pressure can ignite on contact with hot materials. At temperatures above 600 C (1,112 F), these fluids shouldn’t ignite or continue to burn. They are typically used at operating temperatures of -20 C to 65 C (-4 F to 149 F) and up to working pressures of 3,625 psi.

Viscosity temperature behavior should always be considered when selecting a hydraulic fluid because evaporation may occur. Water loss can adversely affect lubrication quality, pH and viscosity. Any added water must be soft de-ionized or distilled as the magnesium and calcium in potable water will likely react with additives, causing them to precipitate out of the fluid and compromise fluid performance.

Ideal operating temperatures are below 65 C to minimize evaporation; in practice, they can be significantly higher. Reservoir temperatures above 50 C (122 F) must be prevented in open systems because they can lead to serious water loss and an accelerated aging process in the hydraulic fluid. Importantly, in HFCs high amounts of water loss can lead to both an increase in viscosity and a reduction in fire-resistant properties.

It’s critical that the hydraulic fluid does not negatively affect the materials used in the components within any system that uses HFCs. Compatibility with coatings, seals, hoses, metals and plastics should be observed to prolong the service life and integrity of equipment.

In 2016 Trelleborg Sealing Solutions and MacDermid developed a series of tests that took place over a 90-day period on seven seal materials, six HFCs and three temperature ranges. These elastomeric and thermoplastic compounds were immersed in HFCs at a range of elevated temperatures up to 200 C (392 F). Each seal and fluid formulation was tested for hardness, tensile strength, strain and volume. The seals were photographed before and after the test to document all physical changes. 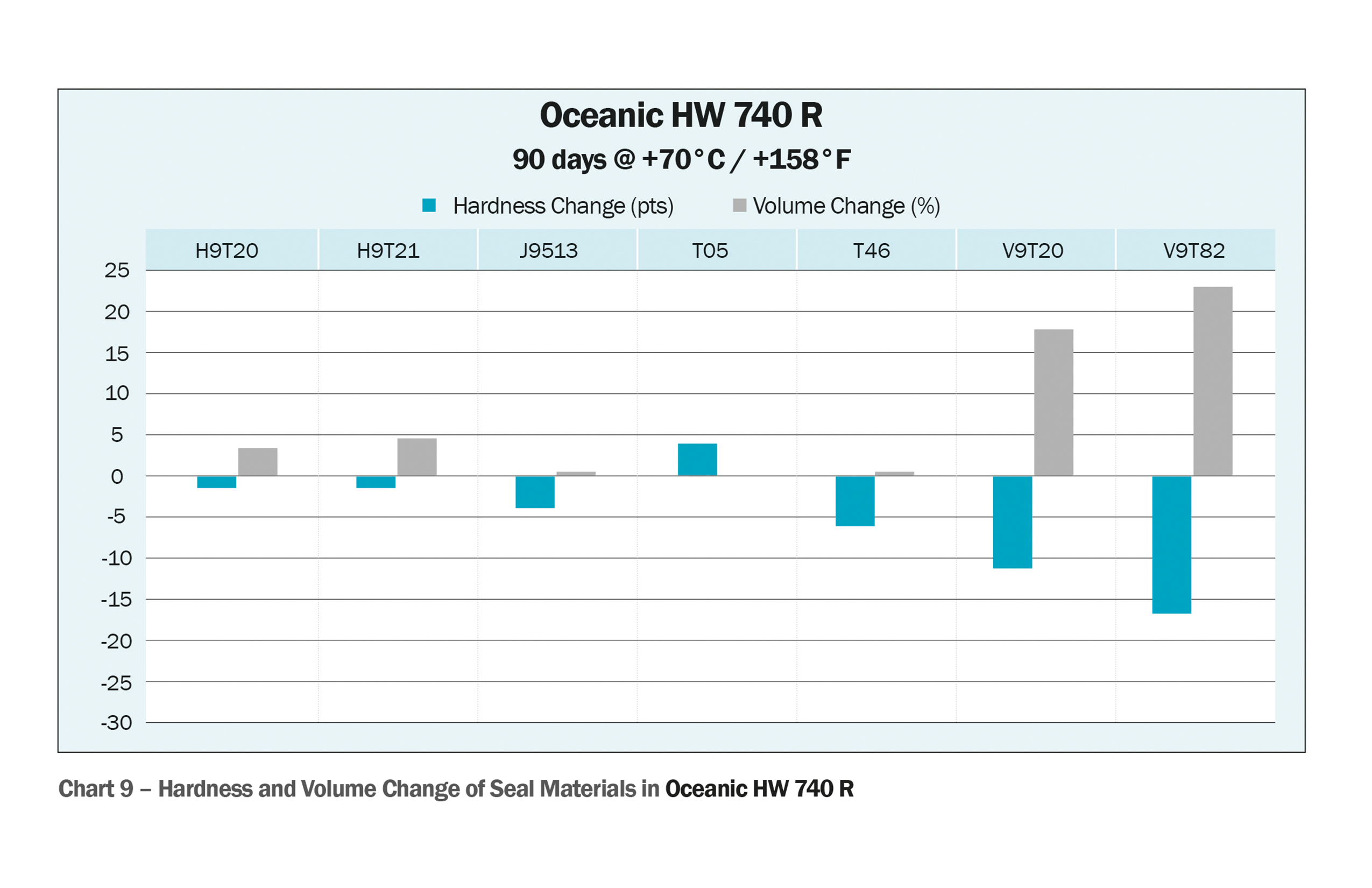 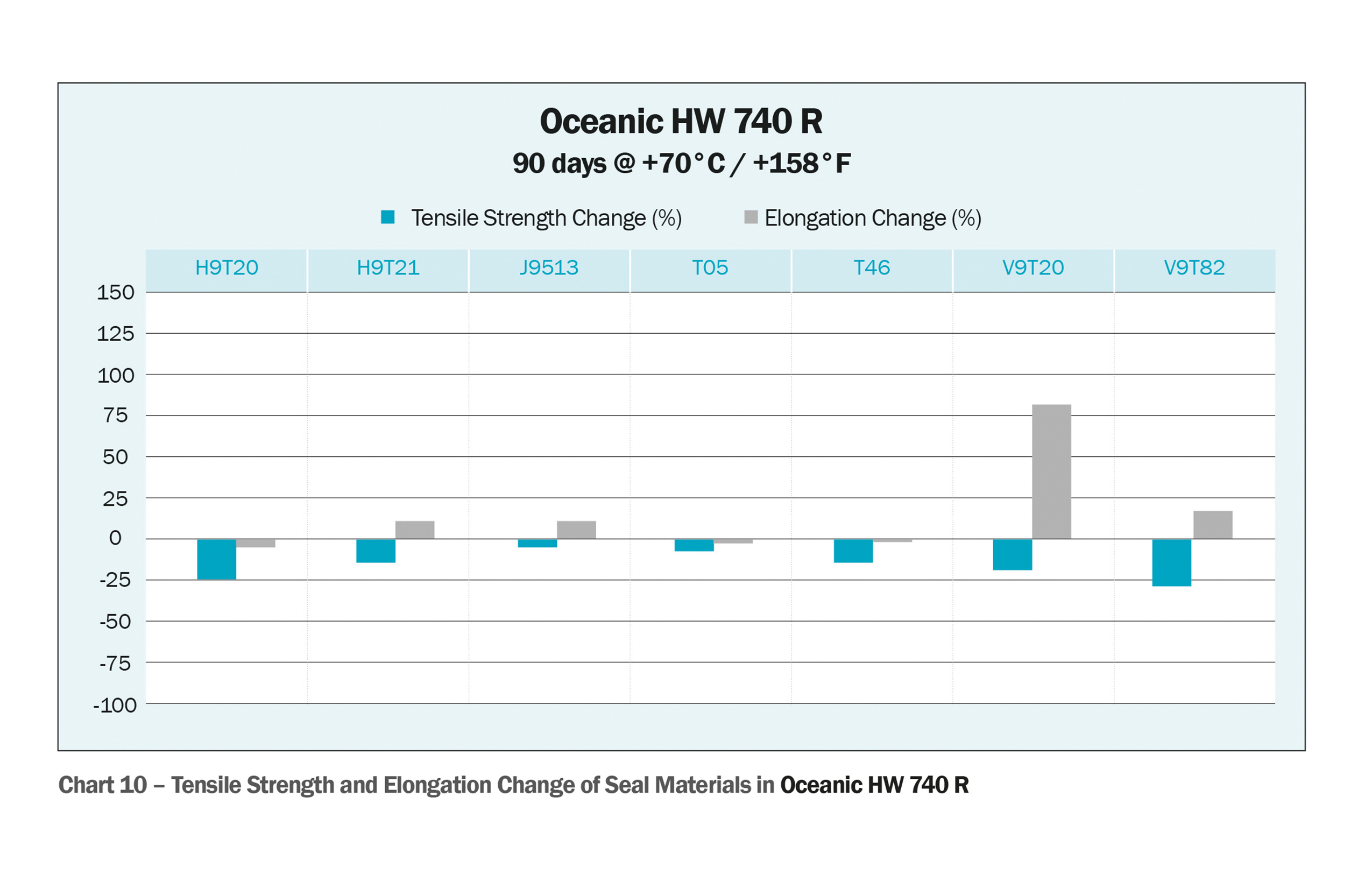 FIGURE 2. Tensile strength and the elongation change of seal materials in Oceanic HW 740 R were measured in the study. (Source: Trelleborg) 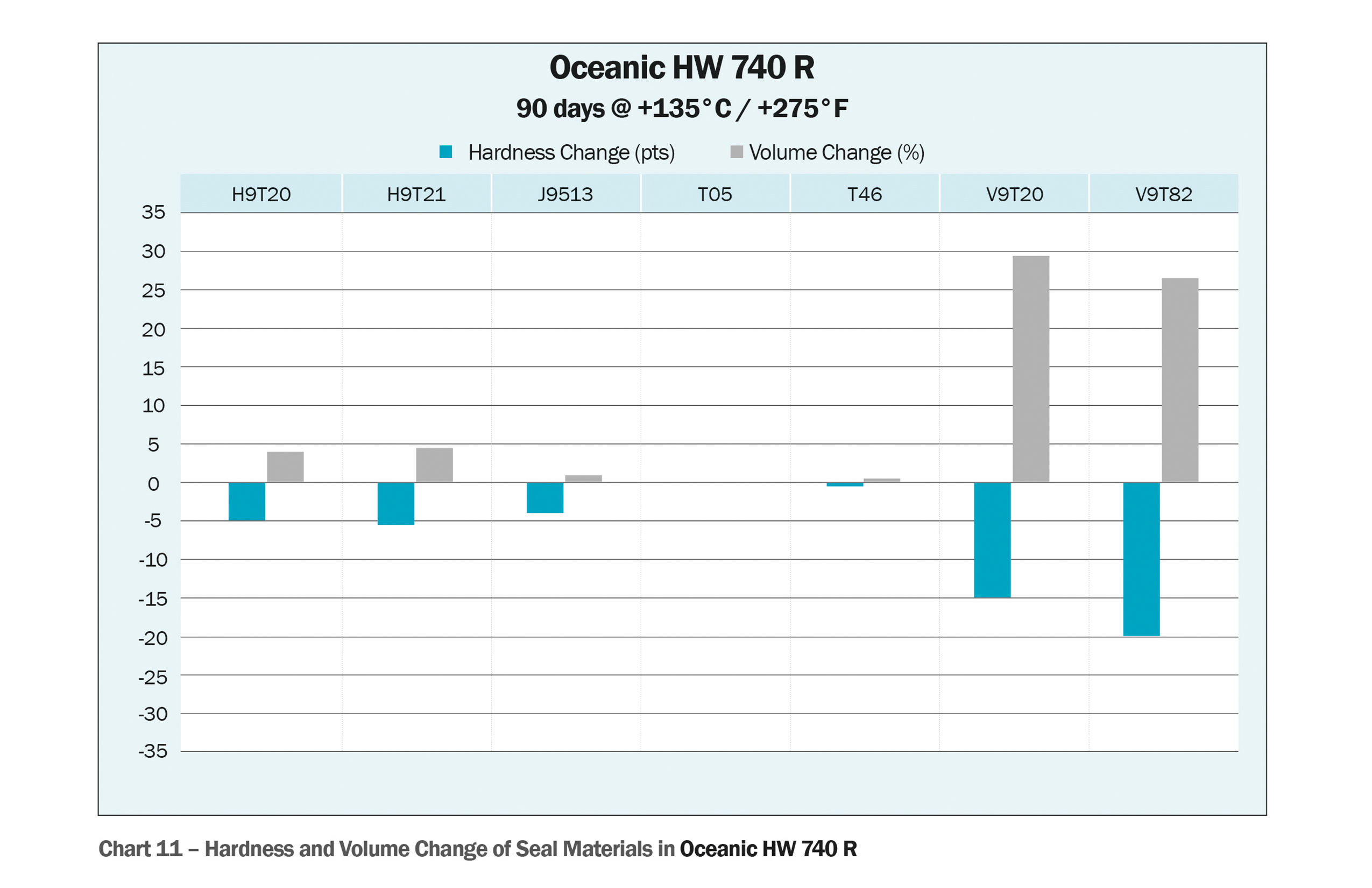 FIGURE 3. The hardness and volume change of seal materials in Oceanic HW 740 R at +135 C are shown. (Source: Trelleborg) 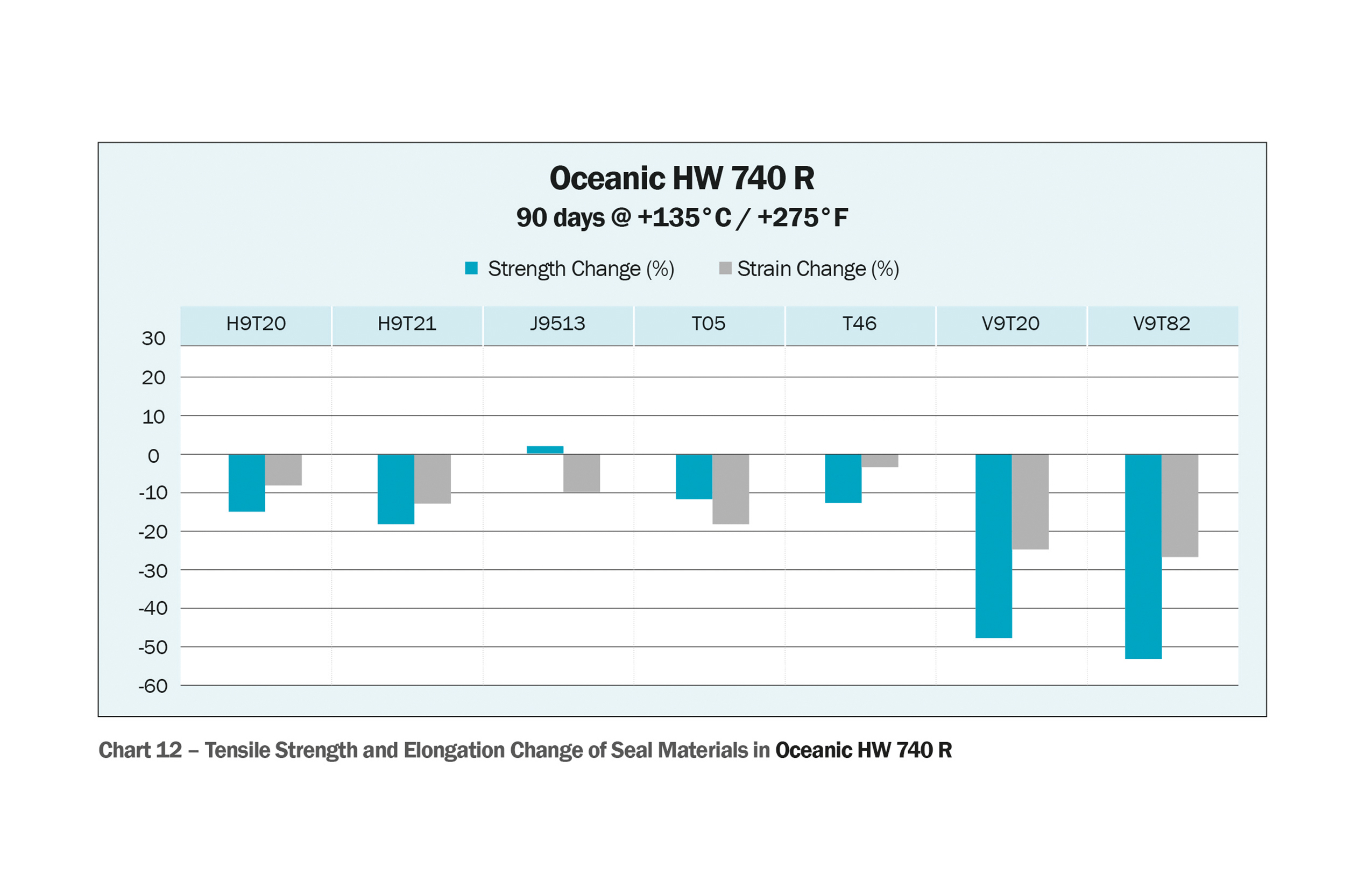 Test results of advanced elastomer materials such as hydrogenated nitrile butadiene rubber (HNBR) compounds like XploR H9T20 and H9T21 exhibited slight changes in hardness, volume and strain. With Oceanic HW 740 R (and other HFCs) up to 70 C there is a more pronounced change in these properties when testing at temperatures of 135 C. The HNBR property change from 70 C to 135 C is typical because rubber materials generally lose properties as temperature rises. Results for HNBR are well within acceptable seal performance and operational limits. The best combination of compatibility and material property retention is at temperatures up to 135 C.

For temperatures above 135 C fluoropolymer (FKM) materials can be a good solution. However, testing indicates that water-based HFCs create a substantial change to the properties of FKM at both 70 C and 135 C, suggesting that FKM would not be recommended for applications involving these fluids.

By comparison, relatively small changes were found in the properties of perfluoroelastomer Isolast J9513 and Turcon polytetrafluouroethylene (PTFE) materials. At temperatures above 135 C these materials manage well with high-temperature applications involving HFCs. Today deepwater wells are reaching temperatures up to 200 C. Additional testing has shown that PTFE materials retain a significant portion of their material properties in high-temperature water glycol fluids.

The material compatibilities described do not automatically result in success but rather serve as a guide. Extra additives to suit particular applications are options for offshore operators, although they were not part of the Trelleborg tests. Extra additives could deliver material incompatibilities and adverse effects on sealing materials. Chemical incompatibility could lead to accelerated aging in the hydraulic fluid and increased degradation of sealing components. Individual applications should be reviewed to optimize the seal materials with the HFC. It is important that seals are proved in specific applications and fluids and under actual operating conditions to ensure seal performance and life.

Have a story idea for Offshore Solutions? This feature highlights technologies and techniques that are helping offshore players overcome their operating challenges. Submit your story ideas to Group Managing Editor Jo Ann Davy at jdavy@ hartenergy.com.