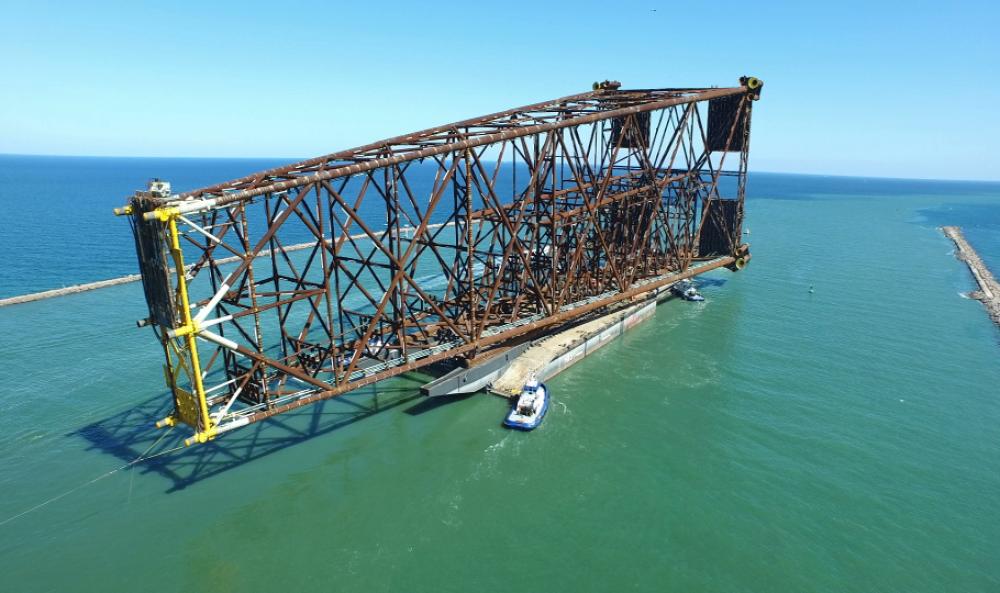 The jacket, at 380 m tall, lifts the Coelacanth platform into the record books as the third-tallest fixed platform in the GoM. (Source: Walter Oil & Gas Corp.)

It’s an oft-repeated tale in the oil and gas industry—explorationists check out an area, don’t have much success and write it off. Then new technology comes along to show them things they couldn’t see on older data, and it’s off to the races.

Walter Oil & Gas Corp. is one such beneficiary. Long interested in the Ewing Banks (EW) area of the Gulf of Mexico (GoM) but believing the prevailing wisdom that there were no sands beneath the relatively shallow geopressured area, the company nonetheless followed its instincts. The result? The Coelacanth Field, spudded in March 2010. First oil is expected to flow through the GoM’s third-tallest fixed platform in mid-2016. The Coelacanth platform was designed to produce 30,000 bbl/d of oil and 1.7 MMcm/d (60 MMcf/d) of gas. 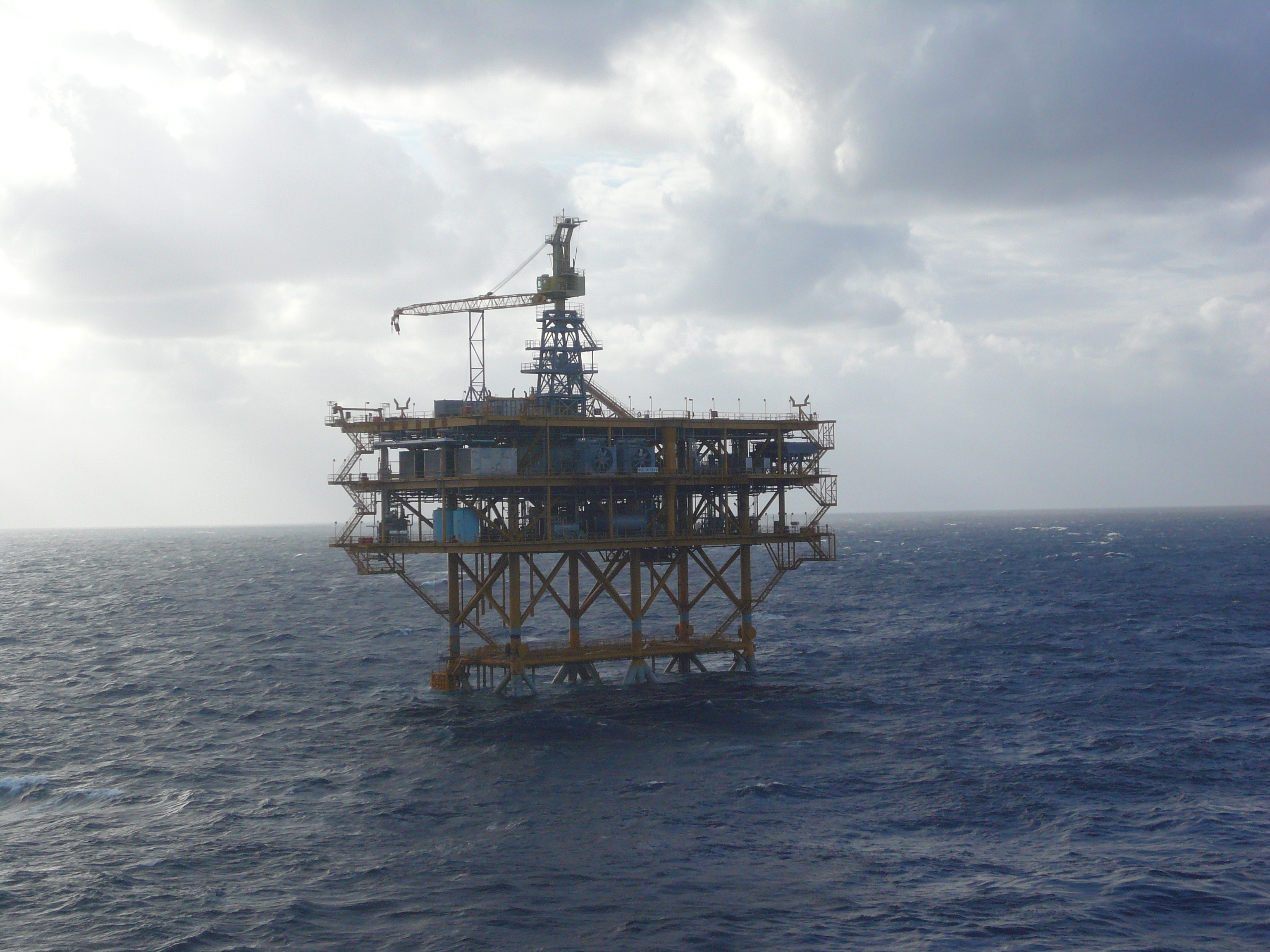 Finding Coelacanth
According to Pete Hetherington, geologist on the project, Walter had begun exploring in the area starting in the late 1990s based on an older dataset that indicated interesting anomalies below 4,572 m (15,000 ft) as well as a potential play around 2,743 m (9,000 ft). The company had other production in the area and knew there were Pleistocene sands trapped against a salt dome.

The company leased EW Block 834, the discovery lease, in 2006, and in 2007 TGS Nopec released a new multiclient dataset, “Sophie’s Resolve,” that used improved acquisition parameters and a better migration technique to image the deep geopressured section. Though no deep well control was present, the dataset showed high-amplitude events at depth indicating that hydrocarbon-filled sands might be present. These observations ran counter to conventional thinking at the time.

According to Hetherington, these seismic anomalies tied to the Middle Miocene, but this section was assumed to be shaly in the EW area. The Middle Miocene section is very sandy onshore and near the present coastline, but for many years, “nobody had thought to project them 70 miles [113 km] into Ewing Bank because, in the intervening area, wells drilled into this section had only encountered deepwater shales,” he said. “But because of cyclical climatic variations, the location of sand depocenters
changes. During geologic periods of warming, sea levels rise up to 200 m [656 ft]. There’s a lot of water, and the shoreline retreats backward. That’s where most sands are deposited. When the global climate changes and cools, the shoreline moves seaward (progrades) as much as 100 miles [161 km]. Thus, there are two big depocenters, and they’re roughly the same age, but one was deposited during glacial periods and the other during interglacial periods. During the early part of my career, no one thought there was any potential in the deep water because we were looking at things from the perspective of where the shoreline is today.”

Prevailing wisdom also assumed that the pressure and temperature would continue to rise as the drillbit went deeper, making reservoir conditions unlikely. “The magic in the deepwater areas is that companies are drilling to 30,000 ft [9,144 m] and go into a pressure/temperature regression,” he said. “That’s where you find well-developed Middle Miocene sands.”

Based on this theory, the new dataset and deep discoveries in surrounding blocks, Walter made the decision to drill the prospect. And then things got dicey.

Too Much Information
By the time the company put the development concept together geologically, Hetherington said, it was in the 2008-09 period, and the bottom had dropped out of the market. The private Houston-based company desired to have partners to drill the $50 million well, but it was not the best time to be selling this type of expensive exploratory prospect. After some effort Walter assembled a joint-venture (JV) group comprising multiple companies that currently includes Ridgewood Energy Corp. as manager for its funds and for ILX Holdings LLC (a Riverstone Holdings LLC company), Gordy Oil Co. and Houston Energy Deepwater Ventures LLC.

The timing of the spudding also was tough. Two months after spudding the first well, the Deepwater Horizon incident happened, and a drilling moratorium was declared in the GoM. The government allowed Walter to drill the well to 4,572 m before halting its progress.

By the time the moratorium was lifted, many of the drilling vessels had gone to other parts of the world. Due to the water depth—361 m (1,186 ft)—the well was too deep for a jackup rig but too shallow for a drillship. A semisubmersible rig was required.

As luck would have it, Diamond Offshore’s Ocean Victory had some free time in between jobs. The well was deepened to 6,100 m (20,000 ft) in 2012, and the discovery was announced.

Since then, Walter has put together a leasehold position in the area that includes acreage in EW blocks 790, 834 and 835 and Mississippi Canyon Block 793. Assembling that position was no easy feat.

About 17,600 acres were acquired by Walter via multiple federal offshore lease sales and acreage purchase and co-development arrangements. The company negotiated and entered into more than a dozen commercial agreements with seven different offshore companies, including majors, large independents and small independents, to establish the JV.

“The commercial side of Coelacanth was unique and challenging,” said Chad Elias, offshore land and legal manager for Walter. “This project demonstrates that the Gulf of Mexico remains an exciting arena for joint-venture efforts.”

Picking A platform: Surface Or Subsea?
With acreage secured, the next challenge was to determine the best way to bring Coelacanth online.

“When we finished drilling the initial well in late 2012, we were still determining next steps,” said Jack Horton, construction manager for Walter. “We considered subsea as we have other subsea wells in the area, but at that time we also knew that it would take more than one well to fully develop the prospect. The drilling costs associated with floating drilling rigs at that time were very expensive due to the moratorium. So we looked at different scenarios to develop the field.”

“Eventually, we decided that the fixed-leg platform would be the most economic choice,” Horton said.

The selection of a fixed-leg platform eliminates the production issues associated with the high-pressure oil zones and allows additional savings on future operations, according to the company. In lieu of a semisubmersible rig, a lower cost platform rig can be used to drill the development wells. Fixed-leg platforms provide the added benefit of being much easier to perform routine maintenance and repair to keep the wells flowing should the need arise.

“On the surface, you can work on your wells pretty easily, whereas with subsea, you can’t,” Horton said. “To do so, you have to get either a rig or some type of ROV vessel out there to work on them, and that gets very expensive every time you want to enter the well.”

The decision to go with a surface platform over subsea did raise a few eyebrows. However, Ron Wilson, president and CEO of Walter, believes it was the best choice for the field.

“We’re one of the most active companies in the Gulf of Mexico to use subsea completions,” Wilson said. “Our selection did surprise the industry a little bit, but everyone has been very supportive of our effort.”

Building Coelacanth
With the decision made, the company began in early 2012 with the design of a platform that would at the time of its installation at EW 834 stand at 380 m (1,250 ft) tall and weigh in at 30,000 short tons in 361 m of water. The size of the jacket required some reverse thinking.

“We talked with various engineering firms about the platform design and also with installation contractors. With a jacket this size, you have to launch it, and there are only a couple of launch barges in the world that could handle a jacket of this size,” Horton said. “We had to nail down who we were going to use for the installation prior to ever starting the actual design of the platform because the platform had to fit that particular launch barge.”

With Heerema’s H-851 barge—the largest in the world at 260 m (853 ft) long—secured, the platform’s 30-year design contract was awarded to OFD Engineering. Gulf Marine Fabricators LP (builders of Bullwinkle back in the late 1980s) was contracted to piece the design together and bring the Coelacanth platform to life at its facilities in Ingleside, Texas.

“Gulf Marine fabricated not only the jacket but also the topsides and the pilings,” Horton said. “Construction began in March 2013, and we finished it in October 2015.”

According to the company, the large-diameter jacket legs were built with steel plate from Austria, which was ordered early and rolled onsite at Gulf Marine. Most of the remaining jacket cross bracing was procured from South Korea as rolled tubulars, precut to fit.

After about 2.2 million man-hours of work, sailaway to EW 834 occurred on October 15, 2015. The jacket-loading operation took 2.5 days and required that the jacket be pulled more than 400 m (1,320 ft) until it reached its final position on the H-851. The structure was pulled at a rate of 7.6 m to 9.1 m (25 ft to 30 ft) per hour using four strand jacks. Each jack has the capacity to pull nearly 2 million pounds, and the operation used about 96 km (60 miles) of high-strength steel strands to move the jacket, according to the company.

Upon arrival at EW 834, Heerema’s heavy-lift vessel Thialf installed the jacket and handled installation of the topsides. The platform is held in place by 14 piles driven through guides at the base of each main leg, three piles each on two legs and four piles on each of the other legs, to provide stability during hurricane-force winds and seas, according to the company. Each pile—at 2.8 m (9 ft) in diameter—was driven into the seabed by subsea hydraulic hammers through the guides to 137 m (450 ft) below the seafloor, according to the company. Each pile weighed about 700 short tons and was 169 m (555 ft) in length. 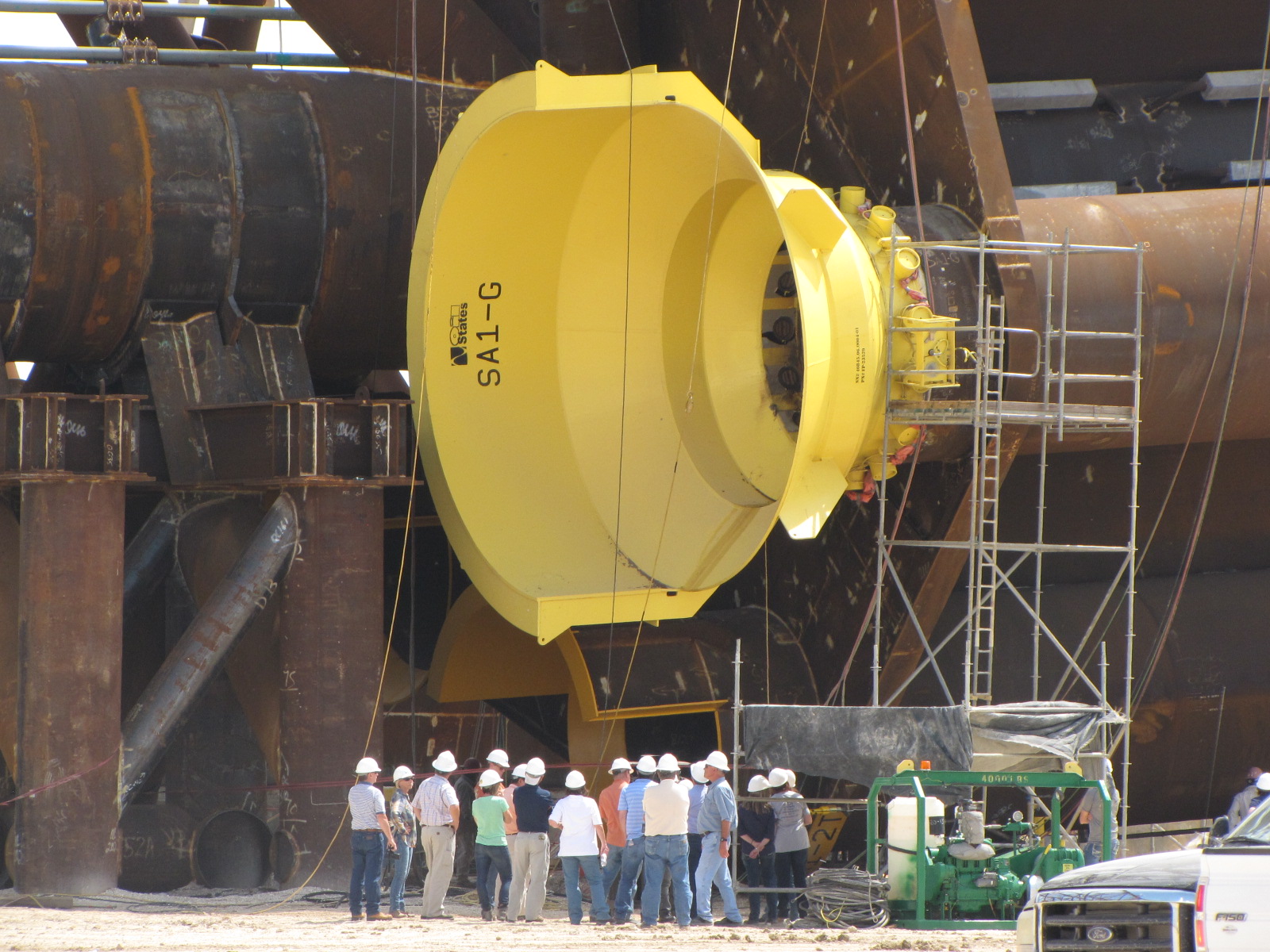 The three-level topsides also were built and equipped at the Gulf Marine yard. The top deck is the drill deck with the remaining two designated for production and processing equipment.

Exterran Corp., a service partner to Walter for more than 20 years, provided production system design, construction and equipment to the project. 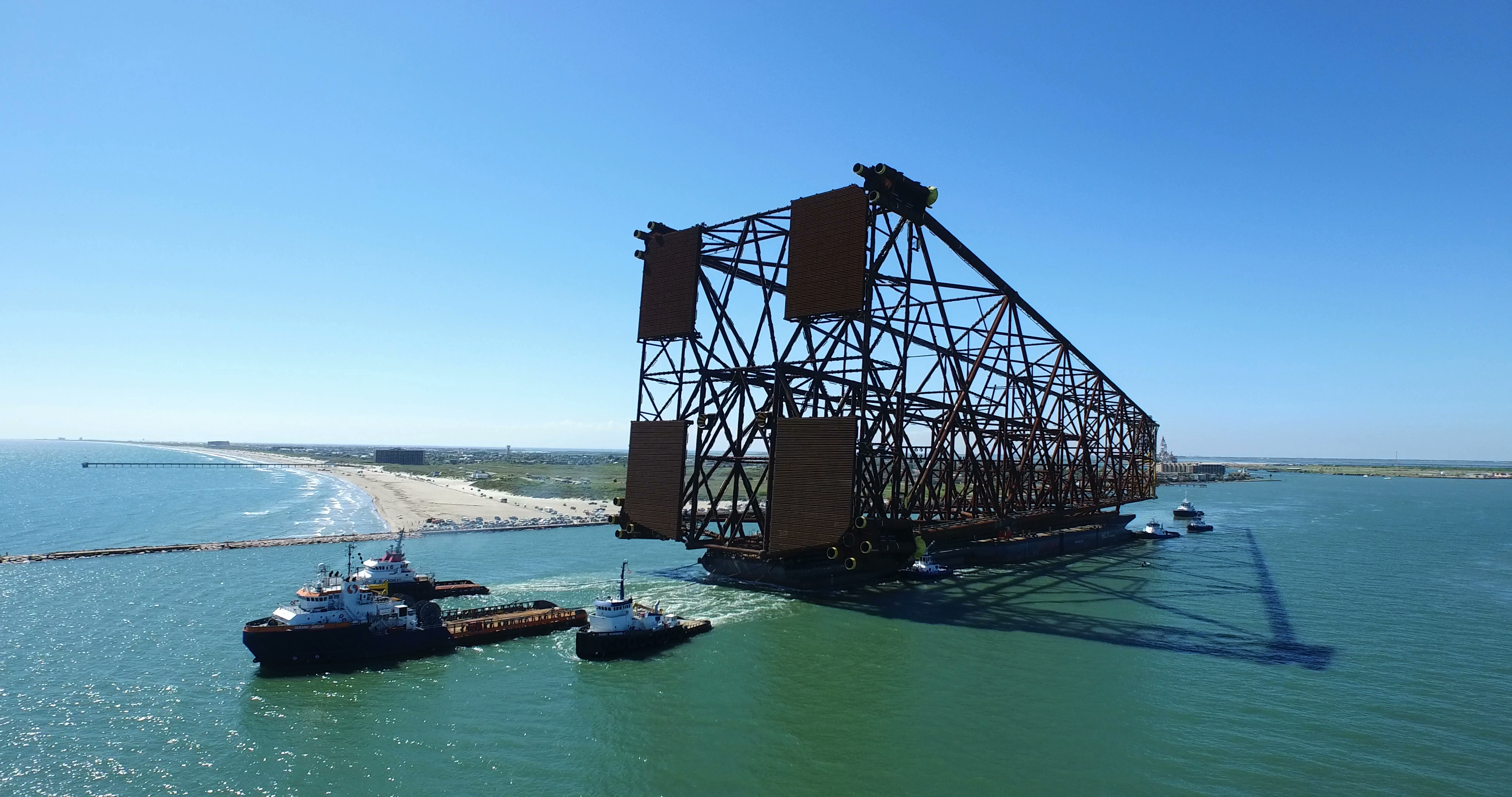 Prolific Play
The greatest challenge the Coelacanth Project presented for the team was not the jacket’s heft or topsides’ intricacies. It was something a little more pressing—time.

“The greatest challenge was meeting the schedule,” Horton said. “We had a set schedule for the installation that we had to make. Otherwise, we the stood the chance of losing the installation equipment due to its commitment to another project.”

Meeting the schedule was made possible by having a good group of people and solid relationships with vendors. Since the discovery well was drilled, Walter has acquired additional seismic data with better resolution. The data have been reprocessed for even better clarification.

According to Jim Looke, vice president of drilling and production operations for Walter, the “EW 834 Coelacanth project, despite significant obstacles, is a geologic, commercial and engineering success story, which will have a meaningful impact for years to come.” 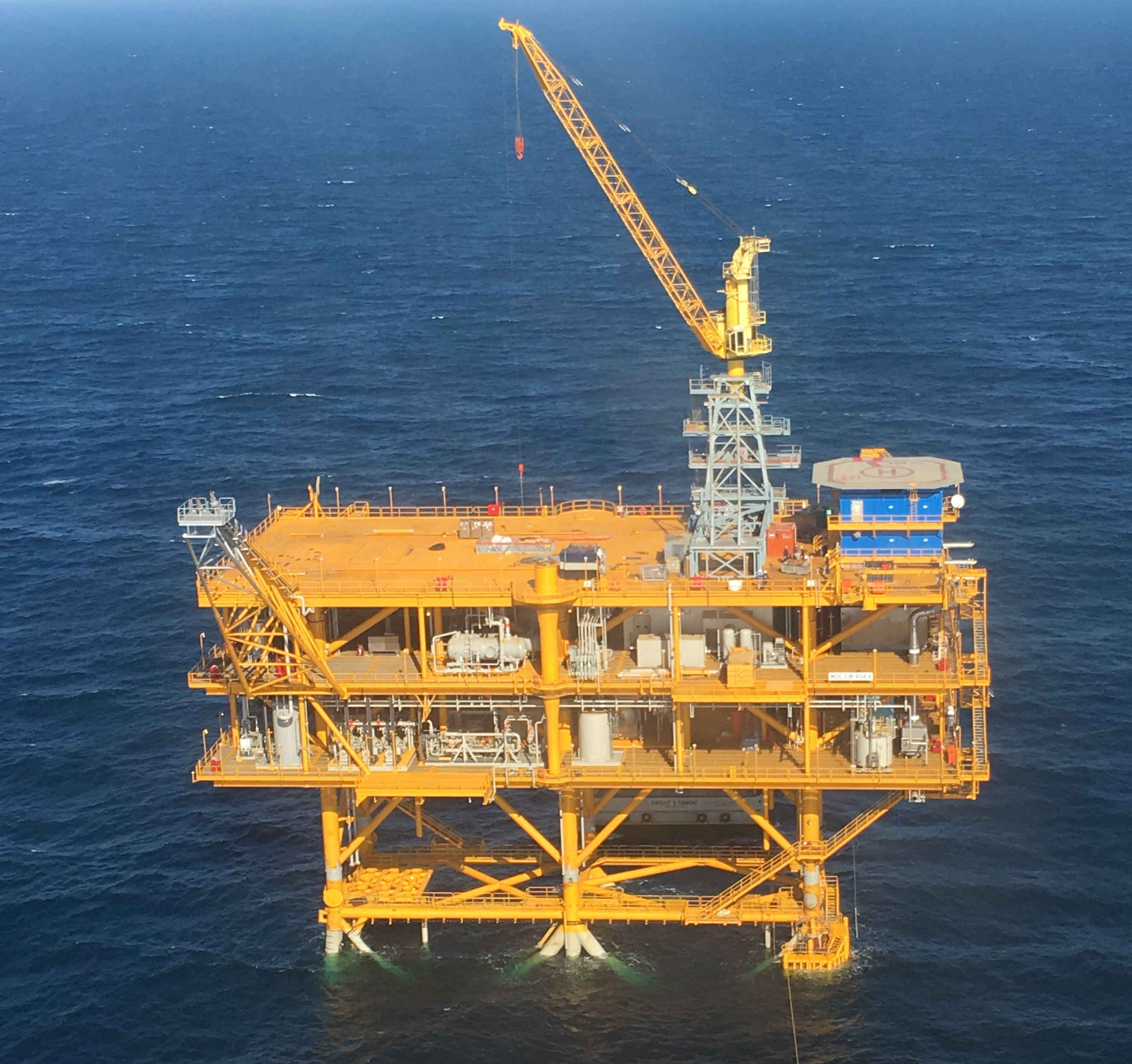 The crude oil line will link Cushing to Borger, Texas.

Expansion adds over 400,000 bbl/d of NGL capacity out of the Permian and Delaware basins.