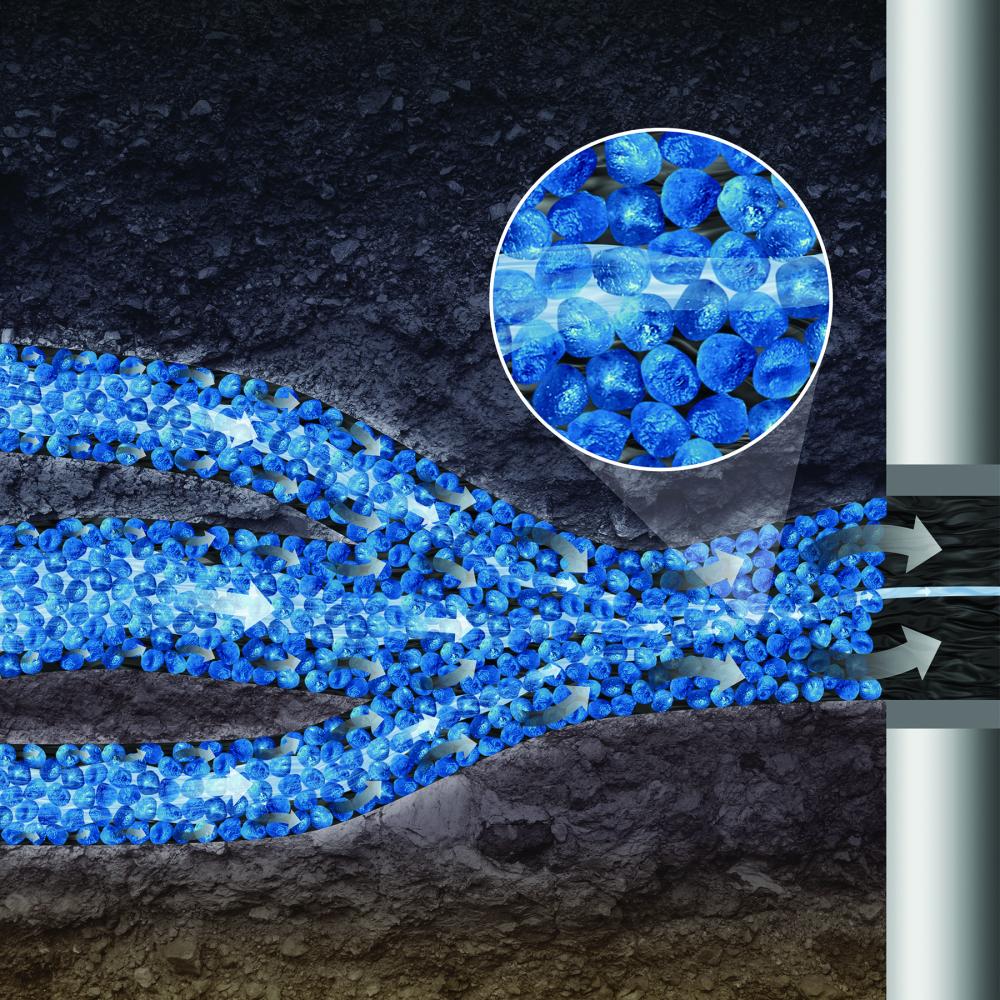 The AquaBond technology reduces formation water in the fractures before it reaches the surface. (Source: Hexion)

Produced or formation water is by far the largest byproduct of the oil and gas industry. Estimates show that for every barrel of oil recovered, 4 bbl to 10 bbl of formation water also are produced.

Formation water often contains salts, bacteria, organic chemicals and other contaminants. This can make the handling of formation water problematic. Most formation water is disposed of by injecting it into subterranean wastewater disposal wells; however, the added cost of hauling the water can severely impact well economics. Some companies treat the water for reuse in hydraulic fracturing or agriculture. Likewise, water treatment for reuse is not always an economical option.

The storage, transport, treatment and disposal of wastewater accounts for 89% of water management costs. The U.S. upstream industry was estimated to spend $34.7 billion on water management in 2018. Over the life of an individual well, produced water costs can total as much as $6 million. This represents nearly half of a well’s operating expenses, and these costs are predicted to increase.

Restrictions
Many states in the northeastern U.S. have tight restrictions on wastewater disposal, prompting higher associated transportation costs to neighboring, less-restrictive states for production water disposal. In Oklahoma additional restrictions have been placed on disposal wells due to water reinjection and seismic activity correlation. These restrictions limit the rate at which water can be reinjected and, consequently, increase costs associated with water management.

While efforts to manage fracturing flowback and produced water continue, little attention has been focused on limiting water production by addressing the issue downhole. Current technologies, such as gels or swelling chemicals, can limit formation water production, but they also restrict hydrocarbon flow.

Hexion developed the AquaBond formation water reduction technology, which has reduced produced water by as much as 50% without hindering oil and gas production. The technology is bonded to the proppant, making its water-reduction properties effective for the life of the well. With the application of this technology, the costs associated with wastewater management can be reduced, leading to a lower cost per barrel of oil equivalent.

How it works
This advanced technology alters the relative permeability of the proppant pack to admit hydrocarbons and reduce the admission of water. Proppant coating functional group modification results in a tailored critical surface tension that is hydrophobic as well as oleophilic. This creates an impelling force that admits oil while restricting water flow through the proppant pack.

A test apparatus was developed by Hexion to demonstrate the technology’s preference for flowing hydrocarbon over water. The testing device consists of a bonded proppant core, attached to a tight-fitting rubber cap, encased in a reservoir cell. The rubber cap is affixed to a tube that extends from the reservoir cell and empties into a graduated cylinder. The reservoir cell is filled with oil and water, submerging the core. A vacuum pump pulls the fluid from the reservoir cell through the proppant core. The fluid is collected in the graduated cylinder, and the water-oil ratio (WOR) that has moved through the core is documented.

The proppant pack is a porous medium, allowing water to flow through the pack when oil is not present. This prevents water blockage in the pack or at the formation surface/proppant pack interface. A 5-to-1 WOR was added to the test apparatus to demonstrate this. Only water was in contact with the proppant pack at the onset of the test. Once the test began, water flowed through the core until oil made contact with the core. Upon contact, oil preferentially flowed, leaving remaining water behind in the reservoir cell. When tested, traditional resin-coated proppant continued to flow water after oil contacted the proppant core, resulting in most of the oil being left behind in the reservoir cell.

Case study
A trial was conducted in the Granite Wash Formation in the Texas Panhandle to prove the effectiveness of AquaBond technology in the field. A 23% tail-in of AquaBond technology on 40/70 substrate was utilized on two horizontal wells. These wells were compared with 11 nearby offset horizontal wells. Three of the offset wells used a 23% tail-in of 40/70 traditional resin-coated proppant, and eight wells used 100% uncoated frac sand.

Each well had a true vertical depth of about 11,000 ft, with a lateral length of 4,000 ft, bottomhole static temperature of 180 F, and a total proppant volume of approximately 2.3 MMlb per well.

Traditional proppant and the uncoated frac sand offsets performed similarly over the trial period.  Comparatively, AquaBond technology wells had a 30% lower water cut and a 43% reduction in average cumulative water production, with no observed impact to total fluid production.

Using the technology
Lead-ins, tail-ins or total proppant designs can be utilized, depending on formation characteristics, desired water reduction and water issue severity. The technology also can be used as a remedial treatment for existing high-water-cut wells.

This has been demonstrated in laboratory tests using an array of samples in varying WORs from numerous regions throughout North America. The Granite Wash case study demonstrates how this technology can reduce the production of formation water without impacting total fluid production. The technology has been further proven in the Permian Basin, Bakken Shale and Haynesville Shale.