Schlumberger has released its GyroSphere microelectromechanical system (MEMS) gyro-while-drilling service for a faster and more rugged gyro-surveying-while-drilling tool that increases drilling efficiency and reliability while reducing drilling risks, according to a product announcement. As the first application of MEMS technology for gyro surveying while drilling in the oil field, the GyroSphere sensor performs gyro surveys faster than conventional systems and avoids the need for recalibration between runs. Solid-state technology enables the sensor to withstand the downhole shock and vibration that occurs during drilling beyond the limits of current gyro technologies. Additionally, the GyroSphere service can reduce gyro-survey uncertainty by up to 45%, providing more accurate access to smaller reservoir targets. The GyroSphere service has been proven through extensive testing and field trials in the North Sea, Ecuador, Africa and Russia. In Russia the GyroSphere service enabled a customer to avoid wellbore collisions while accessing reservoirs from existing structures, eliminating drilling risks associated with deploying conventional gyro surveys. slb.com/gyrosphere

Halliburton has released its Prodigi AB Service, a first-ofits- kind offering that introduces automation to hydraulic fracturing, according to a company press release. By automating the breakdown process of a fracturing treatment, the service helps deliver better well performance. The service uses algorithmic controls and is supported by a Halliburton completion adviser who will tune the system to optimize the performance. Prodigi AB Service is designed to help improve overall efficiency, maximize the performance of perforation clusters and mitigate the risk of screenout. The service provides consistent design execution, better distribution of fluid across the perforated interval and improved treatment pressures and rates. The service delivers improved precision to achieve a lower cost per barrel of oil equivalent. Halliburton has used Prodigi AB Service in the Permian Basin with outstanding results for Primexx Energy Partners. The service reduced overall treating pressures, increased consistency of the formation breakdown process and resulted in an immediate improvement in cluster efficiency. halliburton.com

Varel International Energy Services’ DrillPerf is a software program that provides real-time decision support using only surface data, which are retrieved from a well information transfer standard makeup language server, according to a company product announcement. The software can be deployed in several configurations to support decision-making on site and off site so users can view the output. Decisions are supported through analyzing real-time data streams of parameters measured only on the surface. The algorithm packaged into Drill- Perf combines several years of scientific research and field-proven models on drilling dynamics, drillbit behavior and drilling performance assessment in various drilling environments. When the software is calibrated at the rig using local data of current drilling practices and with basic drillbit attributes, such as bit size, cutter size, blade count and average rake angle, DrillPerf can be started and run with input from rig sensors to detect drilling dysfunctions. Comparative studies showed a great accuracy between downhole measurement using MWD/ LWD data and drilling dysfunctions detected with the software using exclusively surface data. vareloilandgas.com 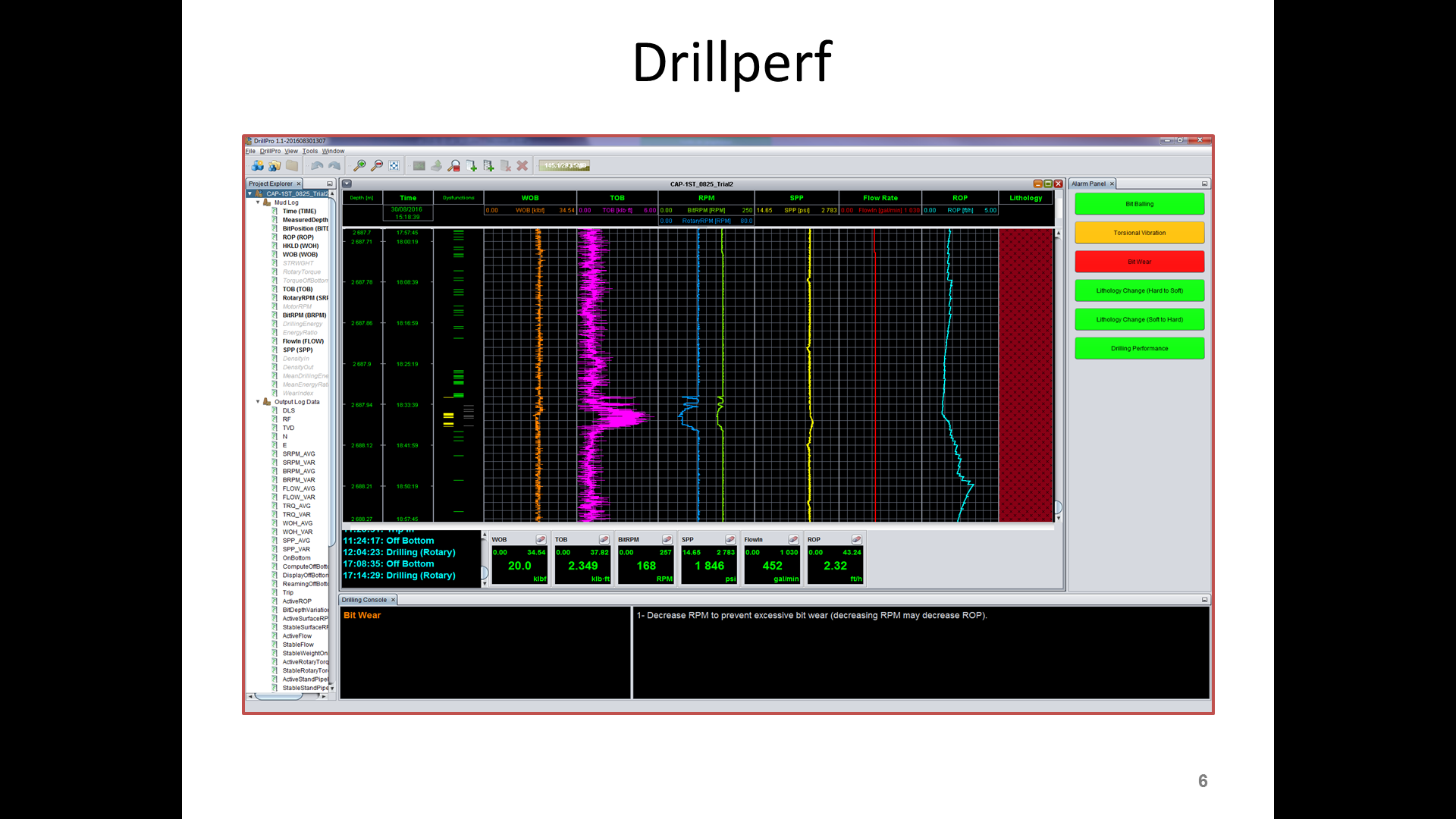 Strainstall has partnered with Baker Hughes, a GE company (BHGE), to pioneer the development of a wireless monitoring solution now open to almost all upstream wellsite operations, helping to improve safety, reduce costs and drive efficiencies, a press release stated. BHGE originally requested Strainstall to develop a wireless line tension monitoring. Strainstall’s approach was to engineer a plug-and-play system that required no changes to existing sheave arrangements by integrating its highly accurate tension load cells with its hazardous area certified wireless technology to provide both real-time and built-in data logging capabilities for line tension monitoring. This work led to Strainstall’s development of a modular, fully hazardous area certified wireless system that could integrate with any type of third-party sensor for any application where operator safety is a key concern, without needing International Electrotechnical Commission Explosive recertification. Strainstall has released its suite of Wellsite Monitoring Solutions, which address wellsite safety and efficiency issues, initially focusing on wireline, slickline and MWD activities. The wireless technology supports wellsite operations by eliminating the use of cabled sensors and removing trip hazards. strainstall.com/wms 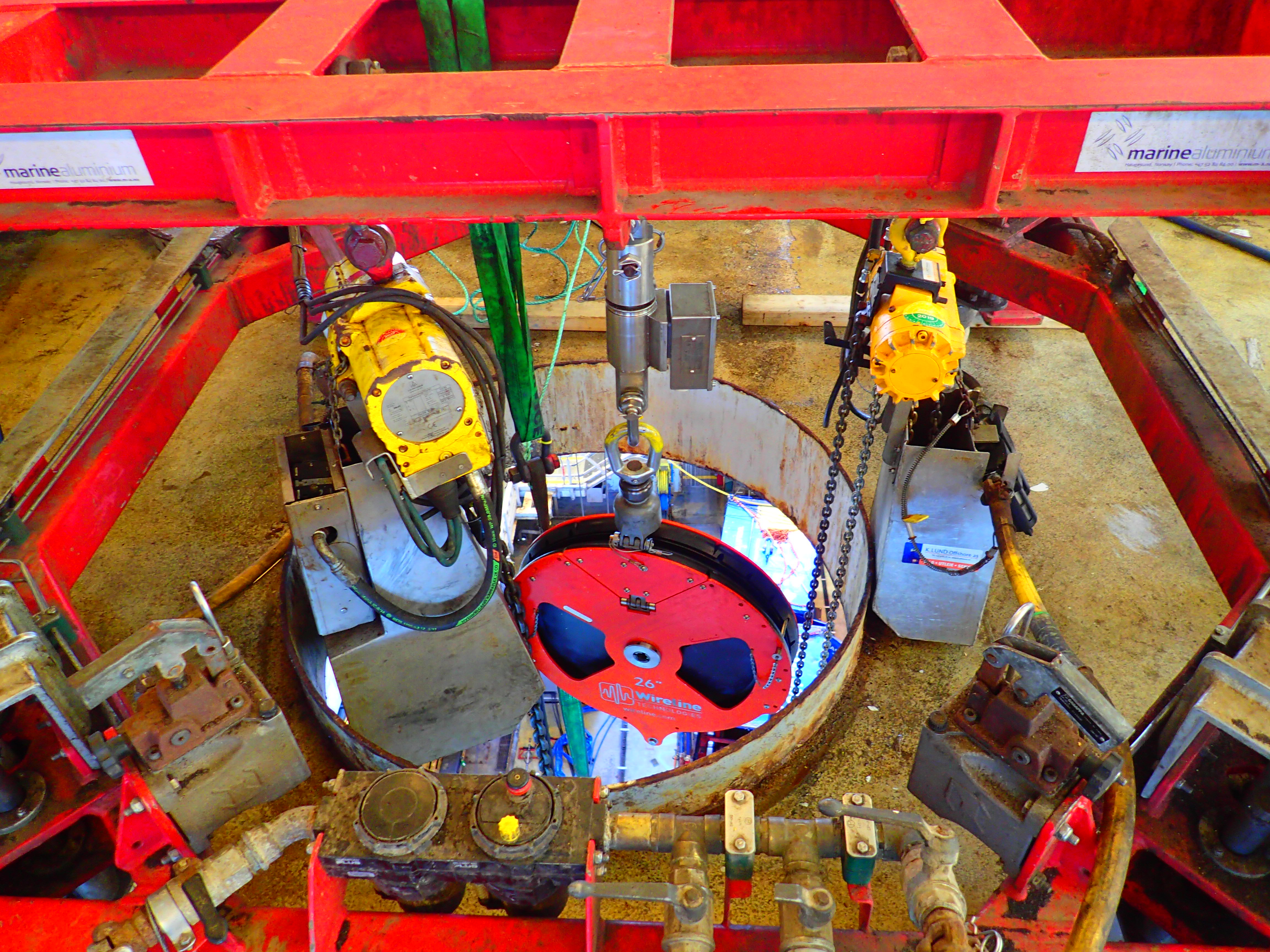 Device can detect up to seven gases

Dräger has released its X-am 8000 multigas detector, which can simultaneously detect up to seven gases including flammable gases, vapors and oxygen, a press release stated. The X-am 8000 is a smaller, lighter device with an easy-to-read color screen, and it has a compact product design that can be used with just one hand. In addition, the mobile device can easily be converted to a fully functional area-monitoring device. The detector’s practical functionality allows users to switch between pump and diffusion mode, saving energy and increasing the operating time of the device without requiring factory modification. draeger.com

Locus Bio-Energy Solutions’ AssurEOR FLOW is a new nontoxic, customized approach to paraffin dispersal for cleaning flowlines and rods. AssurEOR FLOW is an environmentally safe biochemical treatment and is the first paraffin dispersal product that is tailored to the specific characteristics of individual wells and increases production, according to a press release. This approach has been uniformly successful, with results leading to increased demand and swift expansion from the Appalachian and Permian basins into the Powder River Basin. locusbioenergy.com

Cleansorb, a provider of chemical well treatments that enhance hydrocarbon production, announced that it has increased oil production by up to 250% from mature vertical wells in Canada by treating them with its DEEPA formulation. DEEPA increases the matrix permeability of the rock and simultaneously remediates nearby wellbore damage, according to a company press release. These mature vertical wells, which have been producing for nearly 40 years, are located in the carbonate Swan Hills Formation in Canada and have a slight tendency to accumulate scale near the wellbore. The treatment, which delivers organic acid deep into the rock matrix via in situ acid generation, increases permeability uniformly around the wellbore. The Swan Hills Formation wells were treated with a custom DEEPA formulation suitable for a bottomhole static temperature ranging from 90 C to 110 C (194 F to 230 F). Following a brief 24-hour shut-in period to allow the treatment to dissolve the scale and penetrate the rock, production in each well rose by 200% to 250% and remained at those levels. Since the initial wells were treated in the carbonate Swan Hills Formation, similar results were achieved when applied to mature wells located in sandstone formations containing 5% to 10% carbonate. Approximately 30 mature wells in Canada have been successfully treated with DEEPA. cleansorb.com 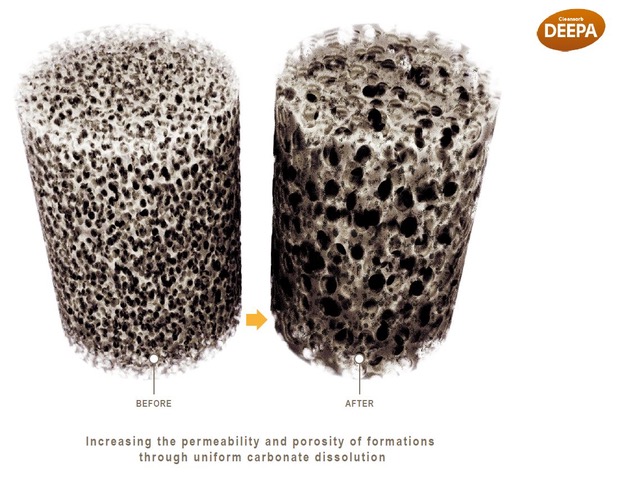 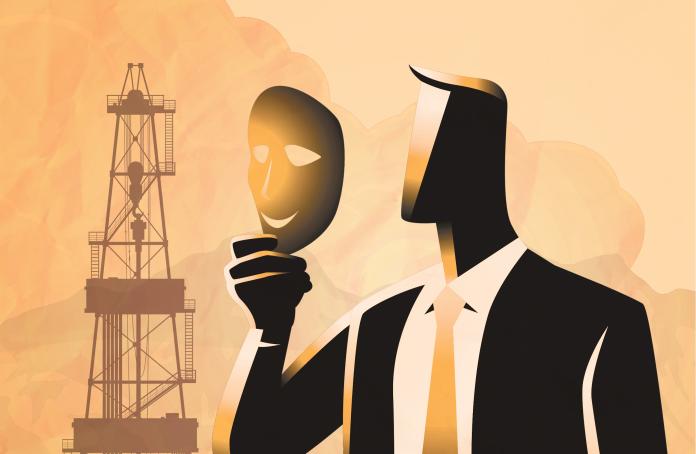