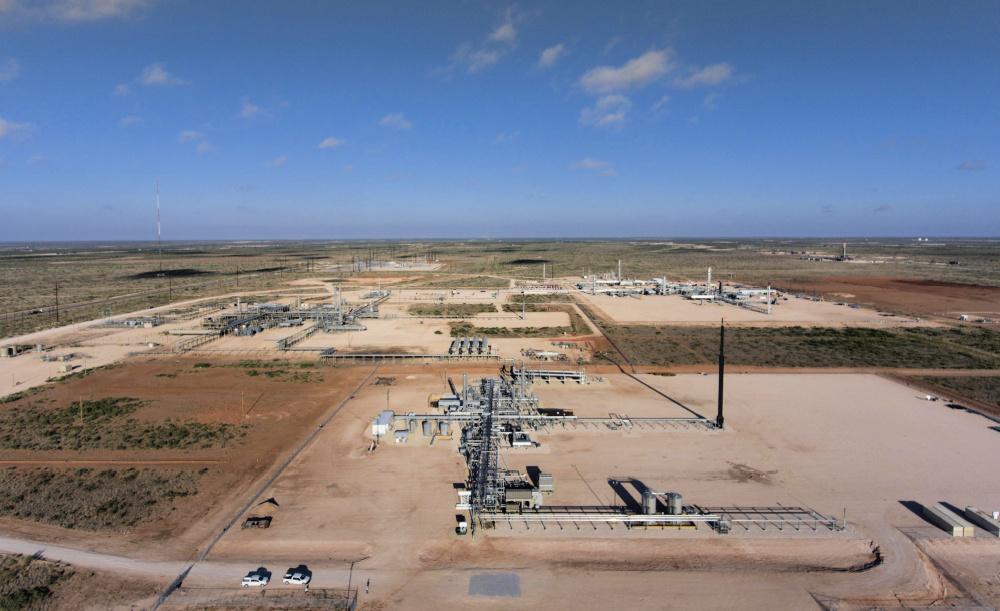 Lucid Energy Group is the largest privately held natural gas processor in the Permian Basin, providing the full range of gas midstream services to more than 50 customers in New Mexico and West Texas, according to the Targa release. (Source: Lucid Energy)

The $3.55 billion cash transaction, which will increase Targa size and scale in the Delaware Basin, follows the company’s recent “bolt-on” acquisition of Southcross Energy in the Eagle Ford for $200 million. Targa said it has available liquidity, including cash on hand, its existing $2.75 billion revolving credit facility, and committed debt financing to fund the Lucid acquisition.

“The strength of Targa’s standalone financial position has afforded us the flexibility to consider attractive opportunities to grow our business through acquisitions, as evidenced by our ability to finance the purchase of Lucid utilizing available cash and debt with estimated pro forma year-end 2022 leverage around 3.5 times, well within our long-term leverage ratio target range,” Targa CEO Matt Meloy commented in a company release.

“We congratulate Mike Latchem and the entire Lucid team on today’s milestone,” Baran Tekkora, a partner at Riverstone and co-head of private equity, said in the Targa release. “The transaction with Targa will position Lucid for its next stage of growth, while creating enhanced opportunities for its employees, customers and communities.”

Riverstone and Goldman Sachs had acquired Lucid Energy in 2018 from Lucid Energy Group I LLC, which later changed its name to Cogent Midstream, for roughly $1.6 billion cash. Cogent has since been acquired by Canes Midstream LLC.

“We are pleased to have partnered with Lucid and Riverstone over the last several years, as the company has continued its growth as a leading gas gathering and processing platform in the Delaware Basin,” added Scott Lebovitz, partner and co-head of the infrastructure investing business within Goldman Sachs Asset Management.

As part of the transaction in 2018, Lucid I and its financial sponsor, EnCap Flatrock Midstream, agreed to sell its Delaware Basin subsidiary, Lucid Energy Group II LLC to a joint venture controlled by Riverstone and Goldman Sachs. The transaction, which closed first-quarter 2018, included committed debt financing provided by Jefferies LLC.

Following close of the transaction, Lucid II retained the name Lucid Energy and operated as a Riverstone and Goldman Sachs portfolio company. Its assets were located in the core of the northern Delaware Basin and are known as the South Carlsbad Natural Gas Gathering and Processing System and the Artesia Natural Gas Gathering and Processing System.

On June 16, Targa said the acquisition of Lucid will add approximately 1,050 miles of natural gas pipelines and approximately 1.4 Bcf/d of cryogenic natural gas processing capacity in service or under construction located primarily in Eddy and Lea counties of New Mexico. Approximately 70% of current system volumes are sourced from investment-grade producers.

“Lucid’s management team has developed an attractive position in the Delaware Basin and we look forward to continuing to provide value-added services to the producer customers,” Meloy said in the company release.

“This is an exciting acquisition,” he continued, “that aligns with our integrated strategy as we are expanding and diversifying our Permian Basin footprint with Lucid’s complementary presence at an attractive investment multiple that we expect will further enhance the creation of shareholder value and continue to drive more volumes through Targa’s downstream businesses.”

Lucid’s Delaware Basin footprint overlays some of the most economic crude oil and natural gas producing acreage in North America, according to the company release. Targa noted that current rig activity supports over 20 years of drilling inventory on Lucid’s greater than 600,000 dedicated acres, which are further supplemented by significant volumes subject to minimum volume commitments.

“Over the past several years, Lucid has firmly established itself as a leading midstream processor in the Delaware Basin, with a talented team, sophisticated operations and infrastructure, and strong customer partnerships,” commented Lucid Energy CEO Mike Latchem in the release. “I am immensely proud of what we have achieved, as today’s transaction is a testament to the commitment and expertise of our team members and our strategy of growing the business for the benefit of all stakeholders.”

“The acquisition is expected to be immediately accretive to distributable cash flow per share. This acquisition further supports our already strong cash flow profile and ability to return an increasing amount of capital to our shareholders through common dividend increases and common share repurchases,” Meloy added.

The Lucid acquisition is expected to close in the third quarter. Completion of the transaction is subject to customary closing conditions, including regulatory approvals.