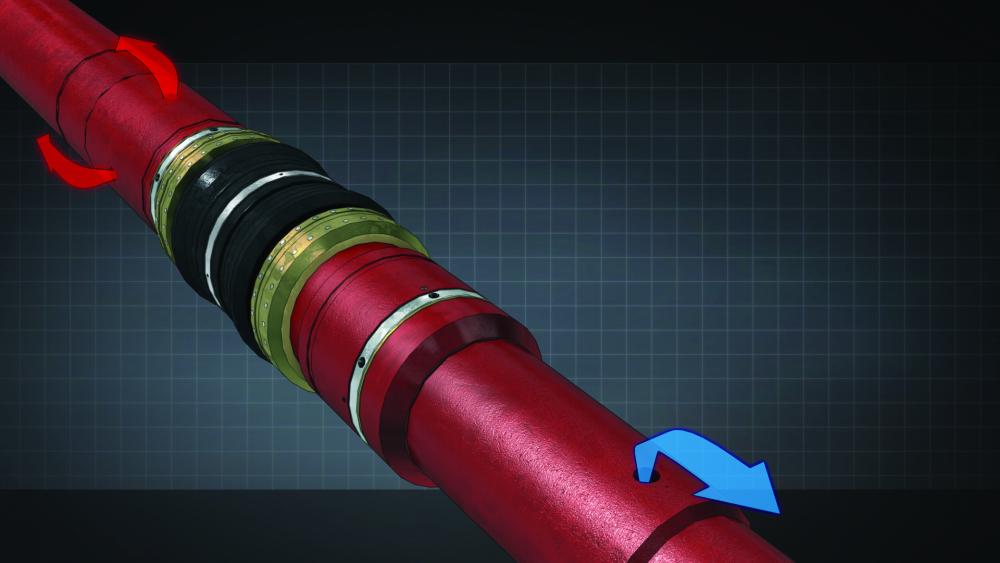 The CrossStream crossover tool enables liner rotation and reciprocation during reverse-cement placement, which enhances the quality of the cement job. (Source: Weatherford)

The unique and complex characteristics of deepwater formations have been strong drivers for technological innovation, as operators and service companies alike expand their capabilities to meet the demands of this high-stakes arena.

One of the most critical aspects of well development, cementing is especially challenging in deepwater environments with depleted formations, weak or lost-circulation zones, and narrow pore pressure/fracture gradients. These conditions influence the window of acceptable equivalent circulating density (ECD) downhole necessary for successful cementing operations.

Traditionally, cement is pumped down the drillpipe, liner or casing inside diameter (ID) and pushed up the annulus. The resulting lift pressure, combined with very tight annular restrictions that sometimes occur at the previous casing shoe, creates high ECD on the bottomhole formation, increasing the risk of losses to the formation during cement placement.

Bottomhole ECD and lost-circulation risk can be reduced using a reverse-cementing technique whereby cement is circulated down the annulus and back up through the casing or liner ID.

Bottomhole ECD and lost-circulation risk can be reduced using a reverse-cementing technique whereby cement is circulated down the annulus and back up through the casing or liner ID. While the approach is effective, primary cementing applications have been limited to land and shallow-water wells where there is no marine riser and the annulus extends directly to the surface.

Considering the efficiency and ECD benefits offered by reverse cementing, there was a clear value to expanding the applications of this technique. Weatherford took a systems approach to bringing reverse cementing to deepwater basins. The company developed a multitool linercementing system that uses radio-frequency identification (RFID) technology to facilitate a flow path that diverts cement in the annulus below the riser and BOP stack.

The CrossStream subsurface reverse-cementing system is engineered to run above a liner hanger and to selectively place fluid when and where it is needed. Because cement cannot be pumped down the annulus directly from the rig floor in deep water, cement is first pumped down the drillpipe conventionally and then diverted to the annulus above the liner by a tool in the CrossStream system. From there it continues down to the liner shoe. Return fluid flows up the liner casing ID and crosses back through the CrossStream tool into the annulus above the liner before returning to the surface.

In cases where losses have occurred far down in the wellbore, the subsurface reverse-cementing system mitigates the potential of cement losses into the formation. The system also lowers bottomhole ECD, thereby reducing the risk of fluid losses and expensive remediation due to inadequate cement coverage across weak or depleted zones.

RFID technology enables the activation of multiple tool functions without the limitations of a mechanically manipulated system. In the case of the CrossStream system, RFID tags command tools to selectively switch between conventional and reverse-circulation flow paths multiple times on demand in a single trip. For example, the liner can be run in-hole with the CrossStream system set up to allow conventional circulation. Prior to the reverse cementing job, an RFID tag would be pumped downhole to switch the CrossStream system to the subsurface reverse circulation flow path. Alternatively, the tools can be cycled using a sequence of pressure pulses.

A key aspect of the system is its ability to continuously rotate and reciprocate the liner during cementing, further enhancing hole-cleaning efficiencies and set-cement integrity. Depending on well geometry, the system also can reduce the operational time required for cementing. Because reverse-cement placement stops once cement has filled the annulus and shoe track, pumping the volume inside the liner for displacement is not necessary.

Engineered in a modular design for versatility, the subsurface reverse-cementing system includes an RFID-activated crossover tool, which is required for any subsurface reverse-cementing operation, and two auxiliary RFID-actuated tools that can be deployed depending on job requirements. An RFID circulation tool enables selective, continuous circulation into the work string annulus without flowing fluid past the depleted zone or displacing cement. An RFID flapper valve isolates the running string when setting an expandable liner hanger after cement placement. In addition to the RFID components, a bi-directional float collar allows flow in conventional circulation and reverse circulation directions.

To validate the performance of the crossover tool and bi-directional float collar in field conditions, a major operator applied the subsurface reverse-cementing approach to install a liner in a land well in Pennsylvania in July 2015. The selected well accommodated a casing design with a liner string inside a surface string, with the geometries of the parent casing and liner string similar to the design of an offshore well candidate in terms of the annular clearance. This geometry maintained a tight annular clearance between the casing ID and liner outer diameter as typically seen in deepwater wells.

The crew ran the crossover tool downhole in the reverse position, after which cement was placed in the annulus to cement the liner in reverse with rotation. A field technician then released an RFID tag at the start of displacement that, upon arrival downhole, signaled the crossover tool to shift from the reverse flow path to the conventional flow path. After the tags passed the tool, the well was shut in so that casing and tubing pressure could be monitored. Pressures equalized after five minutes, indicating the tools were functioning as planned. The liner hanger was then successfully set by traditional methods.

In place of conventional float equipment, which is typically located in the shoe for standard cementing operations and allows flow in only one direction, the crew ran a bi-directional float collar near the top of the liner hanger. Based on existing float-collar technology, the bi-directional float collar was designed with three flapper valves—two downward- facing flappers to hold back pressure after the cement job and a top, upward-facing flapper valve that facilitates circulation while tripping out of the hole without disturbing the cement. Because the flappers face in opposite directions, the float collar provides a seal above and below the cement. A stinger is attached to the liner running string that holds the flappers open during the cementing operation.

After the cement had set, the operator ran cement bond logs and ultrasonic logs to evaluate cement coverage and integrity. The team also deployed a cold tracer to enhance cement detection based on the reduced thickness of the cement sheath. The logging results indicated a good-quality cement bond throughout the openhole section. The quality of the cement shown by the bond log also validated the subsurface reverse-cementing approach.

As part of the development process, the CrossStream subsurface reverse-circulation system is being validated in stages to test this new technology. Large-scale testing and land trials have been completed, with offshore trials planned for the future. The successful land trial provided valuable knowledge and is a major milestone toward transitioning this technology for routine offshore use, including deepwater formations where the risk of depleted or weak formations and subsequent cement losses are problematic.