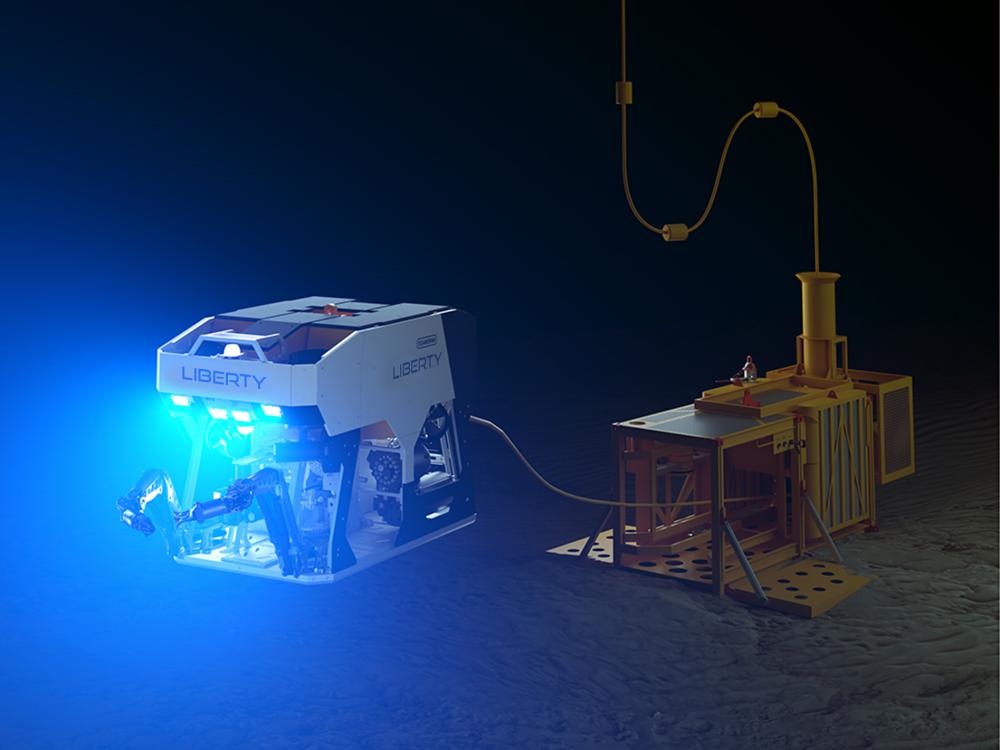 The Liberty E-ROV is an all-in-one deployable and recoverable system with a cage-mounted battery pack, tether management system and communications buoy. (Source: Oceaneering)

The industry has been calling for more innovative solutions for subsea work scopes to help reduce or eliminate carbon footprints and increase worker safety on and offshore. Remote operations coupled with advanced autonomous solutions can have a significant impact on how business is conducted, even when that business is taking place offshore, with unpredictable weather windows and harsh currents.

Advanced subsea autonomy, coupled with remote operations technology and reliable offshore satellite and cellular communications, have brought subsea resident vehicle systems closer to reality. These vehicles can stay subsea for longer with increased battery life and without the need for a support vessel. Oceaneering has worked to advance these underwater robots and recently deployed its Liberty E-ROV (Empowered ROV) for a major North Sea operator.

Oceaneering’s subsea resident vehicle, the Liberty E-ROV, is a self-contained, battery-powered, work class vehicle that can carry out inspection, maintenance and repair (IMR), commissioning, and underwater intervention activities. It is an all-in-one deployable and recoverable system. It has a cage-mounted battery pack and tether management system as well as a communications buoy, which hosts an antenna mast to improve signal reception and battery power to support communications transfer.

Boosting power subsea
The battery packs are housed in Liberty E-ROV’s garage rather than the vehicle body to lower its weight and increase maneuverability. There are six battery pods on two sides of the garage, 12 in total, which provide 500-kWh power. The power is distributed through a control system housed next to one of the cylinder arrays. Other power options have been considered, including fuel cells within the garage or on a skid nearby. However, these may be suitable for longer-term installations but are unnecessary for normal E-ROV deployments. Both the cage and Liberty E-ROV are optimized to handle peak power consumption. While the Liberty E-ROV is battery-operated, it could be connected to a subsea power source to have an unlimited duration. Subsea residency, via current battery life, is designed for two to three months, but work to extend this is ongoing. Oceaneering is simultaneously working on another subsea resident vehicle called Freedom ROV, which could stay subsea for up to six months at a time.

The Liberty E-ROV system was modeled after Oceaneering’s eNovus ROV, which uses an electric propulsion system with electric controls and intelligent diagnostics. Liberty E-ROV uses a hydraulic power pack to support  ts manipulator functions. Currently, no electric manipulators are available that provide the lifting capacity of traditional hydraulic arms. The goal is to one day achieve a fully 100% electric E-ROV system.

Remote control
The Liberty E-ROV system can be controlled from Oceaneering’s onshore remote operations centers with communication provided via high-bandwidth low-latency 4G LTE and satellite communication from the buoy. The combination of these technologies makes the system a very cost-effective subsea tool. The Liberty E-ROV can be placed subsea by a vessel of opportunity equipped with a subsea crane. Recovering the system, including the recharging of a fully depleted battery, can be done in 12 hours or less. By removing dedicated support vessels, operators can simplify logistics and, most importantly, reduce their carbon emissions output by an estimated 90%.

Case study
In late 2019, a major operator was completing well workover activities on a template offshore Norway using a semisubmersible drilling rig. The operations included pulling a high-pressure cap, and there was potential for the release of pressure and a subsequent gas leak. To mitigate this risk, an additional safety barrier and intervention method was required. The intervention would require the opening of a flapper valve located 16 km away. By opening the flapper valve, the pressure on the gas line could be bled down safely.

The location of the flapper valve and its distance from the rig put it out of reach of the ROV mobilized on the rig and dictated the requirement for an additional ROV. There was, however, uncertainty around the exact timing of the removal of the high-pressure cap. This scheduling unknown meant the added requirement for a second ROV and its associated vessel could potentially be very costly. To meet the on-call requirements in the event of a pressure release or failed seal post pressure cap pull, an ROV was required to be on site at the flapper location.

Oceaneering identified its Liberty E-ROV system for the work scope. Once the Liberty E-ROV garage is deployed to the seabed, the electric ROV can perform work class ROV tasks within a 1,000-m working radius of the garage location. By eliminating the requirement for a surface vessel and mobilization of personnel offshore, the operational costs were projected to be a fraction of that of a conventional ROV supported by a vessel topside.

The client’s IMR vessel collected the Liberty E-ROV system from its offshore location where it had completed a periodic inspection work scope. It was then transported and deployed at the flapper valve location prior to the high-pressure cap being pulled. With the relative low costs associated with the Liberty E-ROV operations, this could be done at a convenient time in the IMR vessel’s busy work program.

Once subsea and on location, the ROV docked onto the flapper valve using its electric class-4 torque tool, ready to turn the valve if it is needed. The Liberty E-ROV system was crewed 24/7 by onshore personnel located at Oceaneering’s onshore remote operations center in Stavanger.

The drilling rig was delayed in completing the critical high-pressure cap-pulling operations. Because the operator had deployed the Liberty E-ROV and did not require the support of a surface vessel to maintain the safety barrier, this delay had minimal cost implications.

The Liberty E-ROV system was deployed for two weeks, during which a support vessel was only required for launch and recovery operations, freeing the vessel to complete other pressing operational needs. The use of the system rather than a conventional vessel-supported ROV system is estimated to have saved the client seven days of IMR vessel time, equating to a cost savings in the range of $1 million. The operation went to plan, and the flapper valve never needed to be opened.

This use case for the Liberty E-ROV was a significant milestone, proving the system potential for tremendous cost savings when used for single operations that traditionally require a support vessel for the ROV.