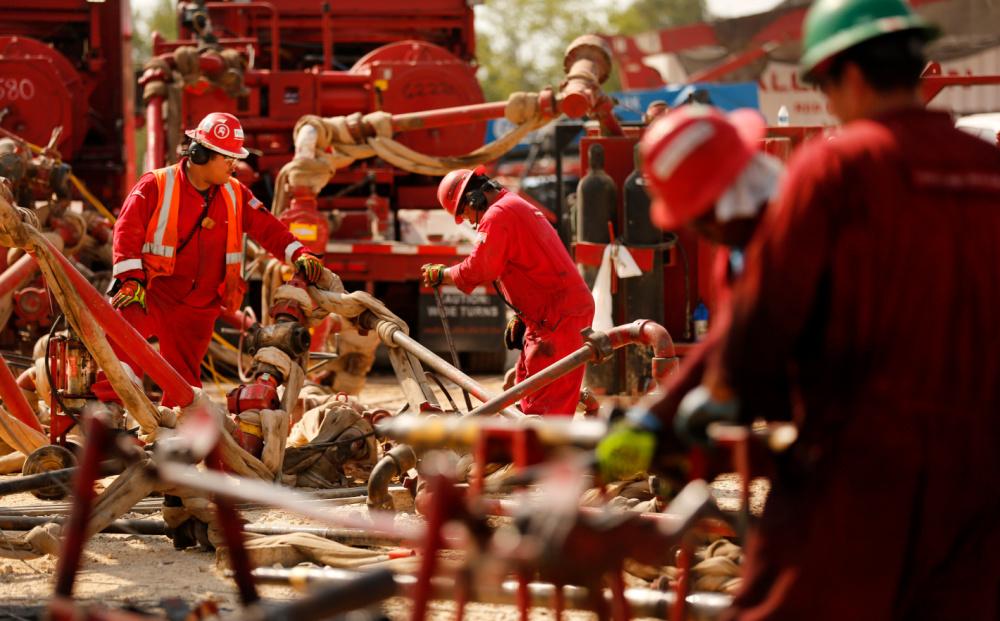 “At $100 a barrel, everything is busy,” Jeff Miller, CEO of Halliburton, told analysts in a call this week. (Source: Hart Energy)

The oil drilling boom is on.

That’s the message this week from Halliburton Co. and Baker Hughes Co., two of the world’s top oilfield services groups, which carry out the frontline work for oil and gas producers such as drilling and fracking new wells.

“At $100 a barrel, everything is busy,” Jeff Miller, CEO of Halliburton, told analysts in a call this week. “Current oil supply tightness and commodity price levels strengthen my confidence in the accelerating multiyear upcycle and very busy years ahead.”

Oil prices have surged to more than $100/bbl after Russia’s invasion of Ukraine compounded concerns over global crude supplies, which were already tight as the global economy emerged from the pandemic.

The high prices have helped fuel a rise in oil drilling activity, especially in the U.S.

The number of rigs drilling for oil in the U.S. has risen to 548, up about 60% over the past year. And as Financial Times reported last week, drillers in the Permian Basin, America’s largest oil field, secured more new well permits in March than any month ever, another sign of the big pick up in oilfield activity.

Post-pandemic Pushback: Permits Rally a Prelude to Pop in Oil and Gas Production

Investor demands that the price windfall go to higher dividends and share buybacks has tempered growth at some bigger publicly listed producers, but privately held drillers that are trying to maximize cash flow by adding new wells at high prices are accelerating drilling.

“Over 60% of the U.S. land rig count sits with private companies and they keep growing, while public [exploration and production firms] remain committed to their activity plans,” said Miller, referring to E&P firms.

However, the expansion is running up against a wall of inflation and tight supplies for everything from rigs to steel, sand, speciality chemicals and fluids used in the oil patch.

Baker Hughes CEO Lorenzo Simonelli called it the “most challenging supply chain and inflationary environment we have seen in several decades.”

Miller said Halliburton’s “hydraulic fracturing fleet remains sold out and the overall market appears all but sold out for the second half of the year.” He also warned tight supplies of labor and equipment would be a “constraint” on U.S. growth in the coming years.

The tightness is fueling inflation, which will ultimately push up the cost to produce oil and support higher prices. Breakeven prices in big American oil fields, currently in the range of $40/bbl to $60/bbl, could quickly rise if inflation is sustained, increasing the price needed to support U.S. output.

Halliburton’s Miller said he expected U.S. oil companies to spend 35% more this year than they did last year, up from an expectation earlier this year of a 25% increase, largely because of inflation.

There is a sense of “sticker shock” in the oil patch, Miller said.