In today’s low oil price environment, offshore operators, like their onshore counterparts, are looking to extend the profitable life of mature fields. Often, this requires drilling through salt, unstable coal and shale layers, tar zones, depleted zones, and formations with variable flows and pressures—and doing it safely, efficiently and economically.

For many years operators were forced to compromise ideal well placement to avoid these troublesome formations, leaving millions of barrels of oil in the ground. More recently, techniques such as managed pressure drilling (MPD), casing while drilling (CWD) and liner drilling presented alternatives to conventional techniques to enable drilling through problematic zones to reach reservoirs that previously had been considered unreachable and economically unviable.

MPD accurately controls bottomhole pressure using a combination of mud density, equivalent circulating density and backpressure. However, it requires new tools, specialist expertise and what can amount to significant upfront and operating costs. Trip times with MPD tend to be long because of the need for tight mud weight tolerances and the associated need to trip slowly to minimize swab and surge pressures to avoid damaging the formation.

Additionally, reamer runs and wiper trips often are needed, as in conventional drilling, after reaching total depth (TD). CWD and liner drilling can offer a less expensive alternative to MPD. However, CWD requires some rig modifications, and nonsteerable liner drilling does not allow LWD or MWD, prohibiting drilling of 3-D well profiles.

Developed to address borehole collapse, low-pressure zones, formations with variable flows and pressure regimes, and completion through trouble zones, the SDL makes it possible to drill, evaluate and place a liner to TD in a single run in 3-D well profiles.

Nonproductive time (NPT) and openhole exposure are significantly reduced; wellbore integrity is ensured; and a clean, high-quality, completion-ready wellbore is constructed without the need for specialized rig equipment modifications or long reamer and wiper trips often associated with MPD and conventional operations.

A standard drillpipe is used as the inner string of the SDL to handle drilling torque and to trip the drilling bottomhole assembly (BHA). A closed-loop RSS with modular LWD and MWD tools is placed below the liner system. In addition to performance and wellbore stability advantages, the RSS capability enables accurate 3-D well placement.

By minimizing the annulus size compared to conventional drilling methods, the SDL system improves the compression of the cuttings into the wellbore and formation face, which significantly reduces fluid loss and cuttings volume and helps to mitigate formation damage in a process called the “smearing effect.” The smearing effect enhances the filter cake, increases wellbore stability and significantly reduces mud losses across the formation after drilling.

The liner is isolated from the reamer shoe and can be rotated from surface at a much lower rpm than the pilot and reamer bit. As a result, the load on the liner is reduced, and fatigue life is improved. Pipehandling and rigsite footprint are reduced because drilling with a liner rather than a long string of casing requires minimal rig modifications and no special rig equipment.

Two points of latching—one at the top and another at the bottom—create two connections between the liner and the pilot BHA, which reduce vibration levels and provide a more stable drilling system. Locating the drive, power and communication components inside the liner minimizes the BHA stickout—that is, the distance by which the BHA exceeds the bottom of the liner shoe—while maximizing the amount of formation covered by the liner during drilling.

Because the liner is included in the downhole assembly during drilling, the long trip times and extra runs associated with MPD are eliminated. These time savings are particularly valuable when drilling time-sensitive formations and when operating from rigs with high spread costs. The BHA configuration in the wellbore produces a less tortuous hole than nonsteerable methods or other RSS-enabled methods. Additionally, the shorter BHA stickout significantly reduces potential stuck pipe and other pipe/BHA sticking incidents.

Deepwater value
SDL technology can bring particular value to deepwater applications that limit or preclude CWD techniques. For these applications, the rig load capacity and/or wellhead might be insufficient to handle the potential weight of the casing string. Additionally, subsurface BOP modifications and time-consuming operations on the rig floor would be required to accommodate the constant rotation of the casing through the BOP stack.

During well control situations, the BOP must be able to shear the casing being used for drilling. On the other hand, SDL technology requires less rig load capacity, minimal rigup time and no BOP modifications. 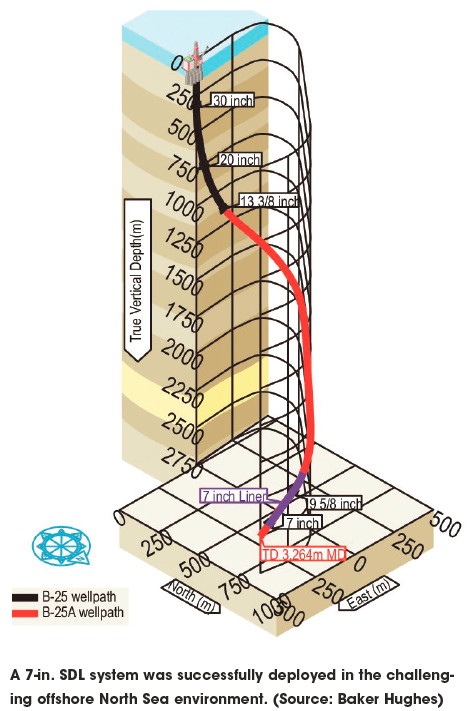 Field successes
Baker Hughes and Statoil collaborated to develop the first steerable liner system that has been commercialized in 7-in. and 9 5/8-in. sizes for 8½-in. and 12¼-in. hole sections, respectively, and have been successfully field-tested in several areas of the world.

One successful deployment in the North Sea was performed to isolate an unstable shale section that protruded into the reservoir.

In the past, the trouble zone had been bypassed by numerous sidetracks, which had led to suboptimal placement of the wellbore and had severely limited production. Prior to running the SDL system, extensive reservoir navigation technologies, including deep-reading resistivity and azimuthal gamma ray, were used to evaluate the shape and lengths of the shale interval.

After drilling directionally through the shale, the SDL system was deployed as an openhole patch solution. The required liner length and inner string of the SDL were assembled on the surface, and the system was lowered into the hole on standard drillpipe.

The upper and lower ends of the liner were released without any problems at TD. Subsequent drilling through the 6-in. hole confirmed that the liner had been placed where required. No problems were encountered during tripping, drilling the BHA or running production screens. The operation was completed in fewer than three days. It was estimated that 350,000 bbl of oil that otherwise would have remained trapped were recovered from the well.

SDL drilling has become a proven trouble-zone drilling solution from fixed offshore installations. More recently, it was applied successfully from a semisubmersible rig in the North Sea in rough weather conditions. 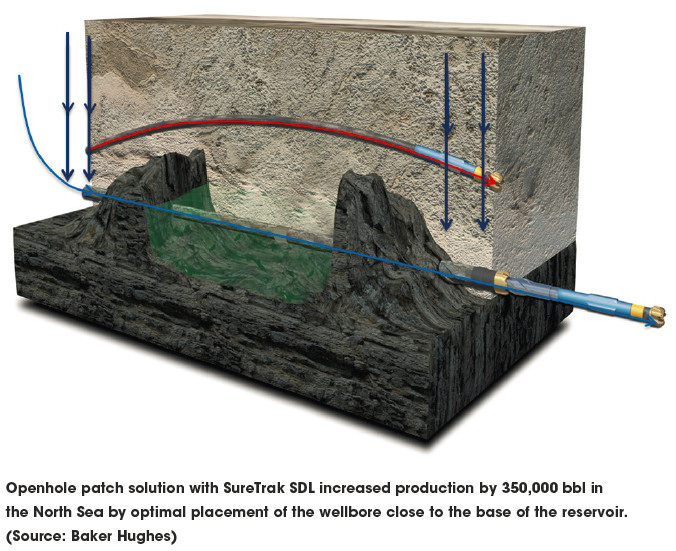 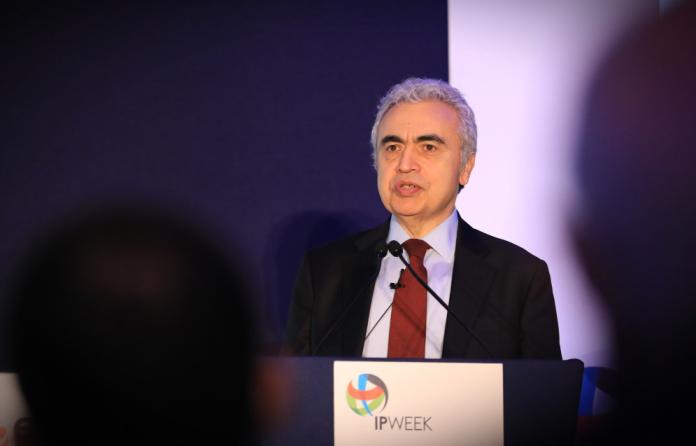 Discussions at this year’s IP Week, including from IEA’s Fatih Birol, illustrated the increasing sense of urgency among the oil and gas industry in addressing climate issues.

Cheniere: Canceled Cargoes Will Have Little Impact On LNG Production

It’s too early to gauge the impact of the coronavirus on the near-term market, say executives.

Venture Global LNG Inc. entered an agreement with France’s EDF to supply one million tonnes per annum from its Plaquemines LNG export facility in Louisiana.