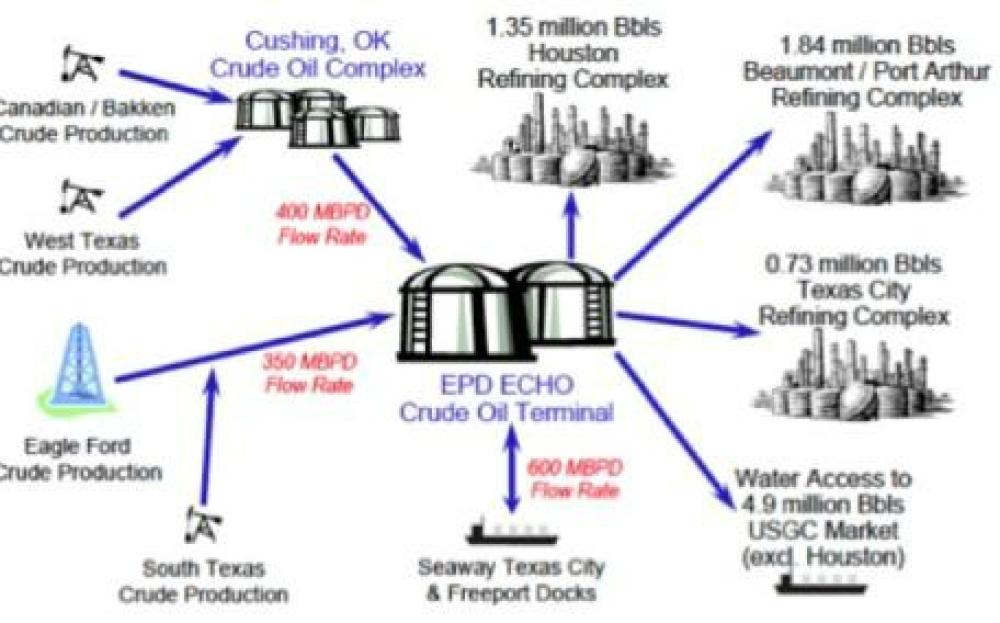 The unprecedented rise in domestic crude oil production has created tremendous change for the U.S. Gulf Coast refining market, including an advantageous position for some midstream logistics companies.

With U.S. domestic production at 7 million barrels (bbl.) per day, as well as increased Canadian production, there’s an increasing flood of inland crude creating a bottleneck at the Cushing, Oklahoma, trading hub that needs alleviation. Many in the industry anticipate a host of pipeline projects will bring more than 3 million bbl. per day from Cushing and South Texas to the Gulf Coast, helping relieve the crude oil stockpile.

But it is possible “the Cushing backlog will essentially just transfer to Houston,” Sandy Fielden, director of analytics at RBN Energy, tells Midstream Business.

“Some facilities are older, some are new. Some are in Houston and some are in Louisiana,” he says. “They are all trying to address the same issue. Someone is going to need to redistribute the incoming crude, and there is a lot of money to be made if they are in the right place.”

Aiming to capitalize on this expected demand, Enterprise Products Partners LP is in the midst of constructing the ECHO crude oil storage and terminal facility, located outside Houston in southeast Harris County, Texas. Of that expected 19 million bbl. of capacity, Enterprise estimates that the ECHO facility could have as much as 6 million bbl. of crude oil storage capacity when completed.

The terminal will be connected to both the Enterprise-owned Eagle Ford crude pipeline from South Texas and the Seaway line that runs between Cushing and Freeport, Texas, once the company completes an ECHO-to-Jones Creek, Texas, pipeline in the third quarter of 2013. Jones Creek, outside Freeport, is Seaway’s southern terminus.

Once completed, the ECHO terminal will offer access to major Texas Gulf Coast refining centers in Texas City, Pasadena/Deer Park, Baytown and along the Houston Ship Channel. ECHO will also be connected to the Enterprise marine terminal at Morgan’s Point on the ship channel.

“The neat thing about ECHO is it is a pipeline connected to every major refinery in the Houston, Beaumont, Port Arthur areas and the entire Gulf and East Coasts through waterborne,” A.J. “Jim” Teague, executive vice president and chief operating officer of Enterprise’s general partner, recently told the Houston Producers Forum.

Enterprise announced in November 2012 that the initial phase of the storage facility was complete and receiving deliveries of crude oil. The facility’s first three tanks have a total 750,000 bbl. of storage capacity. And, according to the company, the next expansion phase is expected to add as much as 900,000 bbl. of storage capacity, which could be in service as early as the first quarter of 2014. That could bring large potential benefits to both Enterprise and refiners, according to RBN’s Fielden.

“For Enterprise, the huge potential benefit from the ECHO terminal, which they have yet to realize, is they will be able to offer customers a throughput from Seaway to Houston and then once in Houston, they will be able to offer customers a redistribution point to refiners around the area or an access point to the Houston Ship Channel, for marine transport,” he says. “For refiners, storage facilities like ECHO offer a useful staging post to reliably provide a given amount of crude feedstock on a consistent basis.”

According to Fielden, in the recent past Gulf Coast refiners spent billions of dollars reconfiguring their refineries to “live on a diet of heavy sour crude.” The influx of competitively priced inland light crude is not really suitable for these refineries.

“You can run lighter crude, but it produces too much light distillate that overwhelms the refinery capacity forcing a reduced throughput,” he says. “One way for Houston refineries to consume more of the competitively priced light crude is to blend it with heavier grades. And one of the advantages of having access to storage terminals like ECHO is its blending capabilities.”

Due to the backlog experienced in Cushing, inland crude prices are depressed, with a price spread of as much as $20 between West Texas Intermediate (WTI) crude and North Sea Brent crude. Many in the market, Fielden says, once believed that ECHO, along with the Seaway and Keystone pipelines, would miraculously bring inland prices “back in line with Brent.” But, pricing predictions can be difficult and, Fielden explains, the old rule of thought is looking unlikely.

“The market, at the moment, is waiting with bated breath for new capacity to open up between Cushing and Houston to reduce the stockpile at Cushing, but so far it has been a bumpy ride,” he says. “There was a hiccup recently when Enterprise announced a constraint on the Seaway pipeline because the takeaway capacity at the Houston end is restricted until Enterprise completes the Jones Creek-to-ECHO pipeline.” According to analysts, recent developments have had an impact on the unpredictability of inland crude prices, which are set by the WTI-Cushing benchmark. There is no guarantee what potential effect the new terminal will have on pricing, according to Larry Schwartz, an independent energy and petrochemical consultant.

“Conceptually, if everything is just connected by pipeline, it should just be pipeline tariff as the differential plus maybe a little bit for handling,” he tells Midstream Business. “So what you have is WTI, which is stranded MidCon; Eagle Ford which is either a parity or above WTI, and they are competing and trying to get LLS [Louisiana Light Sweet] prices.”

Fielden emphasizes that transfer of Cushing’s congestion to the Houston-Gulf Coast region is a distinct possibility.

“All of this stuff is just going to come down the line and then back-up in Houston. Right now, Cushing has roughly 50 million bbl. stored,” he says. “ECHO has 6 million bbl., which will not be ready until the end of this year at the earliest. So with simple math, things are likely to get backed up in Houston.

“These places must have connectivity, as Enterprise has found out. If your terminal is not connected to anything, then it pretty quickly fills up.”

To alleviate these concerns, Enterprise is working to complete the line between its Jones Creek terminal and the ECHO terminal. For now, Fielden says, the crude is expected to be routed into Houston through the Rancho Pipeline, which runs from Sealy, Texas, to Houston and intersects with Seaway at Jones Creek.

Despite these challenges, the future of ECHO and other Gulf Coast storage terminals appears bright, given the soaring domestic crude market.

“The next two years will be very challenging for midstream crude logistics in the Gulf Coast region. The pace of the changes that have already been made is remarkable,” Fielden explained in an RBN Energy article titled, “Gulf Coast Crude Oil Flood Preparations: The Terminal Operators.”

“Crude terminal operators in the right location with the right facilities look set to benefit significantly from the process of rewiring and blending supplies to Gulf Coast refineries. Hopefully the preparations that these operators have made in expanded infrastructure will prove capable of handling the flood of new crude,” according to the report.

2022-10-10 - “There is downward pressure due to a slowing economy and inflation pressure is reducing demand,” said one executive who participated in the survey of oil firms operating in Kansas, Colorado, Nebraska, Oklahoma, Wyoming and parts of New Mexico.