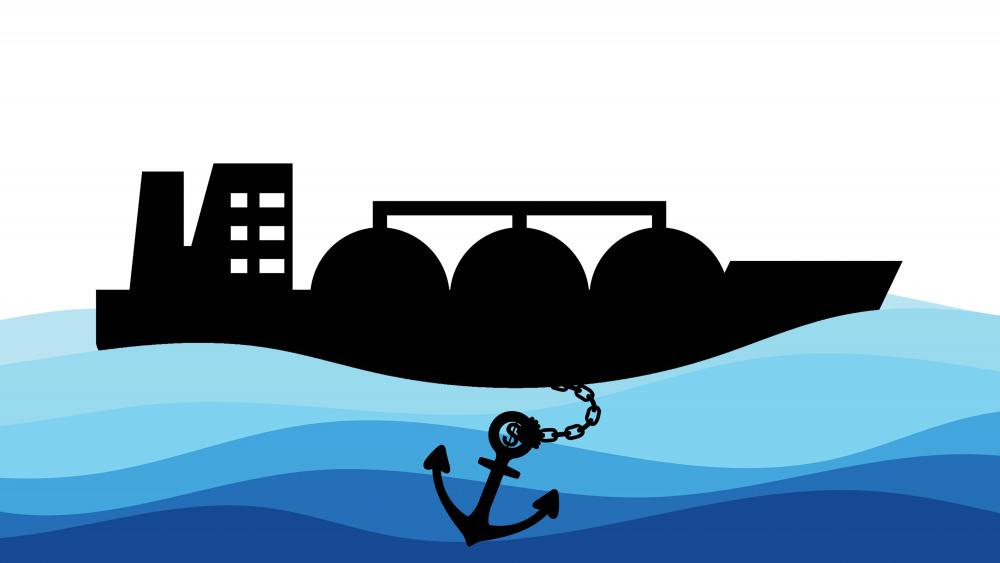 Currently there are about 15 U.S. LNG export projects that are approved by the U.S. Department of Energy but have been stalled—most of them for years—as capital has dried up.

Known as second wave LNG projects, many are to be located along the U.S. Gulf Coast. Hundreds of millions in upfront costs have been spent developing the projects. At present, there’s little chance these costs can be recovered. Now is the time to turn these stagnating assets into viable LNG export facilities.

As the world increasingly looks to transition away from fossil fuels—particularly coal, U.S. natural gas can play a much larger role. U.S. natural gas is abundant and a proven bridge fuel to replace coal and transition to less carbon-intensive energies. The shale gas revolution opened access to huge reserves which are now producing high volumes of low-cost natural gas. As such, U.S. gas producers enjoy a significant price advantage in the global gas market.

U.S. LNG projects have been unable to raise construction financing and therefore are stalled without a clear way to positive cash flow. Liquefaction plants and export terminals are expensive to design and build, taking five years or more to complete. The lack of progress by so many projects has hindered upstream optimal natural gas asset development, gas producers’ ability to access to new markets overseas, and U.S. economic growth and influence around the world.

To successfully raise the significant funds needed, second wave U.S. LNG project developers must change their business model. Proof of the need for a different business model is the large number of stalled projects whose near-dormant status remains unchanged year after year.

The “build it and they will come” approach is no longer working for prospective lenders, investors and buyers. LNG has become more of a commodity and the LNG spot market is growing. LNG market participants are increasingly opportunistic, shorter-term focused traders and intermediaries.

Things have changed significantly since the 2015 Paris climate accords. Financial institutions, asset managers, policy makers and others are recognizing the importance of action against climate change, and behavioral changes abound. While worldwide LNG demand is growing, gale force headwinds targeting the fossil fuel industry are presenting big challenges for the U.S. natural gas and LNG sector. To understand the wider impact of various headwind issues and the path forward for stalled U.S. LNG projects, getting the framing right is critical.

Several reports dealing with climate change mitigation have been published recently. The three reports cited here are particularly important and attracting the attention of heads of governments, large financial institutions and the global energy sector. The reports call for dramatic reductions of fossil fuel burning and greenhouse gas emissions to halt global warming.

“Carbon Bubble” Report: 2021 represents the 10-year anniversary of Carbon Tracker’s report titled “Unburnable Carbon: Are the World’s Financial Markets Carrying a Carbon Bubble.” The report highlights the financial risks associated with the fossil fuel industry. It introduced the concept of a “carbon budget” based on pioneering research dealing with how much more CO2 could be released into the atmosphere from burning fossil fuels before the 2 degrees Celsius warming limit would likely be exceeded. 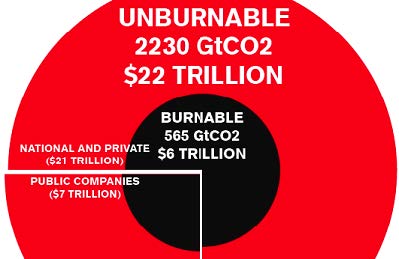 Regarding company valuations, the report said, “Investors are thus left exposed to the risk of unburnable carbon” and untapped assets would be considered “stranded assets.” Oil, gas and coal reserves contribute heavily to the ongoing value of energy companies. If targets for CO2 emissions were only partially achieved and less than 80% of assets remained untapped, asset valuations would still fall.

Net zero initiatives and rising ESG investments: According to the Net Zero Asset Managers Initiative group, almost half of all global assets under management are now focused on lowering the carbon footprint of their portfolio investments and adhering to Net Zero 2050 goals. The group says it has 128 signatories that manage $43 trillion of the $100 trillion asset management industry. These firms have signed up for responsible investments, stating they will consider ESG (Environmental, Social, and Governance) guidelines when allocating capital.

However, regulators have become alarmed at the pace of growth of the ESG market and ESG claims being made by products and companies. Some analysts estimate ESG investments will exceed $50 trillion by 2025, which represents more than a third of all global assets. And much of the ESG market growth is occurring so far without any real regulation. 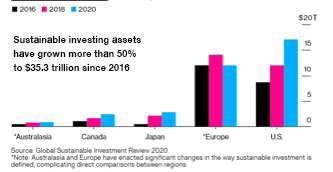 Greenwashing: In March 2021, the European Union introduced the Sustainable Finance Disclosure Regulation (SFDR). This anti-greenwashing initiative is beginning to rein in the global ESG market. About $2 trillion of investment funds have been impacted so far by the new European regulation as financial institutions are being held accountable for the representations of dubious ESG products sold. The EU’s initiative via the SFDR will have far reaching implications perhaps as the ESG investment global standard for disclosures, sustainability goals and compliance tracking.

“Greenwashing” has now become a headache for many European investment firms. As a similar anti-greenwashing initiative heads for the U.S., it may become problematic for U.S. firms as well. U.S. energy companies seeking to present themselves to the public or qualify for financing based on ESG credentials could also be exposed to increasing legal risks. Under evolving ESG regulations, companies can become legally obligated to live up to their ESG claims and the expectations of investors and financiers.

The Biden administration recently announced a plan that calls for solar and wind energy to provide 90% of U.S. electricity by 2050. The Department of Energy’s “Future Solar Study” calls for a power grid energy mix of 45% solar, 36% wind, 12% nuclear, 6% hydroelectric and 1% biopower / geothermal. Under the Biden blueprint, fossil fuels will account for 0% of the fuel sources for U.S. electrical power generation by 2050. The administration sees solar as the “cheapest and fastest-growing source of clean energy” and capable of producing “enough electricity to power all of the homes in the U.S. by 2035 and employ as many as 1.5 million people in the process.” The European Union has similar ambitions of eliminating fossil fuels in their electrical power generation energy mix by 2050 or sooner.

The math: Total annual U.S. natural gas consumption is about 30.5 trillion cubic feet (Tcf) with 38% used in power generation. That means, under the Biden plan, by 2050 about 11.6 Tcf per year of domestic natural gas sales will have disappeared for U.S. gas producers.

At today’s prices, the plan represents about $64 billion in lost annual sales revenue for the sector. Similarly, under the EU plan, natural gas sales by Russia to Western Europe will have disappeared for Russian gas producers which at present supply about 6.2 Tcf in volume and $34 billion in sales revenue per year. The loss of large gas markets will impact global prices as growing supply gluts chase shrinking demand. This condition will in turn disrupt further gas sector investment, development and asset values.

Although the fossil fuel industry and countries dependent on such revenues will stubbornly resist, the global transition away from fossil fuels to more ESG-friendly sources of energy is inevitable. The transition will not happen overnight but eventually will occur and likely at significant levels. Climate change mitigation efforts and the push to embrace alternative energies are real. The efforts are supported by powerful financial institutions and strengthening international resolve and policies. It’s becoming a question of transition timing and the process steps involved.

Overly aggressive energy transition efforts will negatively impact the U.S. natural gas and LNG sector. The sector is too important to risk its premature demise and billions in lost asset values. Not only is the U.S. natural gas sector a major domestic jobs provider and economic driver, but the sector can play a critical role as a bridge fuel in global climate change mitigation efforts by immediately replacing coal—the dirtiest fossil fuel.

Melanie Kenderdine, principal at the Energy Futures Initiative think tank, calls this approach the “green real deal.” Emerging markets around the globe welcome efforts toward a cost-effective transition away from coal. Natural gas can also serve as a particularly important, strategic asset in U.S. international diplomacy.

With potentially crippling headwinds facing the U.S. natural gas and LNG sector, advance planning and strategies must be put in place at private and government levels. Stalled U.S. LNG export projects are blocking the nation’s ability to fully leverage this vital natural resource. Considering the energy transition arguments being made and growing momentum behind them, it’s clear that time is short. The U.S. LNG export sector must act. New, innovative business models must be developed, urgently needed funds raised and the U.S. LNG export sector put on a path to dramatically expand.

David Scull is the CEO of BlueHawk Energy, Inc. He can be reached at dscull@bluehawkenergyinc.com.