Shell Midstream Partners LP added to its stakes in refined products pipelines on May 13, boosting its access to a growing supply from the U.S. Gulf Coast.

In a dropdown acquisition, Shell Midstream Partners agreed to pay its sponsor, Royal Dutch Shell Plc, $800 million for additional interests in the Explorer and Colonial systems.

Explorer is a 1,830-mile pipeline that transports gasoline, diesel, fuel oil and jet fuel with a capacity of 660,000 barrels per day. Meanwhile, Colonial—the largest refined products pipeline in the U.S.—starts in Houston and terminates in New York harbor, serving all major metropolitan areas along its route.

The Colonial pipeline supplies roughly 50% of the refined products consumed on the East Coast in the U.S., sourcing supply from about 29 refineries and delivering to more than 260 terminals, according to the company release.

The dropdown acquisition will increase Shell Midstream Partners’ interest in Explorer to 38.59% and in Colonial to 16.125%.

“This acquisition is evidence of our strategy in action—we will continue to build scale with diversified assets that provide robust, ratable cash flows,” Kevin Nichols, CEO of Shell Midstream Partners, said in a statement on May 13. “The Explorer and Colonial systems have the capacity to deliver some three million barrels per day of refined products, providing energy to key demand centers of the United States.” 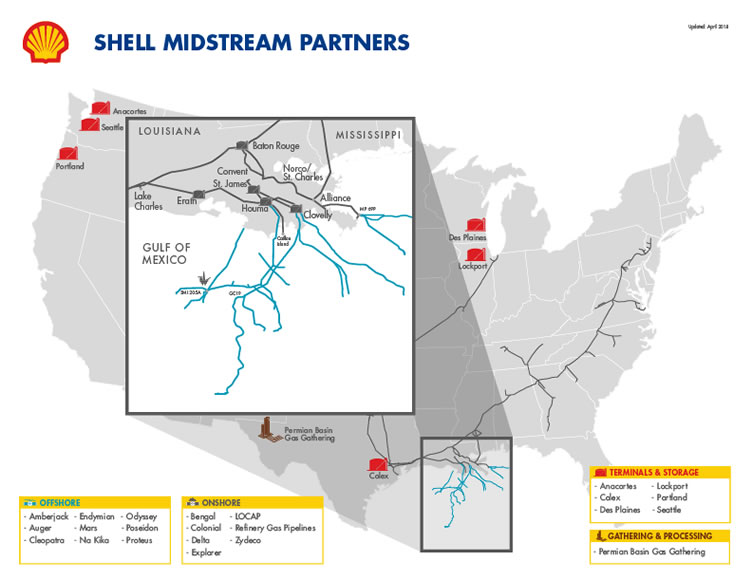 The transaction value, including proportional non-consolidated debt at Explorer and Colonial, reflect a roughly seven times multiple of the contributed interest’s forecasted next 12-months adjusted EBITDA.

Funding of the transaction is expected to comprise 75% debt through a credit facility with its sponsor and 25% equity placement to Shell Midstream LP Holdings LLC, a wholly owned subsidiary of its sponsor.

Shell Midstream Partners said it expects to close the dropdown acquisition in second-quarter 2019.

The terms of the acquisition were approved by the conflicts committee of the board of directors of the general partner of Shell Midstream Partners, which consists entirely of independent directors. The committee was advised by Evercore Group LLC as to financial matters and Hunton Andrews Kurth LLP as to legal matters. The Hunton AK deal team was led by Mike O'Leary, co-head of the law firm’s corporate team.