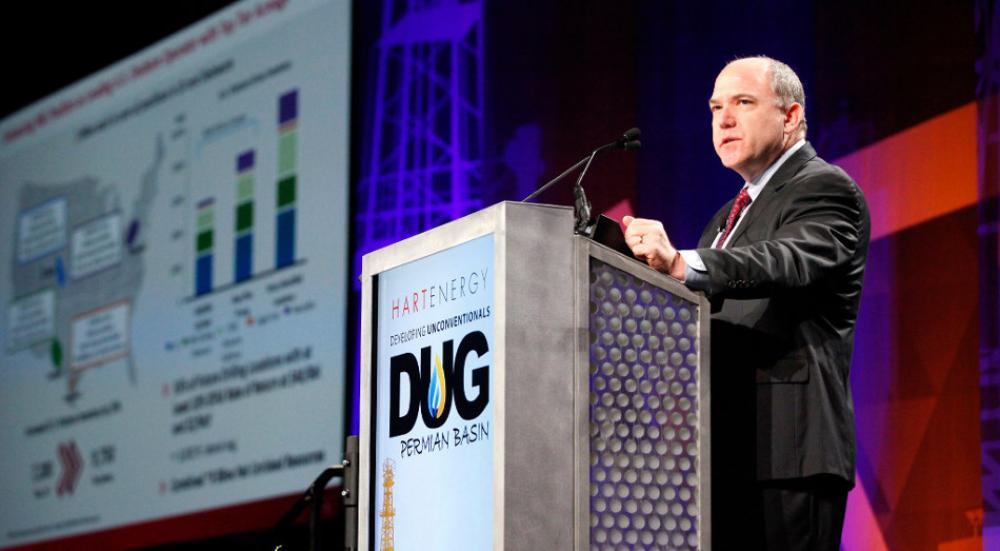 FORT WORTH, Texas—For Noble Energy Inc. (NYSE: NBL), a failure or undesired outcome isn’t something to hide when lessons learned can lead to improved techniques, production growth and strong economics.

“We’re always striving to find better ways. We’re always trying something new,” Gary Willingham, executive vice president of operations for Noble Energy, told a packed house gathered for DUG Permian Basin. “A lot of them work. Some of them don’t. But the one thing that I insist on is we share those learnings across the company as we continue to learn and improve going forward.”

The Houston-based company, known for its success onshore in shale basins such as the Delaware and the D-J as well as its massive deepwater developments offshore Israel, West Africa and the Gulf of Mexico, leverages knowledge gained at each of assets to help drive efficiencies across its portfolio. Whether it’s taking a page from the playbook of an offshore project and applying it to an onshore development or pushing the technical boundaries of lateral lengths and proppant amounts from shale basin to shale basin, the strategy appears to be paying off for Noble.

Noble has about 10,000 locations left to develop on its onshore U.S. assets with a total of about 8 billion barrels of oil equivalent net. This includes about 2 billion barrels in the Delaware Basin, a highly sought-after part of the Permian that has the majors and smaller players alike shelling out dollars for acreage in hopes of even bigger payouts. Noble is no exception, having added about 7,200 net acres through bolt-on transactions to its Southern Delaware Basin position in January with another 71,000 net acres in the Delaware Basin plus more in other areas of the Permian when its $2.7 billion acquisition of Clayton Williams Energy Inc. closes as expected in second-quarter 2017.

But don’t expect Noble to rest on its laurels.

When it comes to developing unconventionals, having significant positions in four of the best basins in the U.S.—the D-J, Eagle Ford, Marcellus and Delaware—makes a difference in Noble’s ability to test techniques and technologies in different areas and share learnings, according to Willingham. He explained how the company undertook the same degree of planning and subsurface expertise used with major global projects to the D-J, where it created integrated development plans that focus on large contiguous acreage positions. More land allows for pad drilling, long laterals, the buildout of scalable gathering and processing infrastructure for oil, gas and water to drive efficiency.

It started in the D-J, but the concept has spread to the Delaware. The Billy Minor central gathering facility—designed for oil, gas and water handling, including produced water recycling—is scheduled to go online by mid-2017. Based on Noble’s experience with similar designs in the DJ Basin, these type of facilities along with pad drilling and longer laterals will save the company about $1.5 billion over the life of the project, he said.

The full field development concept can also be seen as Willingham points out locations for future centralized facilities in the Delaware and notes long lateral development with average lateral lengths of 7,800 ft.

Knowledge gained in the D-J on spacing, resource assessment tools, real-time data were taken to the Marcellus, where longer laterals and tighter cluster spacing were tested along with some of Noble’s first horizontal refracks and improved water management practices. Lessons learned here were transferred to the Eagle Ford and the Delaware, where high intensity completions are among the focus areas, he said, adding the results speak for themselves:

“Since the vast majority of all of our capital invested in resource plays is associated with drilling and completion it’s really imperative that we maximize the capital efficiency of those dollars,” he said.

Noble also remains committed to early testing, even studying some well specific flowback procedures to test inter-well communication between laterals, he said. The company is also pumping more proppant. The standard has already risen from 2,000 pounds per foot (lbs/ft) to 3,000 lbs/ft. Now, the company is testing up to 5,000 lbs/ft.

Ongoing multizone tests are underway in the Delaware as well, focusing on horizontal and vertical spacing to better understand resource recovery. Testing continues at the three-well Monroe pad with 10,000-ft laterals targeting the 3rd Bone Spring, Wolfcamp A Upper and Wolfcamp A Lower. At Calamity Jane, the seven-well pad with 10,000-ft laterals is taking aim at the 3rd Bone Spring, two wells; Wolfcamp A Upper, three; and Wolfcamp A Lower, two wells.

“Our focus has been clear: maximize efficiencies, learn from what we do and maximize value creation from our acreage,” Willingham said. “Through advanced subsurface modeling, extended laterals, pad drilling, optimized high-intensity completions, managed flowback, controlling our own infrastructure and we’re always looking for ways to improve further and ensure those learnings.”

“The best part is in the Delaware we’re going to be positive free cash flow generating by next year,” Willingham said. “That’s the benefit of having extremely efficient operations that are focused in a high oil content area.”