Ovintiv Inc. named Brendan M. McCracken as president on Nov. 12, replacing Michael McAllister, Ovintiv’s former president who retired in June after 20 years with the company and nearly 40 years in the industry.

McCracken, who started with Ovintiv—formerly Encana—as a summer intern, has played a significant role in the oil and gas producer’s success, according to the company website.

“Today’s appointment recognizes Brendan’s significant impact on our success and reflects our confidence in his leadership,” Ovintiv CEO Doug Suttles said in a statement. “This move is part of our ongoing executive development and ensures that we have leaders for the future.”

Throughout his career at Ovintiv spanning more than two decades, he has held a variety of engineering, commercial and leadership positions. These have included vice president and general manager of Ovintiv’s Canadian operations as well as vice president of investor relations.

According to the company release, McCracken will maintain his current responsibilities following the promotion, effective Dec. 1. Reporting to him will be the COO, executive vice president of midstream, marketing and fundamentals, and the executive vice president of corporate services. No senior leadership positions are being added with this announcement, the company said.

McCracken is a member of the Association of Professional Engineers and Geoscientists of Alberta. He is active in several organizations including the American Petroleum Institute Upstream Committee, Canadian Association of Petroleum Producers and Dean’s Advisory Council to the Mount Royal University Faculty of Business and Communications. He graduated from Queen’s University with a bachelor of science degree in mechanical engineering and from the University of Oxford with a master of business administration.

Ovintiv is a North American oil and gas producer with roots dating back to the late 1800s. Earlier this year, the company completed its rebrand to Ovintiv, which included the move of its headquarters from Calgary, Alberta, to Denver. 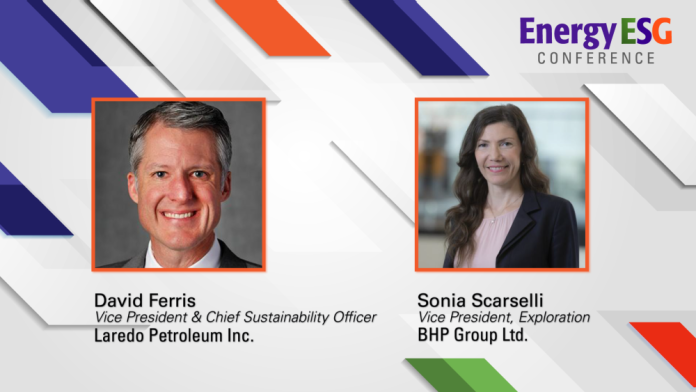 This roundtable discussion featuring leaders from Laredo Petroleum and BHP Group focuses on the emerging ESG priorities of oil and gas operators.