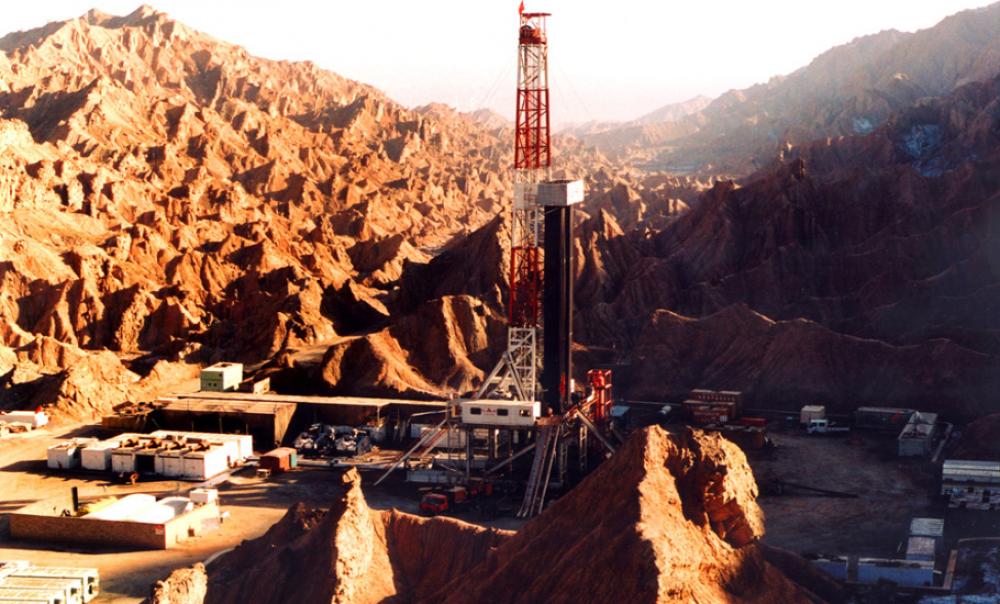 Between a rock and a hard place, China’s landscape can make shale gas E&P a challenging environment in addition to the challenges presented by accessing sufficient water resources to carry out hydraulic fracturing work. (Source: PetroChina)

When China’s first large-scale shale gas project entered commercial production in March 2014, observers believed it would be the spearhead for others to follow. But that second wave of projects in the country’s nascent shale gas industry has yet to properly emerge, with its existing unconventional gas production still largely coming from its better established tight gas projects.

China Petroleum and Chemical Corp. (Sinopec) is pushing hard, however, on its Fuling Shale gas field to stick to its ambitious production plans. The company still expects to expand the field’s annual production capacity to about 5 Bcm (176 Bcf) at present and is sticking to a goal of delivering 10 Bcm/year (353 Bcf/year) by 2017. The company has previously gone on record to say it intends to invest close to $4 billion on the first phases of the development.

Drilling program
Initially producing 600 MMcm/year (21 Bcf/year) as of year-end 2013, Sinopec has carried out a regular drilling program throughout its first development phase at Fuling.

This saw the company build and install 32 drilling platforms and spud 75 wells by year-end 2014, with individual bores flowing at rates of up to 550 Mcm/d (19.4 MMcf/d). By year-end 2014 the company had achieved an average output of more than 3.6 MMcm/d (127 MMcf/d) and a cumulative total for the year of 2 Bcm (70.6 Bcf), ahead of schedule. Up to 130 wells were planned to be drilled by the end of the first phase, with more than 40 drilling platforms to be built and installed.

The completion of that initial phase and the following secondary phase of development by the company (with up to another 100 wells to be drilled) are aimed at accessing more than 341 Bcm (12 Tcf) of shale gas reserves to hit its 10 Bcm/year target by 2017. That will come mainly from its activity in the Jiaoshiba Block within the Fuling Field area as well as further exploration and development activity in the Dingshan and Nanchuan blocks in southeastern Sichuan province, central China.

Although accessibility to water is an issue in much of China, Sinopec said it is able to utilize the existing water supply in the region for its hydraulic fracturing requirements as well as increasingly recycling drilling and fracturing fluids.

Drilling footage
The company reported toward year-end 2015 that as of mid-year it had achieved a total drilling footage on Fuling of more than 1 MMm (3.3 MMft), with its production capacity having exceeded 10 MMcm/d (353 MMcf/d).

It also has commissioned a 134-km (83-mile) shale gas transmission pipeline in the area, according to the state news agency Xinhua, which will eventually be able to flow 6 Bcm/year (211 Bcf/year) from the Fuling Field.

The project remains China’s only shale gas development to have achieved commercial production, and its progress means the Chinese government’s official year-end 2015 target of 6.5 Bcm/year (229 Bcf/year) of shale gas production was scheduled to be achieved, thanks to other smaller additional contributions from Sinopec’s fellow domestic major, PetroChina—something that just a year ago was seen as overoptimistic for the country’s 12th five-year plan.

PetroChina’s shale gas developments are admittedly lagging behind Sinopec’s—it has drilled far fewer wells so far—but “demonstration” zones in its Changning-Weiyuan blocks in Sichuan province are contributing enough to hit the overall 6.5 Bcm/year goal for the country. Much of this company’s focus, however, has been less on shale and more on tight gas and conventional gas developments.

Shale gas target of 6.5 Bcm
Considering total shale gas production for China in 2013 was just 200 MMcm (7 Bcf), according to the Ministry of Land and Resources (out of a total domestic gas production figure of 117 Bcm [4 Tcf] that year), the 6.5 Bcm/year total for 2015—if confirmed by official sources in the next few months—would be a significant achievement.

However, the pressure to ramp up gas production as rapidly as possible in previous years has lessened somewhat. China’s economic expansion has slowed down in relative terms despite its GDP growing by 7%. Domestic gas demand growth dipped substantially during 2015, with the country even forecast to potentially have a surplus of gas (up to 10 Bcm) by year-end 2015, something that would have been unthinkable less than two years ago.

Air of uncertainty
This all adds to an air of uncertainty over the likely pace of progress of China’s fledgling shale gas industry despite the impressive achievements so far at Fuling.

The International Energy Agency’s (IEA’s) latest “World Energy Outlook,” released in November 2015, warned, “The pace of China’s unconventional gas growth is a major uncertainty: Policies encouraging this development are in place—with production projected to exceed 250 Bcm [8.8 Tcf] by 2040—but aspects of the geology, limited water availability and population density in some key resource-rich areas, alongside regulatory issues related to pricing, access to resources and domestic pipelines, militate against a very rapid rise in output.”

The IEA’s executive director, Maria van der Hoeven, already said as much in a speech at the third IEA Unconventional Gas Forum in Chengdu earlier in 2015, stating that despite China being one of the world’s largest resource holders of unconventional gas, “significant uncertainties remain about the extent to which this resource will be developed.”

Gas production forecast
With the IEA also forecasting that China’s overall growth in gas production is likely to slow further as its conventional gas assets mature and as the “knock on” effect of lower oil prices impacts upstream spending, the country looks set to remain reliant on LNG and pipelines to import about two-thirds of the gas it requires between now and 2020.

In mid-2014 the IEA predicted that China would be able to meet half of its new gas demand from domestic resources, most of that coming from unconventionals. However, the latest available figures for 2015 showed that China produced 103 Bcm (3.6 Tcf) of gas domestically in the first 10 months of the year—just 2.7% higher than for the same period in 2014 and apparently confirming the IEA’s concern over a slowdown in domestic gas output growth.

With China having an estimated 31 Tcm (1,115 Tcf) of recoverable shale gas reserves, few doubt the riches that lie beneath its lands. But despite Sinopec’s impressive efforts on Fuling so far, the aggressive targets set by the country’s Ministry of Land Resources to achieve 60 Bcm/year (2.1 Tcf/year) of shale gas production nationally by 2020 look to be stuck on the slow boat.