Two things happen when we flip the proverbial switch: the lights go on and the lights stay on.

Sure, there are power outages, but in the U.S., the first question that comes to mind when the power goes out is, when will it be restored? In many parts of this world, that question often veers toward whether power will be restored at all.

The ability to keep the lights on matters. It requires having enough fuel, the ability to access it and a system that is properly maintained to distribute it efficiently.

There have been periods of uncertainty. The term “energy crisis” entered the American lexicon in the 1970s not because there was insufficient oil and natural gas in the world, but because U.S. citizens lacked sufficient access to it. Domestic consumption had overtaken production, which required imports of crude oil to meet demand. When those imports were cut off, motorists learned the hard lesson of energy insecurity while waiting in long lines to buy limited amounts of gasoline. It became a badge of patriotism to conserve fuel by driving slower and lowering the home thermostat by 6 degrees.

“Until the shortage eases, it’s up to all of us to make what there is go further,” country music legend Johnny Cash intoned in a 1973 commercial for Amoco. “There’s a shortage of energy but not of the American spirit.”

The notion of American energy shortages now seems as quaint as tales of the early days of professional football when forward passes were prohibited. But it is quaint for a reason: the country made a concerted effort to increase domestic energy production so shortages would not happen here again.

“The idea of energy independence has become such a crucial bellwether, if you will, for understanding the psyche of the United States,” said Ramanan Krishnamoorti, chief energy officer with the University of Houston. “Part of the challenge has been not being able to control things. Having our foreign policy be dictated by our need for energy has been something that has left a very poor taste for most Americans.”

Such feelings are not unique to the U.S.

“Because energy is so important, countries that don’t have enough of their own supplies can find themselves in the middle of geopolitical tugs-of-war,” said Seth Blumsack, professor of energy policy and economics and international affairs with Penn State. “Many countries in Eastern Europe, for example, have long felt held hostage by Russia because there is so much dependence on Russian natural gas.”

The subsurface of the U.S. has never lacked for oil and gas and won’t any time soon (see “How Much is A Lot” article), but not all of it is easily accessible. Achieving energy security required transformational technology to gain access to difficult-to-reach natural resources. That required sound public policy for the country to emerge from the dire energy landscape of the 1970s.

The policies provided support in two ways: financial and technological. The Nonconventional Fuels Tax Credit (also known as Section 29 Tax Credit), designed to incentivize production of oil and gas from tight formations, took effect in 1980. It spurred innovations in drilling technology, which led to higher production. Sandia National Laboratories in New Mexico conducted critical research that led to the development of microseismic imaging, an essential technology used to accelerate production.

What brought government and private companies together was the shared goal of exploiting the enormous volumes of natural gas and oil trapped in shale formations. Shale is known as a “resource rock,” where organic material is packed tightly. This material turns into oil and gas over millions of years, over time migrating to “reservoir rock.” This is where oil and gas was traditionally pumped to the surface.

The financial incentives and technological support from government enabled private companies to bring about what is known as the “shale revolution” that began in 2005. The revolution brought about two extraordinary changes in the U.S. energy system. The first was an immediate boost in the amount of natural gas produced. The second was the creation of a natural gas market price independent of oil.

The natural gas produced before the shale revolution was almost exclusively what is known as associated gas, or gas that comes out of the ground during oil production. As a co-commodity with oil, gas had a market price that was aligned with oil. Its production was aligned as well. So when oil production in conventional areas fell and oil imports rose, gas production and imports rose too. To handle that increase in imports, construction began on huge facilities, mostly on the coast of the Gulf of Mexico, to convert imported liquefied natural gas to gaseous form so it could be transported in pipelines.

“Through much of the early and mid-2000s, the U.S. was preparing to become a major natural gas importer, with implications not only geopolitically but also economically for the cost of electricity production and for natural gas for other uses,” Penn State's Blumsack said. “The advent of economical unconventional natural gas production in the United States stopped these gas import projects dead in their tracks and has been a major factor in the continued low cost of electricity.”

The accompanying chart illustrates how natural gas production failed to keep up with consumption by 1986, leading to the rise in imports. When shale gas production began its dramatic rise in 2005, imports started to fall. By 2017 production finally eclipsed consumption and imports dropped to virtually zero.

The benchmark prices for crude oil and natural gas tracked each other fairly closely prior to the shale revolution. In early 2010, however, the chart shows gas beginning to go its own way as traders reacted to suddenly higher volumes of natural gas on the market. Suddenly, gas was more affordable than oil. 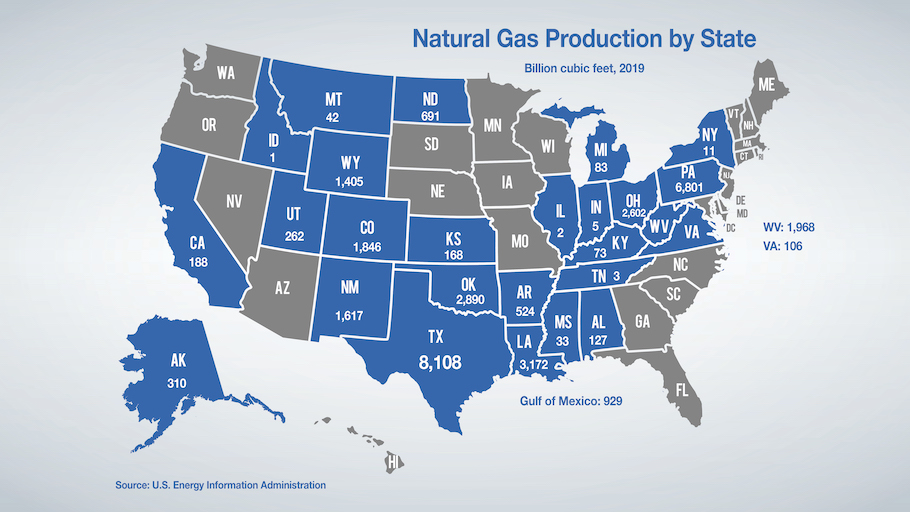