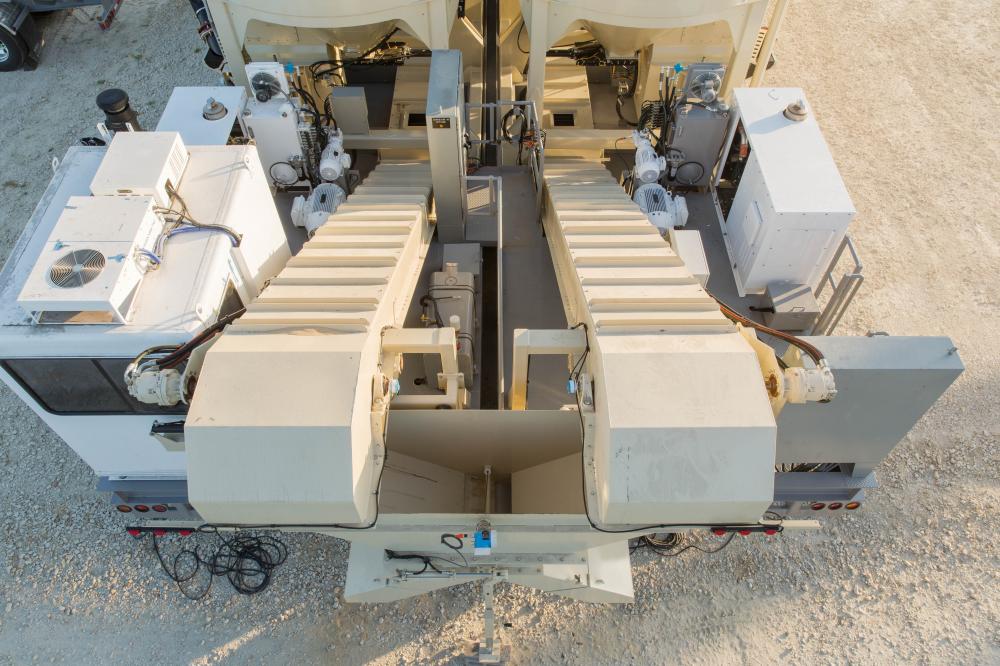 The SandBank loads a silo at 275 tons of proppant per hour using a bucket elevator system and feeds blenders between 700 lb/min and 20,000 lb/min of proppant using auto-controlled conveyors. (All photos courtesy of NOV)

Technology developments in hydraulic fracturing continue to result in smarter solutions. As increasingly longer horizontals become more common, especially in shale basins, proppant usage is higher than ever before. Drilling advancements, downhole proppant placement and zipper fracture designs are dramatically impacting the number of wells per pad, the number of stages per well and time reduction between fracture stages. As such, sand logistics are proving to be a major player in the success of fracturing operations. Conventional onsite storage systems are unequipped to handle proppant requirements in today’s industry, resulting in insufficient sand volume ready to feed the fracture operation. Shortages of hot sand on site lead to increased nonproductive time (NPT), adding to operational costs and unnecessary delays in the well completion process. 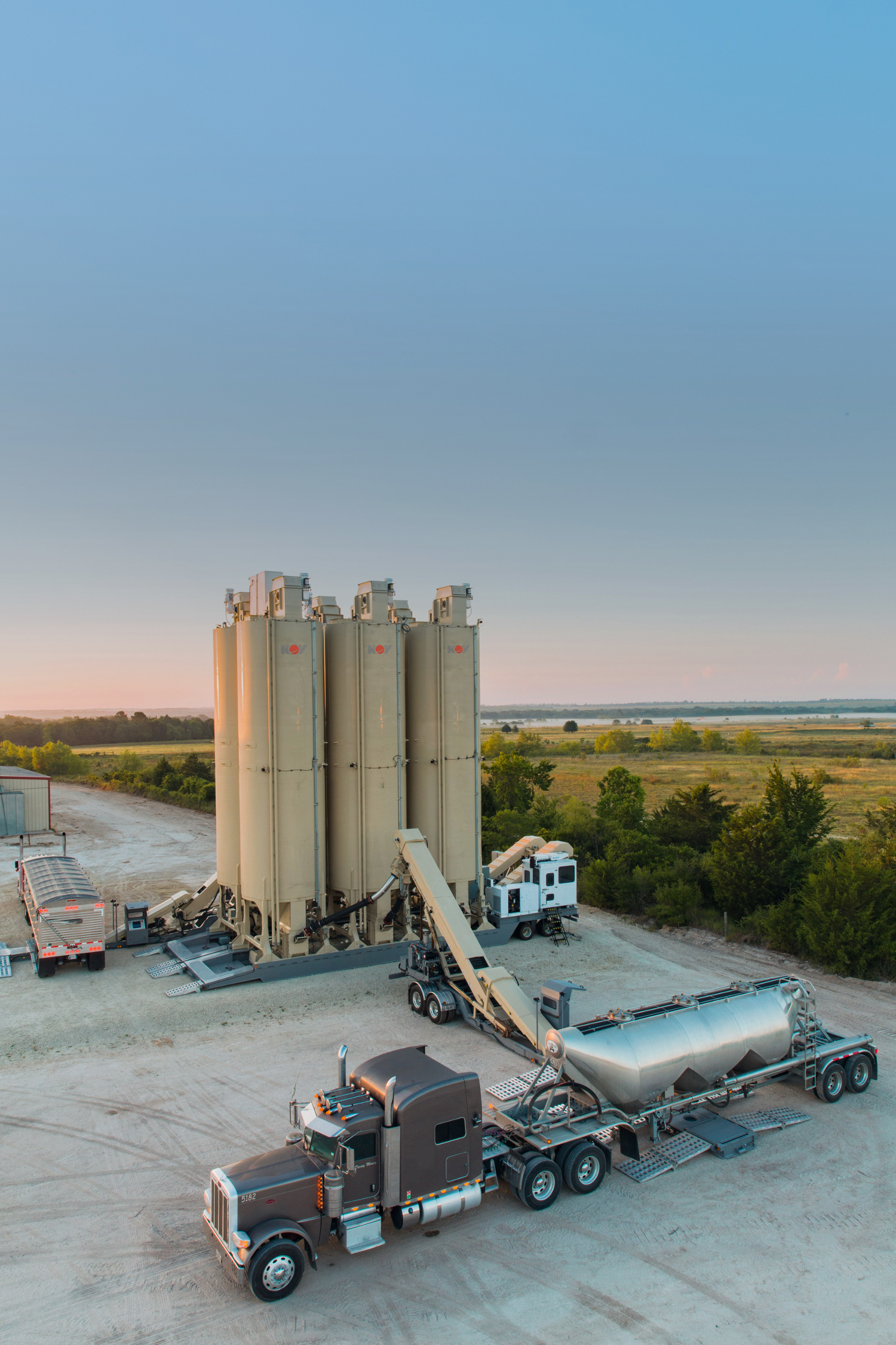 In addition to focusing on improving storage capacity, the engineering team sought to drastically reduce the time associated with unloading sand transports on location. This was accomplished by combining a belly dump drive-over conveyor belting system, a swiveling diverter head and silos outfitted with integral bucket elevators. The elevators are capable of moving 275 tons of proppant per hour. Using two drive-overs in a six-pack configuration with a one-time setup allows four trucks to simultaneously unload at a total rate up to 550 tons per hour.

A significant added benefit of this system is that it eliminates the need for the pneumatic conveying of sand. The SandBank proppant silo system can unload a transport more than twice as fast as pneumatically conveying into traditional fracture sanders, a 58% reduction in unload time. Compared to pneumatically filling silos, it unloads more than three times faster, a 70% reduction in unload time. Improvements such as this will have a direct impact on demurrage cost reduction incurred for sand logistics on a well site.

By increasing the amount of sand available on location and significantly reducing time to unload a sand transport, SandBank minimizes the risk of proppant shortages. This effectively drives improved uptime, reduces potential NPT and mitigates delays associated with sand logistics.

The engineering team emphasized redundancy, which served as a large driver for the system design. SandBank features bucket elevators in each silo, offering an advantage over other methods of silo loading with standalone, independent bucket systems. Pneumatic fill pipes also are included on each silo. Two drive-overs are included and can be exchanged with a simple swap out if necessary. The two bases each contain a conveyor designed with automatic or manual blender feed control capable of delivery rates between 700 lb/min and 20,000 lb/min each. All six silos can gravity feed either conveyor. The integrated six-pack configuration can supply two blenders.

Each SandBank base contains a 480-V, alternating current diesel-electric generator for system power supply and offers critical function generator backup across the bases or shore power options. Additional features include a pressurized climate- controlled operator cabin with complete system controls, automated silo overflow protection, and simultaneous loading and unloading capabilities. For ease of mobilization and setup, a complete SandBank system includes silo transport trailers with hydraulic lift cylinders and an integral lift frame. These trailers can be used to stand up silos on a base or the ground and can connect to either side of a silo, providing additional handling or positioning provisions. 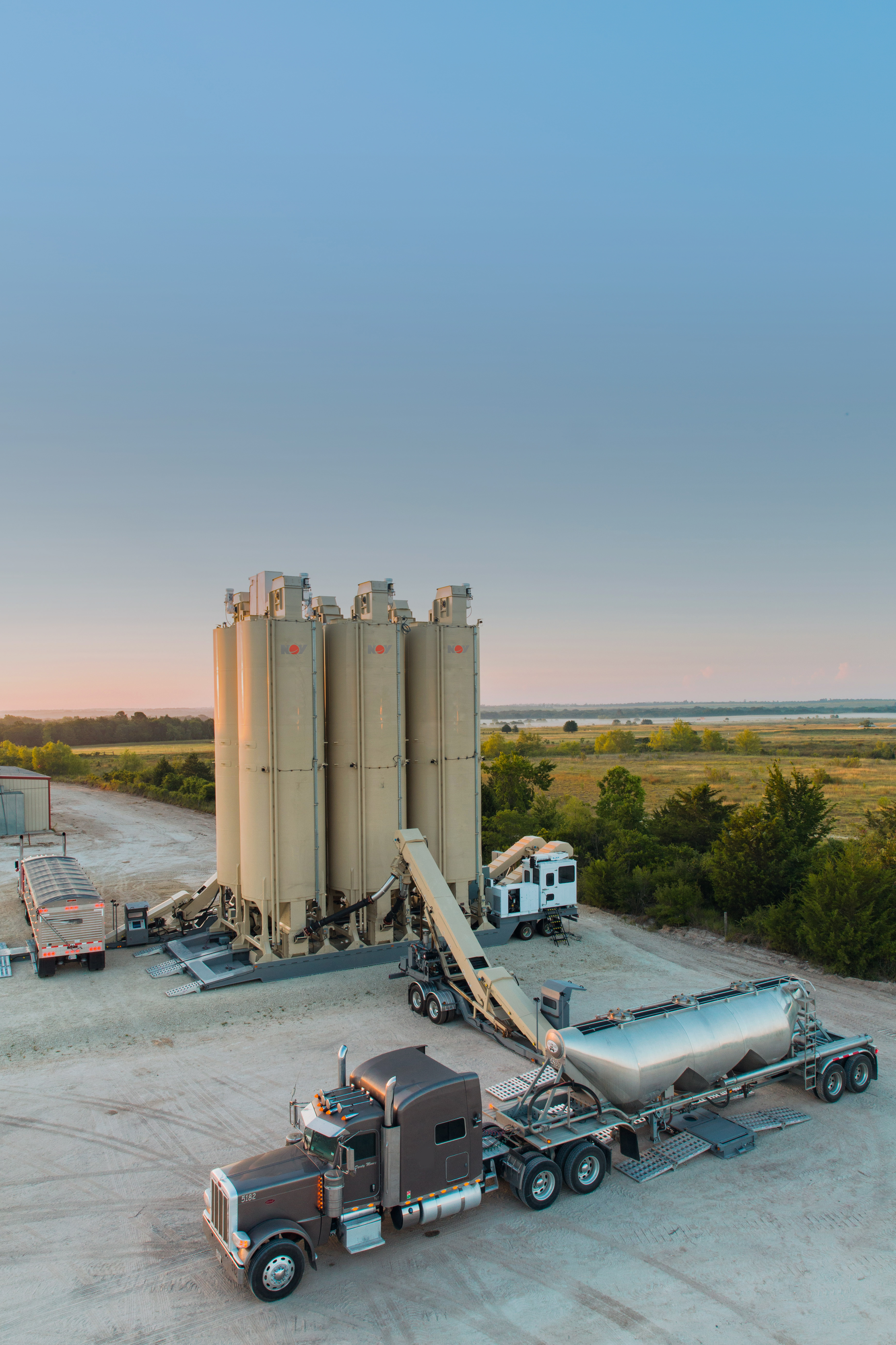 As hydraulic fracturing demands have changed, so have industry regulations. The U.S. Occupational Safety and Health Administration (OSHA) is changing requirements to protect personnel from exposure to crystalline silica. Hydraulic fracturing operations in the oil and gas industry are required to implement dust controls to limit exposures to the new permissible exposure limit (PEL) by June 23, 2021. The new PEL will be 50 μg/cu. m averaged over an eight-hour day. To meet future industry regulations, NOV focused on mitigating dust exposure by designing fully enclosed conveyor systems, implementing a gravity feed protocol for the sand transport and silo unloading processes, and incorporating a pressurized operator cabin.

Compared to existing proppant storage solutions, NOV’s SandBank proppant silo system enables the industry to accommodate the latest hydraulic fracturing demands. In addition to offering the ability to store significantly larger volumes of sand to feed the fracturing spread, the system offers more efficient loading and unloading of the silos.

Built-in redundancy solves common challenges associated with traditional proppant storage. The system puts the end user in the optimal position to reduce NPT on location and capitalize on cost savings. By minimizing dust, SandBank also drives safety improvements and helps the industry prepare to meet upcoming OSHA regulations. The product will undergo field trials late in the third quarter of the year.