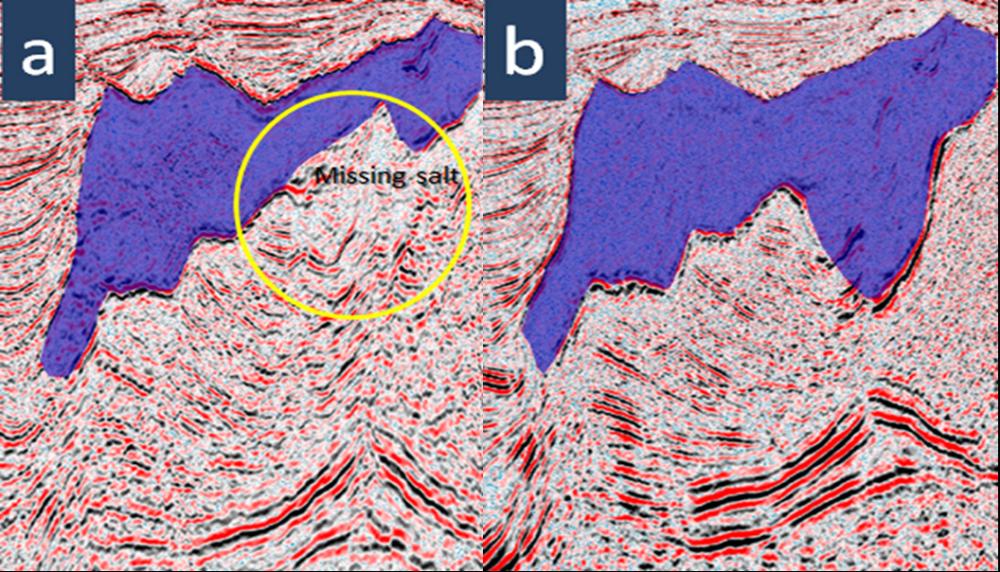 Producing subsalt images representative of true geology is a major challenge for exploration. Subsalt exploration in the Gulf of Mexico (GoM) improved in the 1990s when modern 3-D prestack depth migration became available. The Mahogany discovery in 1993 proved the subsalt profit potential in the GoM. Since then, advanced seismic acquisition and processing technologies have been applied in the GoM for subsalt exploration, improving images and leading to major subsalt discoveries.

Salt affects reservoir formation and hydrocarbon migration. But salt presents an issue for imaging because it prevents the penetration of seismic energy and distorts the images underneath. Due to its unique petrophysical and velocity characteristics, salt must be interpreted into velocity models for seismic depth migration, so salt is often interpreted for an imaging purpose rather than for an exploration purpose.

Evolution of salt interpretation for depth imaging
Salt interpretation for depth imaging, along with the seismic acquisition and processing technologies, has evolved (Table 1). Before 2006 salt modeling was focused on the shallow salt canopy due to limitations of seismic images. Interpreters struggled between two philosophies, conservative and aggressive. Conservative meant the interpreters only picked salt that was clear on the seismic image, and aggressive meant the interpreters picked more salt, guided by geological concepts and imagination. Picking skills over geological concepts was often more effective to produce reasonable images. Shallow salt models were often incomplete (Figure 3a), and when deep salt was added to the salt model, it usually was subjective. Long run time for migrations often caused interpreters to forget the original concepts/purposes of the interpretation.

Starting in 2007, improved 3-D technology and more experience increased the confidence of salt interpreters to add details in the deeper canopy salt model. Salt models were more complete in the shallow. The model in Figure 3b shows significant improvement of the subsalt image, the canopy base and the anticline below. Interpreters with a data processing background often had the advantage to map the shallow salt that impacts subsalt imaging in a predictable way. The industry was ready for new acquisition and processing technologies because it became clear that many subsalt imaging issues could not be solved by narrow-azimuth surveys and Kirchhoff or wave-equation migration. 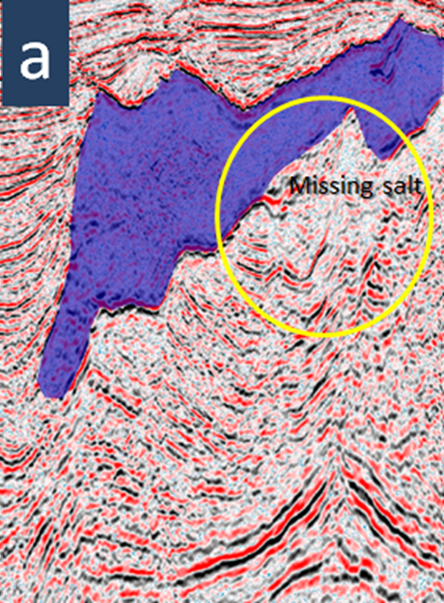 From 2009 to 2015, WAZ 3-D and RTM processing started to dominate imaging in the GoM. Well-defined Cenozoic salt meant deeper Mesozoic salt could be studied seriously. The imaging impact of “adding” or “reducing” salt was increasingly unpredictable due to the complexities of deep salt and its multidirectional impacts to seismic imaging, and interpreters who had strong knowledge of regional geology and salt tectonics retook the leading roles for salt interpretation. A threelevel salt model was common practice for salt interpretation (Figure 1). Still, poor definition of the Mesozoic salt caused an image issue below (Figure 4a).

From 2016 to 2018, mature salt tectonic concepts helped produce improved salt models to enhance images when the seismic industry emphasized reprocessing to add more value to the existing seismic surveys. New multi-WAZ processing technologies and faster turnarounds helped interpreters to add details to the Cenozoic model and Mesozoic models (Figure 2 and Figure 4b). The salt interpretation was more efficient and effective when improved computers and technology produced a full migration overnight and interactive processing generated a subsalt image within minutes. 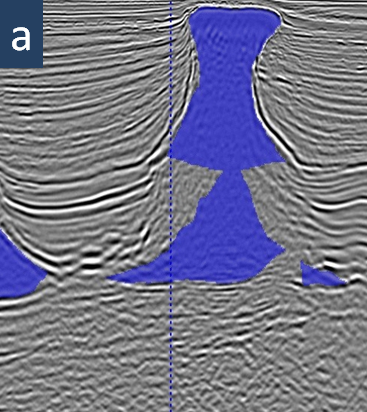 Current day
Geometries of shallow salt are well defined in many areas in the GoM, but details of salt-sediment interfaces are yet to be interpreted and deep salt remains a significant challenge. Application of salt scenario test workflows, development of automatic software and new acquisition and processing technologies are ongoing efforts for better salt interpretation and better salt models. Salt scenario tests for specific salt model issues in complex areas are increasingly popular. A scenario test is to run models with different salt tectonic concepts, compare results, understand salt and its impact, and apply the best concept to the production modeling. Unlike production salt modeling, scenario test modeling usually is quick and often does not need to be very accurate. Any stage can benefit from scenario tests, which are more flexible than production model-building workflows. Although scenario testing is increasingly important for salt modeling projects, conventional salt modeling workflow is still an accurate way to build a salt model.

Interpretation of salt is time-consuming. While conventional automatic software, developed for formation boundaries and faults, can automatically detect some salt boundaries, results often include random bad picks, which take time to fix. These software packages are helpful for salt model accuracy in simple areas but very often do not help much with project timing due to extra time on fixing those bad picks. Efforts are ongoing to develop interpretation tools for better recognizing salt textures and salt sediment interfaces to assist salt interpretation.