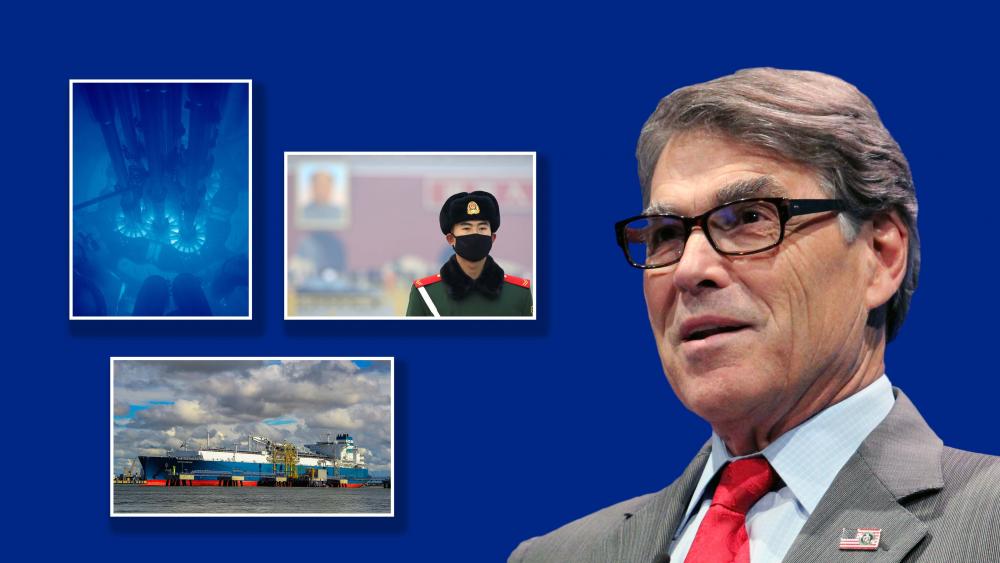 U.S. Energy Secretary Rick Perry discussed how technological innovations and U.S. energy abundance can benefit the world by providing affordable and low-emission energy at CERAWeek by IHS Markit. At left is nuclear research conducted at the Idaho National Laboratory; a soldier in China’s Tiananmen Square wearing a mask because of air pollution; and the Independence FSRU, a part of Lithuania’s strategy to no longer be solely dependent on Russia for natural gas. (Source: Hart Energy, Shutterstock)

The U.S. energy secretary brought his sunny outlook and enthusiasm for technological innovation to CERAWeek by IHS Markit, extolling the dramatic advances made by the U.S. oil and gas, and renewable sectors, as well as chiding global rivals Russia and China for their disregard for international law and the sanctity of contracts. And during a press conference on March 13, he even expressed a willingness to talk to U.S. Rep. Alexandria Ocasio-Cortez (D-N.Y.) to discuss her Green New Deal resolution.

But while the U.S. has claimed the top spot in the world in oil and gas production, and returned to the role of energy exporter, Perry expressed pride about progress in the area of renewable energy sources as well, and added some hometown bragging.

“Over the past two years, innovation has expanded our solar energy by nearly 90% and it’s done the same with our wind energy,” he said. “This year, wind energy will exceed hydro power generation for the first time ever. Texas now produces 15% of its total energy from wind and solar. That is more, percentagewise, than our friends in Europe. You’ve been surpassed, Europe, by Texas!”

In stressing the new global influence that the U.S. enjoys as a result of its growing oil and gas supplies, Perry echoed remarks by Secretary of State Mike Pompeo at the conference on March 12.

“Thanks to innovation, we’ve got more than enough energy to share with the world,” he said. “With that energy comes freedom of choice for energy consumers everywhere, including places where it never existed before.

“For those countries, choice means this: If they were bound to just one nation for their energy needs, they are bound no more.”

Specifically, Perry said the U.S. opposes two projects sponsored by Russia’s natural gas giant Gazprom: the Nord Stream 2 pipeline under the Baltic Sea that would connect Russia to Germany; and the TurkStream pipeline connecting Russia to Turkey across the Black Sea. Those projects could enable Russia to coerce and intimidate other countries, specifically Ukraine and NATO ally Turkey.

In response to a reporter’s question, Perry had some blunt words about international sanctions against Russia, which has supported the regime of Nicolás Maduro Moros in Venezuela. The government, which is not recognized as legitimate by the U.S. and over 50 countries, has blocked humanitarian aid at the border.

“For countries to support the Maduro regime is a very poor signal, in my opinion, just on the humanitarian side,” he said. “So the idea that the United States would have the option to use sanctions against a country that is supporting a regime that is involved in the most heinous acts against its citizens, I think, is quite acceptable.”

By contrast, the administration’s energy approach with other countries in some ways parallels points made in the Green New Deal.

The non-binding resolution, sponsored by Ocasio-Cortez in the House and Sen. Ed Markey (D-Mass.) in the Senate, calls for “promoting the international exchange of technology, expertise, products, funding, and services, with the aim of making the United States the international leader on climate action, and to help other countries achieve a Green New Deal.”

Perry said that if a discussion with Ocasio-Cortez could be arranged, he would want her to understand how the increased use of natural gas has cut emissions in this country and could do the same when exported as LNG. He added that countries dependent on coal-fired generation would benefit by adopting U.S. carbon capture utilization technology to lower emissions.

“I think she and I would both say that those are good goals,” he said, noting that while the two might disagree on points of the resolution, there was no reason to be disagreeable about it.

“Sorry, I’ve been in this business now for a pretty good spell and I’d rather be agreeable,” Perry said. “Life’s too short to be pissed off all the time.”