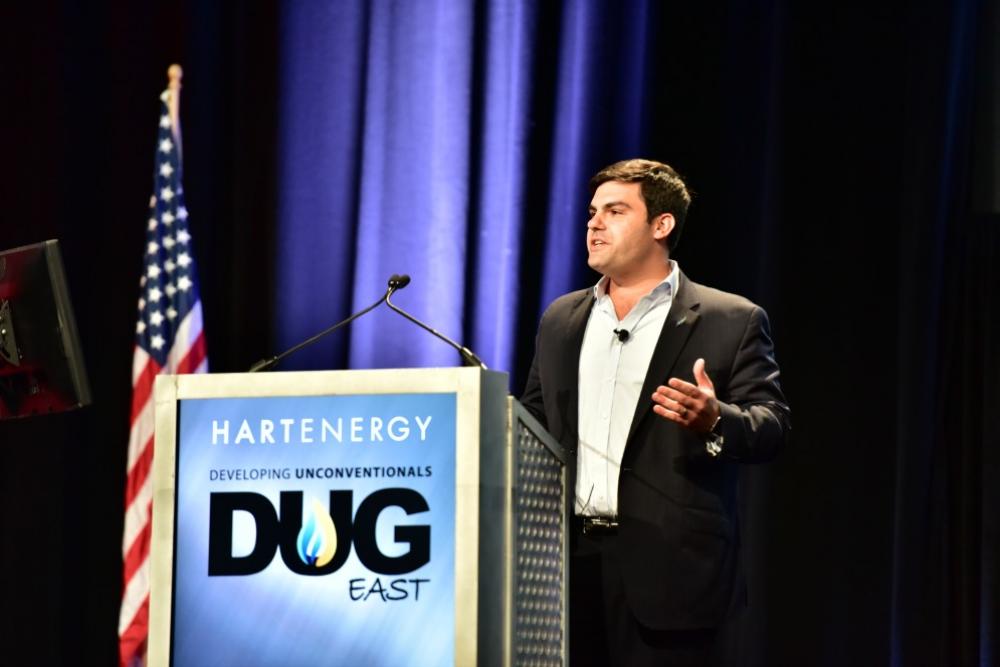 Toby Rice speaking at Hart Energy’s DUG East conference in 2016. At the time, he served as president and COO of Rice Energy. (Source: Hart Energy)

The brothers behind Rice Energy filed a lawsuit on April 25 against EQT Corp., the company which acquired Rice in a multibillion-dollar shale merger over two years ago, as the dispute between the two groups continues.

The lawsuit, filed by Toby Rice on behalf of the Rice team, claims EQT and its board of directors are manipulating the company’s upcoming shareholder election to thwart the proxy campaign launched by the Rice team earlier this year.

Rice brothers, Daniel, Toby and Derek, started Rice Energy while still in their mid-20s and quickly grew the company from a family-owned operation into a billion-dollar enterprise in the span of a decade. The brothers eventually sold Rice Energy and its roughly 250,000 net-acre position in the core of the Marcellus and Utica to EQT for $8.2 billion in what was the most expensive U.S. shale merger of 2017.

Following close of the transaction in late 2017, the brothers went on to form a multi-strategy fund named Rice Investment Group. However, the brothers have still keenly watched the progress from the EQT-Rice combination, in part because their fortunes are tied to EQT’s performance as the 2017 merger included a payment of $1.3 billion in cash plus $5.4 billion in EQT equity.

Since December 2018, Toby and Derek have voiced concerns over EQT management and operational efficiencies. The brothers have also said that they disagree with the company’s approach so far and on March 21 revealed their director nominations for the Appalachia shale gas giant’s board.

Daniel Rice has so far excluded himself from the quarrel as he currently sits on the EQT board, which he joined following the close of the merger.

The lawsuit filed against EQT and its board on April 25 alleges EQT is attempting to create an uneven playing field by requiring, as a condition of the submission of nominations, that the Rice team’s nominees consent to being named in EQT’s proxy materials.

The Rice team believes that there is no such requirement in EQT’s bylaws and that any such requirement would violate Pennsylvania law. Further, Rice called the move a coercive tactic by EQT designed to preserve the incumbent directors’ majority control of EQT by creating the deceptive appearance that the Rice team’s nominees support the incumbents.

“We believe both sides agreeing to use a universal proxy card would reflect best-in-class corporate governance, as the most qualified directors would be elected regardless of which proxy card a shareholder voted on,” Toby Rice said in a statement on April 25.

The Rice team slate consists of nine independent nominees and includes both Daniel and Toby Rice.

In an interview with Reuters, EQT CEO Rob McNally insisted there was no attempt by the board of the company to manipulate the nomination process, and said it would file its preliminary proxy material in the “next few weeks.”

McNally told Reuters the Rice lawsuit was timed to distract the market from EQT’s first-quarter earnings released earlier April 25, which he described as “a good set of results from the company.”

Over the last two quarters, EQT said in a company statement on April 25 it has generated more than $300 million in adjusted free cash flow.

“The company’s outstanding financial and operational performance demonstrates that it is on track to achieve the ambitious free cash flow targets set out in January. ... Management continues to be laser-focused on turning EQT into a free cash flow machine,” the company statement said.

The election for the EQT board of directors will take place at the company’s annual meeting on July 10. Goldman Sachs & Co. LLC is financial adviser to EQT and Wachtell, Lipton, Rosen & Katz is serving as its legal counsel.

The company had previously said it expected the plan to be approved in the summer of 2019.

Jointly controlled by Norwegian billionaire Kjell Inge Roekke and Britain’s BP Plc, Aker BP was set up in 2016 to focus on oil and gas exploration and production from Norway’s continental shelf.