Recent field applications have confirmed that use of wellbore shielding technology in lieu of calcium carbonate (CaCO3) can substantially reduce formation damage and increase production in weak and structurally complex reservoir geologies.

Wellbore shielding technology comprises an ultra low invasion additive that creates a strong but thin seal that reduces fluid invasion and maintains wellbore stability even under high differential pressures. The technology, which performs the same sealing objective as CaCO3 but with reduced formation damage and improved production, challenges conventionally held wisdom that weighting and bridging agents used in reservoir drill-in (RDF) or completion fluids must be completely acid-soluble to minimize production-restricting skin.

The technology is typically incorporated in the RDF or completion fluid system in concentrations that represent only 2% to 2.6% (based on 7 pounds per barrel [ppb] in a 12-lb/gal RDF) of the total solids content. Though not entirely acid-soluble, the wellbore shielding agent deposits an impermeable barrier that effectively shields solids invasion to minimize formation damage during the drill-in process. In most cases the thin filter cake simply lifts off with the initiation of production, requiring negligible differential pressure. Since acid cleanup usually is not required to remove the cake and near-well solids invasion, both costs and time to first production are reduced appreciably.

Third-party return permeability studies confirm the use of shielding technology to minimize formation damage. The most striking results were seen in Venezuela, where the addition of 7 lb/bbl of the wellbore shielding additive in a 12.5-lb/gal oil-based RDF reduced the damage ratio to 4.5% compared to the pretreatment damage ratio of 64.3%. 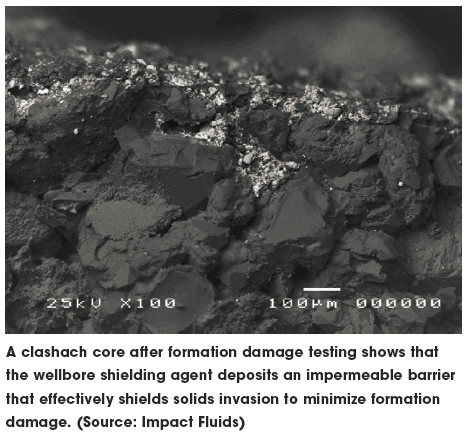 Formation damage studies using wellbore shielding technology challenge the widely accepted concept that any additive used in a RDF or completion fluid must be 100% soluble in hydrochloric acid (HCl). The use of HCl is commonplace to clean up the well and remediate damage caused by the invasion of drilling solids in the formation. That conventional thinking has long made CaCO3 the weighting and bridging agent of choice for drilling the reservoir, where it displaces altogether insoluble barite.

Evidence is mounting, however, that the benefits of CaCO3 (maximum 98% acid solubility) are offset by the comparatively higher volumes required and its rapid degradation under the shearing forces generated while pumping the fluid. Compared to conventional API barite, which has a 4.2 specific gravity (SG), building a 12-lb/gal drilling or completion fluid system with CaCO3 (2.6 SG), for instance, requires nearly 40% more solids volume.

As CaCO3 is an extremely soft mineral, degradation is swift, with micron-sized reductions of a considerable portion of the total volume, often after only one or two circulations (Table 1). Thus, not only are the particles rendered incapable of plugging reservoir permeability, but the smaller material is now capable of invading much further in the reservoir, which can be inaccessible to acid cleanup, thereby increasing the risk of possibly irreparable formation damage. More recently, Yang (2015) used sensitive focused-beam reflectance measurement techniques, reliable laser diffraction and sophisticated image analysis to conclude that size degradation of CaCO3 occurs at a much lower shearing rate and to a considerably larger extent than previously assumed. The study, therefore, called into question the use of CaCO3 alone in applications requiring strict maintenance of precise particle sizes.

The case for wellbore shielding

Wellbore shielding addresses the drawbacks inherent in CaCO3 as a solution for sealing weak formations and loss zones. The technology comprises a proprietary blend of cellulosic and other materials to form small and deformable particles in the fluid system that create an extremely low-permeability barrier at the fluid-rock interface. Unlike traditional plugging solutions, the shielding additive effectively minimizes fluid and pressure invasion across a broad range of permeabilities, preventing entrained solids from invading matrix pores and microfractures (natural or induced) up to 3,000 microns.

The resulting “shield” stabilizes mechanically weak zones and reduces the risks of differential sticking while mitigating whole mud losses deep into the reservoir. Acidizing deep invasion becomes even more problematic with fluid densities of 10 lb/gal or higher, with acid depletion accelerating as it enters the formation.

Owing to the minimal concentrations required in an RDF formulation (as low as 4 ppb), only a small percentage of the filter cake becomes insoluble. Specifically, if the mud remained homogeneous when the cake was deposited, the insoluble component would generally represent only 1% to 2% of the total dissolvable material.

The wellbore shielding additive, which is fully compatible and used effectively in combination with CaCO3 systems, is partially acid-soluble, the extent of which increases in proportion to bottomhole temperature. At 100 C (212 F), 55% of the total content is soluble, increasing to 63% at 121 C (250 F). Consequently, the total insoluble solids content quickly becomes a moot point.

As illustrated in wells drilled in a highly depleted unconsolidated sandstone reservoir in Oman, the wellbore shielding technology eliminates, in some cases, the need for acid cleanup prior to the commencement of production. In this case the reservoir sections demanded strict control of equivalent circulating densities (ECDs) to minimize hydrostatic overbalance and prevent induced losses. The reservoir was drilled with a water-based RDF incorporating 30 ppb to 40 ppb of sized CaCO3, which not only increased ECD but experienced rapid degradation, restricting invasion control and optimal bridging, especially in larger pore sizes. While the CaCO3 particles were effectively dissolved with an acid wash, continued induced losses in several more pressure-depleted wells and higher fluid costs prompted the operator to seek an alternative.

The operator replaced CaCO3 with 6 ppb of the wellbore shielding agent. The result was a dramatic reduction in ECD and associated invasion without the added costs of an acid wash. After several wells, losses were reduced.

Wellbore shielding also has been used in CaCO3- weighted fluids to lower the overall solids concentration and reduce damage. In an onshore well in Germany potential instability in the upper Rotliegend sandstone reservoir required RDF density that would exceed the fracture gradients of the underlying and highly depleted Bunter sands. Typically, up to 76 ppb of conventional bridging materials had been used to partially seal the induced fractures and prevent losses. Mixing 6 ppb of the ultralow-invasion additive with 30 ppb CaCO3 allowed the reservoir to be drilled trouble-free to targeted depth with no losses.