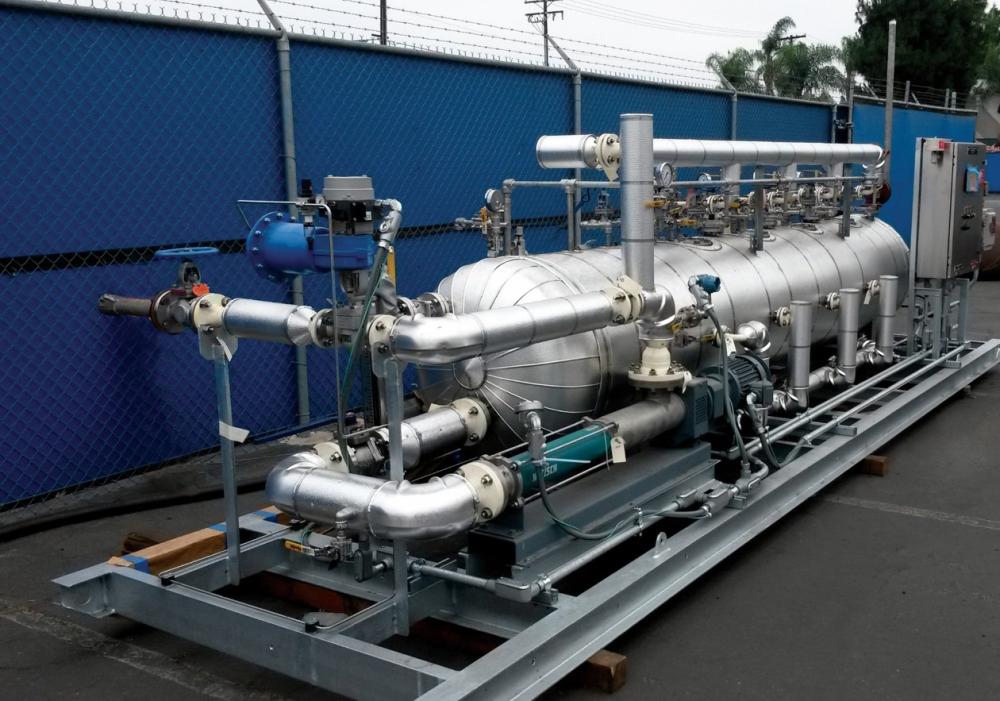 The horizontal design of the CoStrip degasifier is ideal for installations with height restrictions. (Source: Veolia Water Technologies)

Historically, removing dissolved gases, such as CO2, H2S, and benzene, toluene, ethylbenzene and xylene (BTEX) compounds, from polluted aqueous streams has been a challenge. Conventional degasification towers have proven to be inadequate. These towers use packed beds that are highly susceptible to plugging or fouling. In produced water applications, where the water contains high levels of suspended solids and oil, conventional technologies tend to fail.

A fouling-resistant gas stripping technology called CoStrip was tested as part of a pilot study for removing dissolved gas species from produced water in California. This technology from Veolia Water Technologies degases raw water by introducing microbubbles of a stripping gas counter-current to the liquid stream. The CoStrip technology eliminates the need for upstream treatment before degasification. Other benefits include safe operation of downstream equipment due to H2S reduction, corrosion mitigation on downstream equipment, and reduced downstream chemical consumption and sludge generation in a chemical softening application.

The CoStrip technology works by the principle of Henry’s Law, which states that at a constant temperature, the amount of a given gas that dissolves in a given type and volume of liquid is directly proportional to the partial pressure of the gas in equilibrium with the liquid.

The technology works as follows: Eductors use a liquid recycle stream within the unit to uptake and disperse fresh gas in a series of four separation cells. In each cell bubbles rise and maintain contact with the bulk liquid. Dissolved gases such as CO2, H2S and BTEX, which are present in the bulk liquid in each cell, migrate into the microbubbles as they rise. The mass transfer is driven by the disequilibrium of the dissolved gases present in the bulk phase and within the bubble. Once they are at the bulk liquid/gas interface, the microbubbles burst and release gas into the headspace. The gas in the headspace is continually swept out of the unit by the introduction of fresh gas. This provides a constant gas disequilibrium within the unit.

The combined off-gas is removed from the vessel and can be treated for reuse or disposed of appropriately. The stripping gas volume provides efficient mixing and high surface area contact with the fluid to displace undesirable dissolved gases. The technology removes benzene, toluene, ethylbenzene, CO2, H2S and various other dissolved gases, depending on the application.

Besides being fouling resistant, CoStrip technology offers other advantages in produced water applications. It can remove CO2, thus reducing alkali consumption and sludge generation in downstream chemical softening processes. By reducing the feed water alkalinity and CO2 concentrations, CoStrip results in the consumption of less hydrated lime and caustic soda and less calcium carbonate and magnesium hydroxide sludge. The technology can be used as a pretreatment step to reduce operating costs for water softening systems.

The CoStrip technology provides downstream benefits associated with H2S removal, such as reduced capital and operating costs. For example, by eliminating H2S, there is no need to cover downstream process tanks, which would otherwise be necessary to prevent odorous emissions and ensure personnel safety. Operating costs are reduced when the need for an oxidant to remove H2S is eliminated.

Produced water from a storage tank was fed to a CoStrip degasifier as part of a pilot study. A series of tests were conducted using air as the stripping gas. The produced water total dissolved solids, temperature and pH were approximately 12,000 mg/L, 71 C (160 F) and 6.8, respectively. 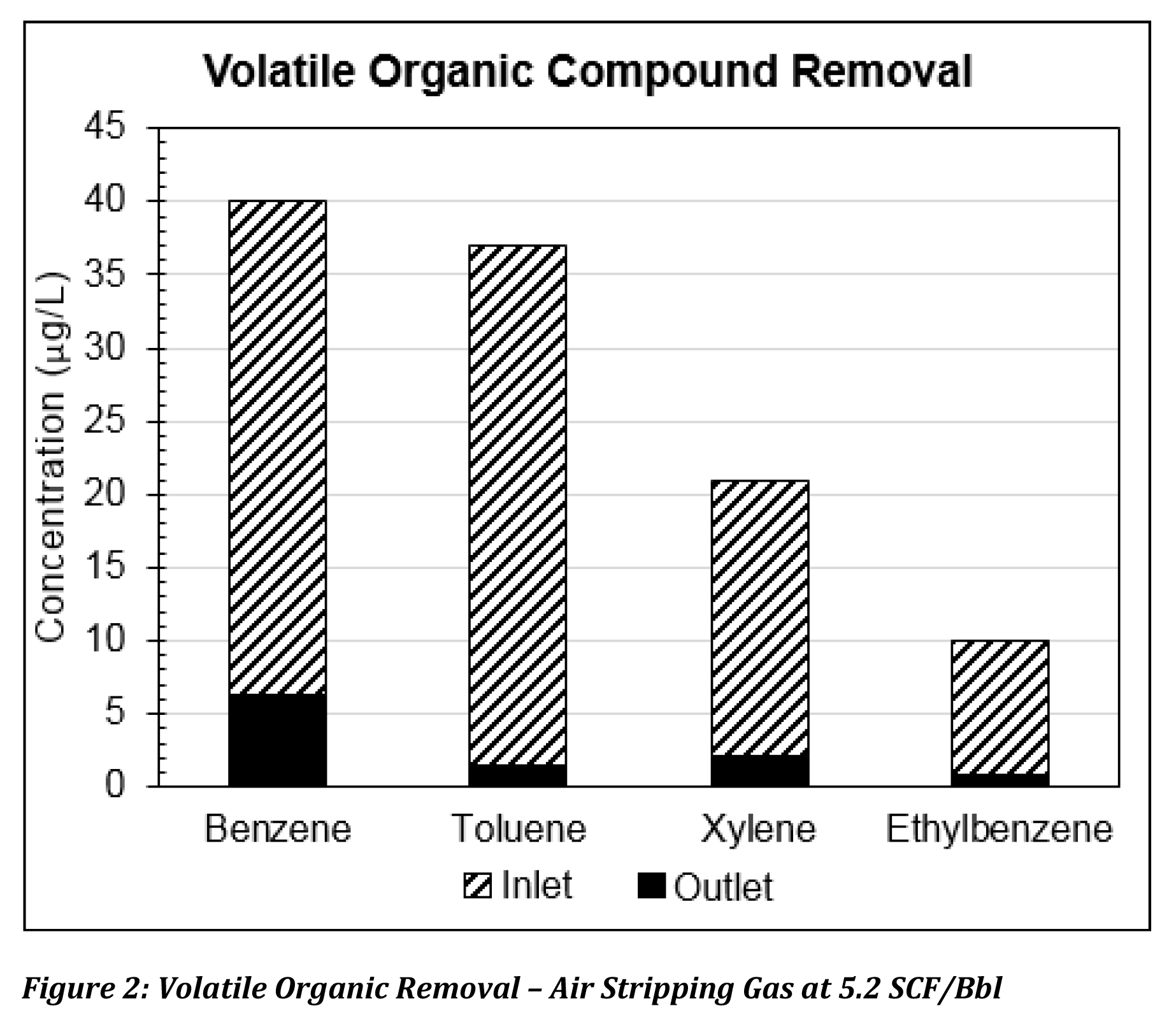 Tests also were performed using nitrogen as the stripping gas, and the nitrogen was found to perform similarly to air. At a stripping gas utilization rate of 5.2 Scf/bbl, the unit removed about 82% of benzene, 87% toluene, 88% xylenes and 91% ethylbenzene.

Under the same operating conditions, dissolved CO2 was reduced by 75% and H2S by 93%.

During the pilot test, calcium carbonate scaling was observed inside the degasifier. The scaling occurred because of the rise in pH between the unit’s inlet and outlet during the acid gas stripping. The solubility of calcium carbonate is inversely related to the pH. At lower pH, the salt is more soluble.

To minimize scale deposits in the unit, sulfuric acid was dosed into the degasifier to lower the scaling potential. Before acid introduction, scaling occurred quickly, at an LSI of about +1.5. After acid addition, the LSI was lowered to about +0.9. The acid injection minimized the rate of scaling in the degasifier, and scaling was not observed over several weeks.

Although nitrogen and air were the only stripping gases tested in this study, the type of stripping gas used is expected to have little impact on performance. As long as the stripping gas does not contain the dissolved gases to be removed, the disequilibrium between the dissolved gases in the rising microbubbles and the bulk liquid phase will be the same, according to Henry’s Law. The partition coefficient is independent of the other gas species present, and solely a function of the temperature and individual gas species.

Based on the pilot study results, the CoStrip degasifier provides many process benefits to a produced water treatment train. H2S is removed, thus ensuring personnel safety and minimizing environmental impacts and corrosion issues.

Fouling and degradation of downstream reverse osmosis membranes are reduced by minimizing VOCs.

The estimated economic benefits of using the CoStrip technology include up to 30% cost reductions on chemical softening and sludge disposal and up to 35% cost savings on reverse osmosis membrane replacement. Although these savings must be evaluated on a case-bycase basis, they translate into a payback period of less than one year when gas stripping technology is added to the treatment train.