For more than 100 years the horsehead-style pumpjack has dotted the oilpatch landscape, photographed repeatedly against the rising or setting sun. That image is a picturesque symbol of energy being extracted from the depths, ready to fuel progress in industry and transportation around the world.

Now, with the combination of horizontal drilling, the injection of tons of sand for fracturing and the production fluctuations inherent in freshly minted unconventional wells, that very progress is causing major issues for those tried-and-true workhorses.

Although traditional pumpjacks have been spectacularly reliable and efficient at producing vertical wells, they face big challenges with today’s horizontal holes. Pump placement in horizontal wells can increase the likelihood of gas locking. In a horizontal well, producers often land the pump at severe angles deep in the dogleg section above the perforations. Many times this leads to excessive gas locking or gas interference, depending on the distance of the pump intake from the perforations.

Additionally, fracture sand and debris from the formation can clog the traveling and standing valves or accumulate in the pump. Gas locking or sand issues can contribute to loss of pump efficiency and decreased production. In a traditional pumpjack sand issues often require a workover, adding to costs and bringing production to a complete halt.

If the stroke could be shortened for a few hours, debris and sand loading could potentially rectify itself. But adjusting stroke length on a pumpjack involves a mechanical change at the site, which would then have to be undone once the problem resolves.

Even with remote monitoring on pumpjacks, operators may detect problems such as gas locking or sand/ debris loading, but the only remedy is still an onsite visit to a location that may be very hard to reach. Remote control on a gas-driven pumpjack only turns the unit off or on, while an AC prime mover with a variable frequency drive can make some changes in stroke speed. With a hydraulic pumping unit, all changes can be made regardless of whether it is powered by gas or AC.

This situation is one in which a hydraulic pumping unit with a full suite of remote monitoring and control software can save an operator thousands of dollars in lost production and avoid workover costs. Hydraulic pumpjacks use the prime mover to pressure up hydraulic oil, which is then manipulated as needed to control the movement of a hydraulic cylinder that moves the rodstring.

This gives much more precise control over the pumping action, allowing adjustments in speed, stroke length, rodstring acceleration/deceleration and even dwell times at the top and bottom of the stroke to reduce stress on the rodstring.

Zedi entered the hydraulic rod pumping business in 2011 when it connected with a company that made a basic version of these units for small- to medium-sized wells. Since then Zedi has expanded the product offering to accommodate a full range of wells from low to high producers. Zedi also integrated its remote monitoring, control and optimization technologies to create a complete hydraulics-based rod pumping solution. Now with several years of well data across hundreds of wells it can identify and resolve (in many cases remotely) issues common to rod pumping.

In their elemental form, hydraulic rod pumping units have unique capabilities for optimizing wells. However, coupled with the latest technology for data collection and analysis they create a powerful tool that is particularly useful for addressing the unique production challenges of hydraulically fractured horizontal wells.

Accumulations of sand and debris

One example of the benefits of remote monitoring and control is in the case of sand/debris accumulations in the pump. When the pump is installed at an angle, sand may collect in the bottom of the pump in a way that interferes with the valves. If the accumulation continues, the pump can hit sand before reaching the bottom of the stroke. This can compress the rodstring. On the pump card this appears as a tap, but the problem is actually inside the pump instead of being located on top of the pump as in most cases.

To determine the presence of any problem, the well must be monitored long enough to establish baseline parameters such as peak and minimum polish rod loads. Once those are established, alarms can be set to alert operators of a potential issue.

In Figure 1 the normal minimum rod load was established at 2,500 lb, so the low alarm was set at 2,300 lb. The alarm is set to ignore an occasional trespass but to note when the alarm level is starting to trend, as evidenced in the circled area in the lower left corner of the left chart. This reveals bottom tapping due to debris at the bottom of the pump barrel. In this example, the minimum load dropped at the 10-in. mark. 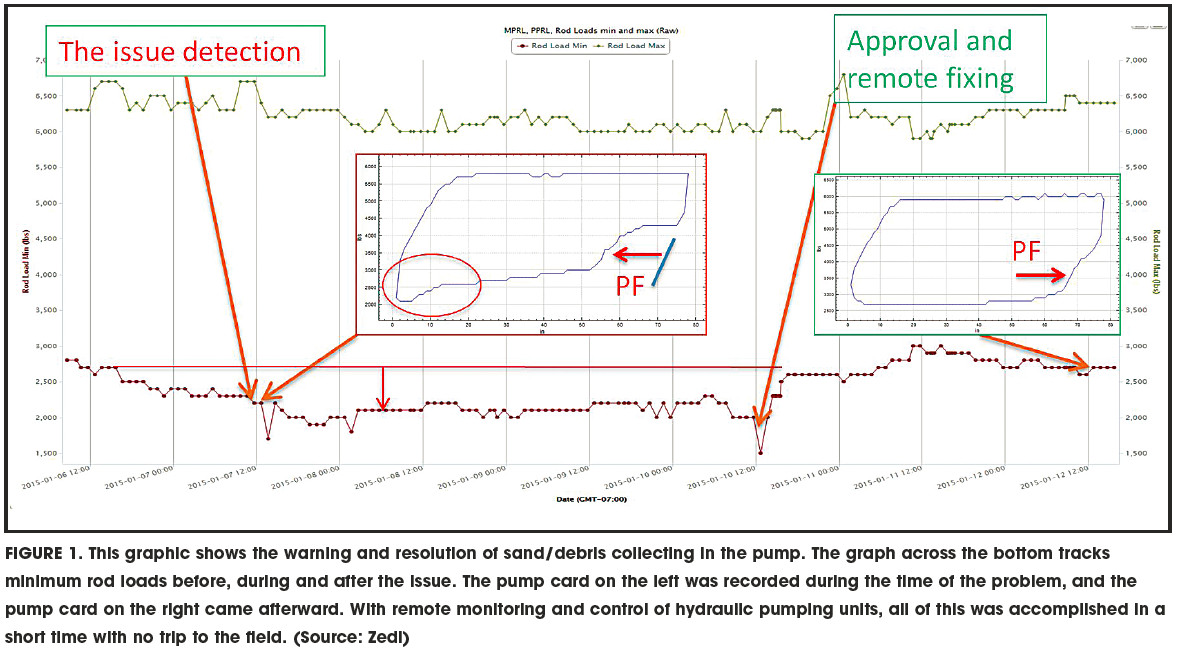 The main thing to avoid is allowing the pump to compact the sand to the point where it can only be removed by a workover. With the remote control capabilities of a hydraulic pumping unit, operators can raise the bottom position—to 15 in. in this example—for a period of time. When the pump no longer pounds the sand/debris, that debris can become a slurry to the point of frothing, so it can be flushed out by the production fluid.

The operator can test to see if the debris has been removed by lowering the bottom position in small increments while monitoring the updated well data. All of this happens without a trip to site in most cases. The chart on the right in Figure 1 shows the well returning to normal after the sand and debris were cleared. Quick detection and response avoids equipment damage and a drop in production.

The solution in this case is an increase in stroke ratio to create a faster downstroke. The goal is to have as much compression as possible in the main chamber. Although this has been shown to work well in the field, the exact mechanism is under debate as to whether it’s the higher compression or the vibration caused by the change in rodstring and plunger speed.

The circle marked “2” on Figure 2 shows the resolution, which was slightly delayed due to technicians waiting for approval from the operator. 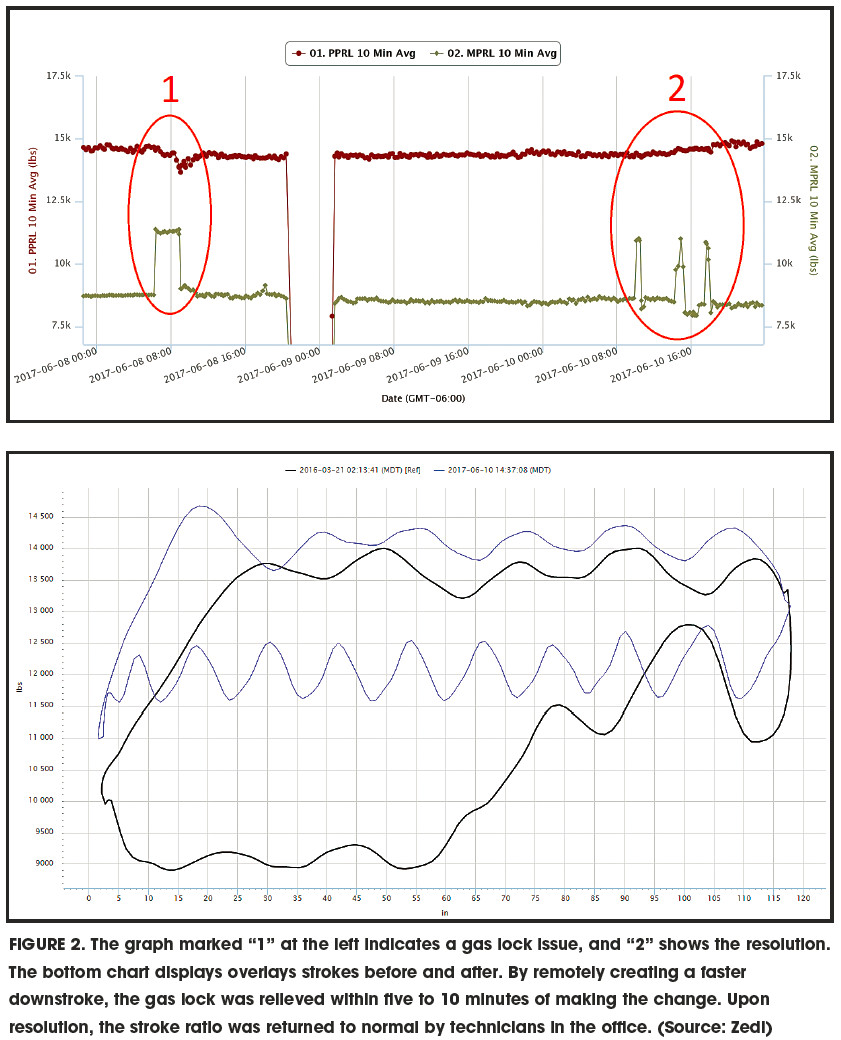 With the remote monitoring capabilities technicians were notified of the gas locking situation within 15 minutes of its initial occurrence and, even with a slight delay in approval, had the problem resolved 20 minutes later, without a site visit. This avoided production loss.

An increasing number of operators are using remote monitoring to eliminate unnecessary trips to well sites. With the addition of alarming by exception and remote control, the unique optimization capabilities of hydraulic pumping units can also help reduce operating costs by avoiding expensive workovers and minimizing downtime.