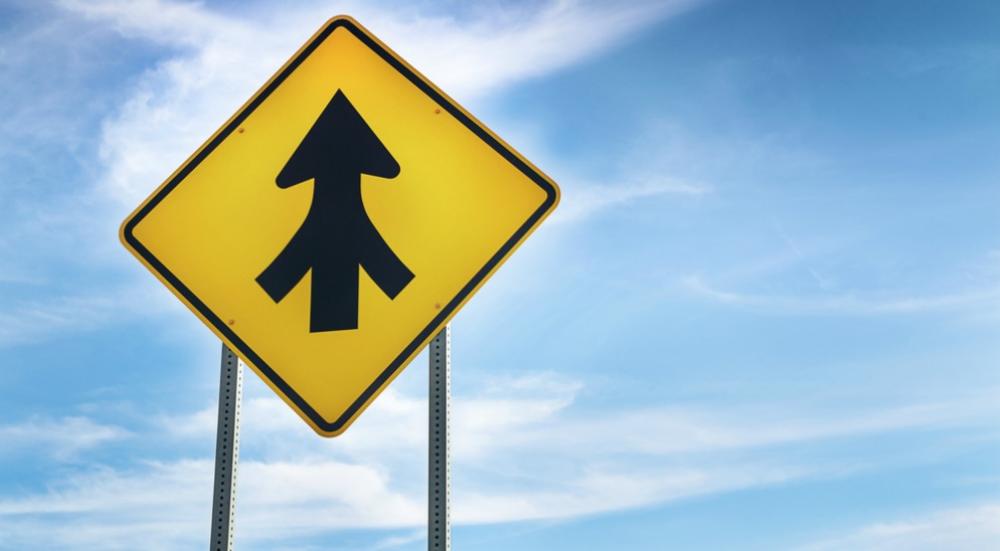 North American proppant suppliers could be on the path of a shakeup if commodity prices keep shale operators from fracking more wells.

The proppant market is currently swimming in a surplus of product. Concurrently, demand continues to drop due to reduced drilling and completions activity among operators. This strain will likely lead to more M&A activity in the proppant market in the near future, said Samir Nangia, managing director of PacWest Consulting Partners, an IHS company.

However, Nangia said one bright spot remains for the North American proppant market: the trend of operators saving money by boosting frack sand per well.

Frack sand makes up for 95% of proppant use, which also includes resin-coated sand and ceramics. The Eagle Ford, Permian Basin and Appalachia account for 69% of total frack sand demand in the North American market in 2015. Canada composes 8% of the market.

The demand for frack sand is set to decrease by 21% in 2015. Overall proppant consumption in North America will also decrease by 23% in 2015, followed by gradual recovery in-line with oil prices and drilling and completions activity.

Meanwhile, proppant supply, especially frack sand, has remained strong, resulting in a current weak price environment. PacWest forecasts that proppant prices will decline by 9% per annum over the next three years. 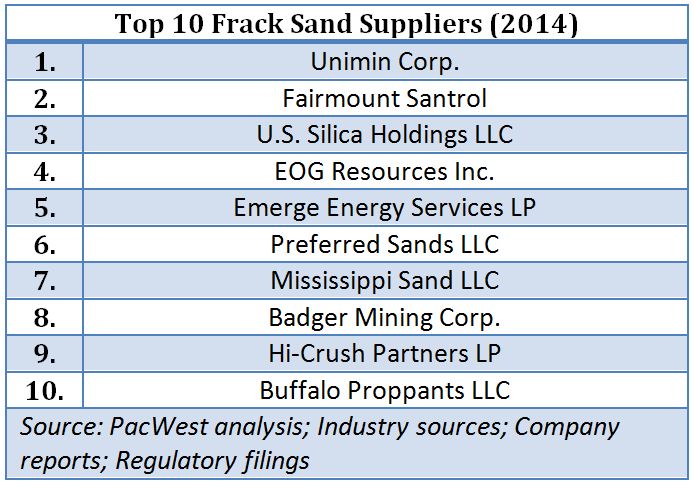 Due to the price environment, Nangia said he expects M&A activity in the sand supplier market to heat up.

The current frack sand supplier landscape is barely consolidated, he said. The top 10 sand suppliers account for 55% of total capacity, while more than 40 companies make up the remaining percentage.

According to PacWest, EOG Resources Inc. (EOG) is the fourth largest sand supplier by capacity. The Houston company’s sand operations in Texas and Wisconsin satisfy the majority of its internal demand.

“We do see a lot of consolidation going on in the industry, and as a result many of these smaller mines could either be close or consolidated by the top producers,” he said.

Several large deals have already dropped within the past year.

Also in 2014, KKR & Co. LP acquired Preferred Sands LLC, a large producer of sand and resin-coated proppant in North America, through a recapitalization deal worth $680 million.

Over the trailing four quarters, frack sand consumption per horizontal well has increased 15%.

“This could be as a result of some recent trends in frack design in general which tend to favor higher proppant mass per foot, and obviously sand is the cheapest for that,” Nangia said.

Turning toward using more frack sand per horizontal well may be the answer for some operators to stay on budget.

Operators have leaned hard on service providers to reduce costs and are using the opportunity to add more sand to horizontal wells, particularly in the upper Woodford Shale, according to a recent Hart Energy Market Intelligence Series report. 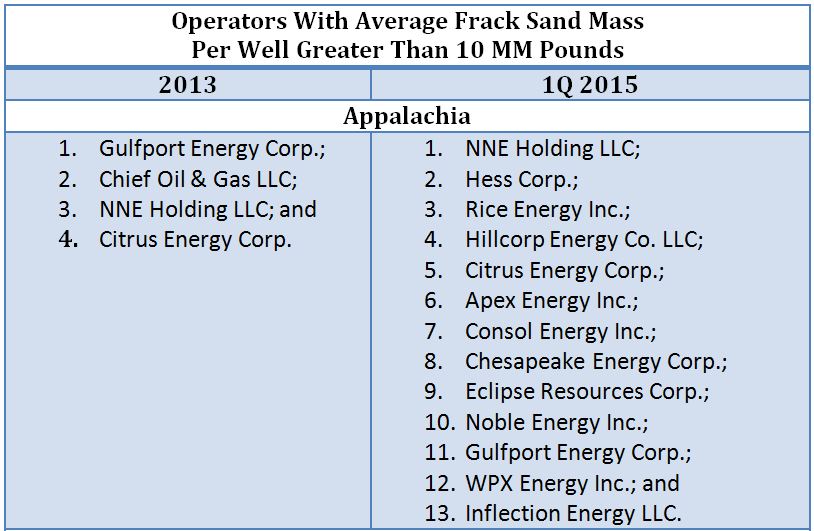 For example, Midcontinent operators have been ramping up use of sand per well as low commodity prices reinforce a transition in completions to massive slickwater treatment, another recent Hart Energy Market Intelligence Series report said.

Metrics on stage spacing, number of stages and fracture stimulation technique have not changed during the downturn. Rather, operators in the region have started taking advantage of the low service costs to extend lateral lengths and increase the volume of proppant downhole.

The average proppant use among survey respondents in the Woodford Shale was 10 million pounds per well vs. 7.7 million pounds at the beginning of the year.

In some cases, E&Ps have shifted toward fracking wells exclusively with sand, Nangia said. 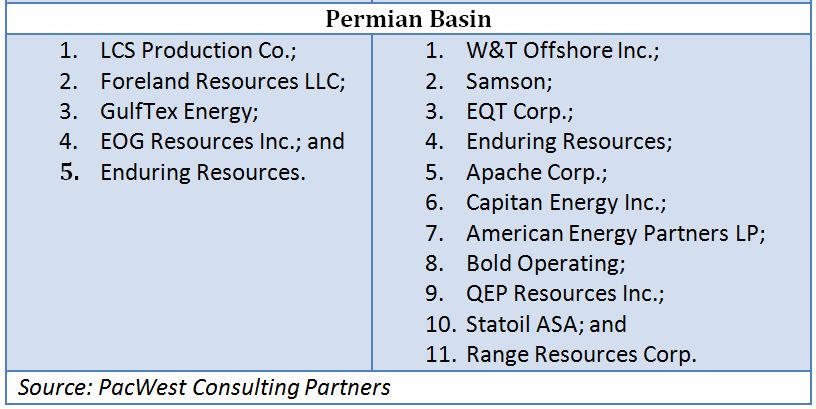 While companies stay focused on cutting costs, the percentage of wells using sand only will likely continue to increase, Nangia said.

Already the average amount of frack sand used for a horizontal well has grown across the U.S., driven by increasing well sizes in the Bakken, Permian Basin, Eagle Ford and Appalachia.

During the past year, sand intensity in the Eagle Ford grew by 25% and in Appalachia by 19%. The increase is less in the Bakken with 7% and also in the Permian with 10%.

In the Eagle Ford, the top five operators used about 11 million pounds of sand per well vs. 6 million for other operators, which is six times the average well size today, he said.

The number of operators who are use a higher amount of frack sand per well has also increased. For example, there were only four operators in the Marcellus and Utica shales who used more than 10 million pounds of frack sand for a horizontal well in 2013. Today, that number has jumped to about 12-13 operators.

“Even though we’ve seen mass per well go up significantly—as I mentioned 15% over the last four quarters and the trend continues to be up—there could be some more room to go up if more E&Ps adopt this greater mass per well paradigm,” Nangia said. 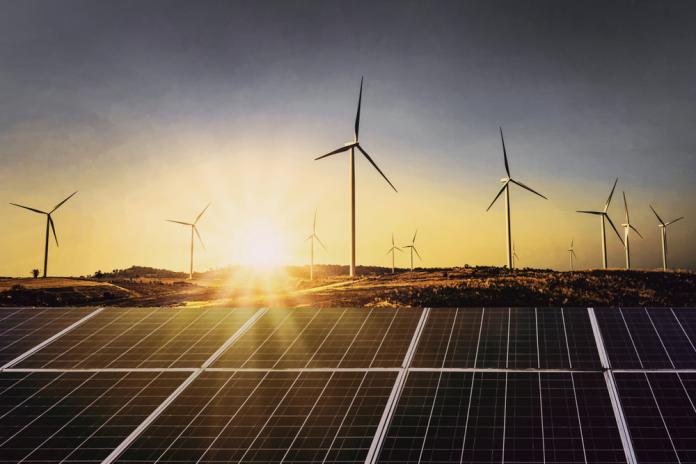 The questions now focus on how to deal with additional transmission buildout and battery ownership. 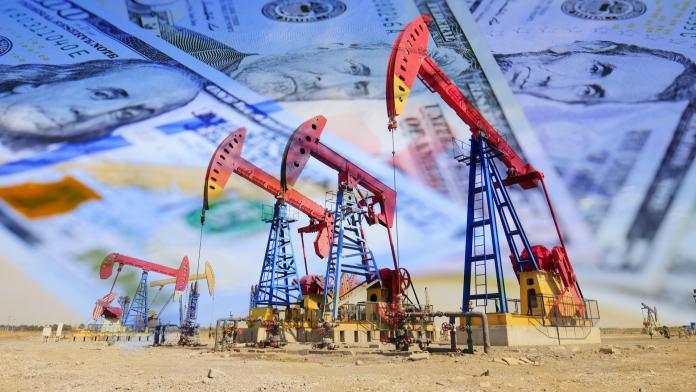 Jamie Webster, senior director for Boston Consulting Group, said during EIA International Energy Outlook 2019 nations like the U.S. will be able to levy targeted sanctions without it affecting the global market. Here’s why. 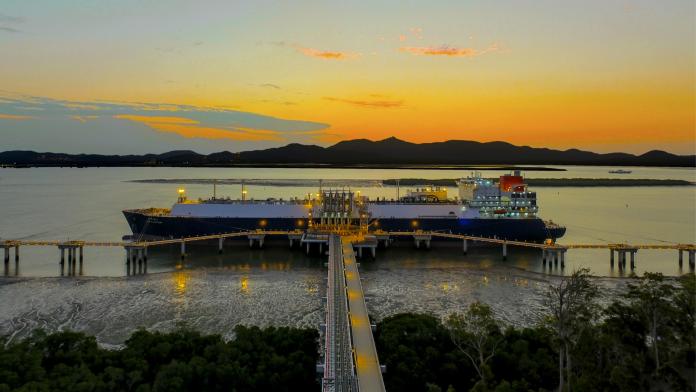 Will the midstream sector over-correct the first wave by overbuilding to deal with the anticipated LNG export demands?