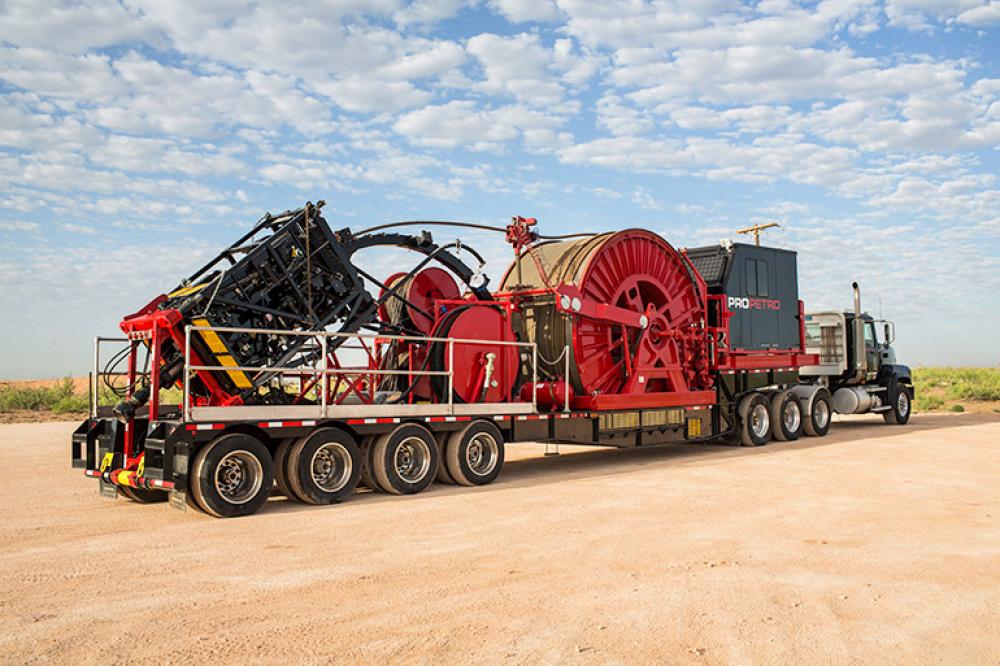 The ProPetro coiled tubing units are among the deepest capacity units in service in the U.S. today, STEP said in a release. (Source: ProPetro Holding Corp.)

ProPetro said in a release that it elected to receive consideration in the form of cash and shares in STEP, reflecting ProPetro’s confidence in STEP’s ability to grow the business and create value.

“STEP is a leader in the coiled-tubing market, with a proven track record of growth and ability to bring new technologies to market,” ProPetro CEO Sam Sledge commented in the company release.

“As part of STEP,” Sledge continued, “the assets will have the appropriate scale to effectively compete and achieve their full potential. We are grateful for the contributions of our teammates who supported this business over the past several years, and are pleased that they will have the opportunity to transition to STEP, which shares our dedication to customers, and focus on operating safely, efficiently and effectively.”

The ProPetro coiled tubing units are among the deepest capacity units in service in the U.S. today, STEP said in a separate release.

“We have tremendous respect for the coiled tubing business that the ProPetro team has built,” Steve Glanville, STEP’s president and COO, added in the release.

The Calgary, Alberta-based company’s U.S. subsidiary, STEP Energy Services (USA) Ltd., acquired the four high-spec, ultradeep capacity coiled tubing units, ancillary equipment along with the divisional leadership and operational personnel from ProPetro. The acquisition, according to the company, solidifies STEP as North America’s leading provider of deep capacity coiled tubing services, with a large footprint and deep expertise in the Permian Basin and other oil and gas producing areas in the southern U.S.

The ProPetro coiled tubing units were manufactured within the last four years and are capable of handling 30,000 ft of 2-3/8 inch and 2-5/8 inch strings of coiled tubing.

Three units are currently crewed and active with leading Permian E&P companies while the fourth requires minor capital upgrades prior to deployment, which is expected in 2023. These units and their crews have a very strong reputation in the field and are primarily used to drill out plugs in complex, extended lateral wells.

“Lateral lengths in the Permian continue to increase and these four units, along with the highly skilled team of professionals who operate the equipment, build on STEP’s ability to service this market segment,” Glanville said. “Furthermore, the outlook for the coiled tubing market is improving rapidly as smaller competitors are consolidated and pricing moves higher.”

STEP funded the ProPetro coiled tubing acquisition by a combination of $2.77 million in cash and the issuance of roughly 2.6 million STEP common shares at a deemed price of $5.204 per share, calculated using the 30 day volume weighted average price of STEP common shares ending Aug. 26.

Based on current market dynamics, STEP expects cash flow generated from the acquisition to pay back the company’s initial investment in 18 to 24 months.

“We are excited about how this acquisition will drive higher returns from our U.S. division,” Glanville said.

Indonesia Offers Four Blocks in Second Bidding Round This Year

2022-11-23 - The four blocks offered in the second round of bidding this year have combined estimated resources of 3,730 million barrels of oil and 300 Bcf gas, Indonesia’s energy ministry data showed.