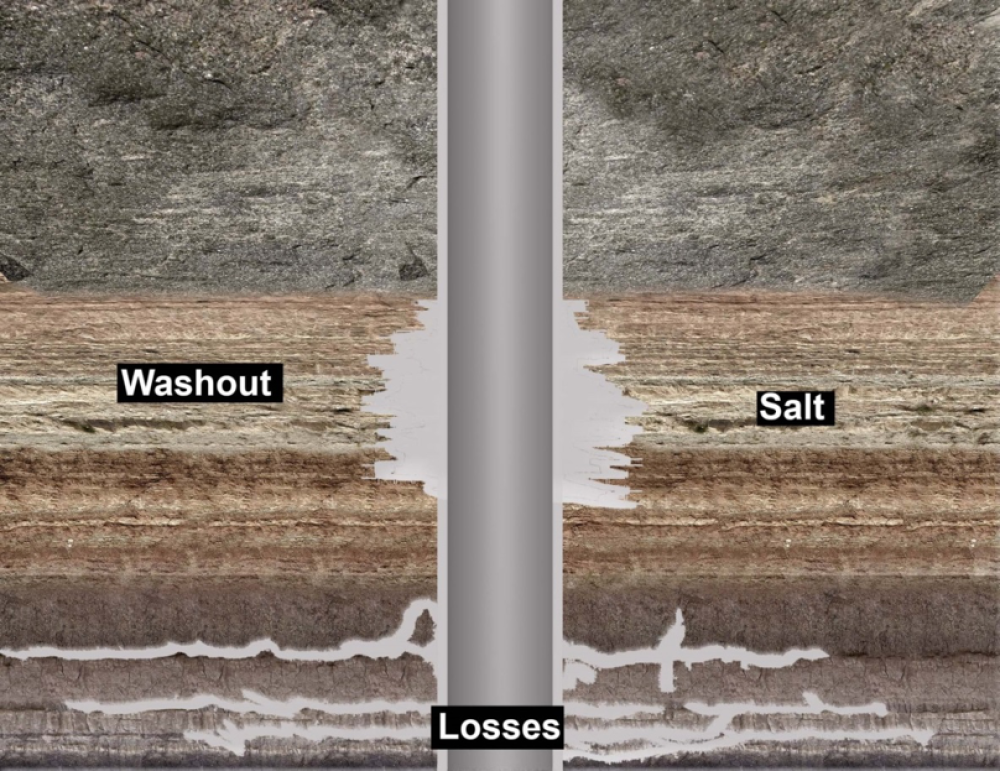 FIGURE 1. Dissolving salt and sensitive loss zones below the salt hinder density control of the drilling mud and the establishment of a good primary cement job. (Source: Halliburton)

Overlying much of the hydrocarbon-rich Delaware Basin is a thick evaporite sequence that poses a significant challenge for wellbore integrity. Conventional water- and brine-based drilling fluids promote severe wellbore washout and require high dump and dilution rates due to salt leaching when drilling through the evaporites. Lost fluid circulation below the evaporite formation due to a reduced fracture gradient is an additional drilling hazard (Figure 1).

Many operators attempt to minimize borehole enlargement by drilling salt sections with a saturated brine fluid. After drilling the salt section two options remain: 1) set casing to isolate the salt and minimize the risk of excessive overbalance in the loss zones below, or 2) drill ahead and try to control mud density with dilution.

In the first option, the capital cost for a salt casing string is about $150,000 per well. At least one day is required to run and cement casing, plus the cost of the cement job must be factored into the decision. This added salt string also can restrict the final borehole diameter in the pay zone.

For the second option, drilling ahead and beyond the exposed salt leads to a compromise between washout and lost circulation risk. The drilling fluid must be diluted and the salt content reduced below saturation to stay under 10 ppg and avoid lost circulation. However, the unsaturated fluid will then continually dissolve salt from the wellbore, and the resulting density increase must be corrected by dump and dilution. The waste volumes generated by this approach sharply increase haul-off and disposal costs as well as add to already congested roadways.

Once the intermediate interval has been drilled and cased, most operators displace to a nonaqueous fluid (NAF) to drill the curve and lateral sections. Although the displacement takes 4 to 8 hours of rig time, and the cost per barrel for NAF is comparatively high, the drilling performance outcomes make it the preferred choice. These systems deliver reliable wellbore stability, good lubricity and fast ROP. If properly managed with efficient solids control equipment, a NAF can be reused on subsequent wells.

Despite the challenges and expense of coping with salt and losses in the intermediate section, the combination of using a brine-based fluid and displacing to a NAF has been widely implemented among Permian Basin operators. Any alternative fluid system would need to be suitable to drill both the intermediate and lateral sections, stabilize salt (and eliminate the salt casing string), produce a near-gauge borehole, offer sustained low density without excessive dilution and clean up easily for reuse on additional wells.

A new low-solids, brine-based drilling fluid was first implemented in the Delaware Basin in May 2017. The formulation addressed known drilling issues by tightly combining the brine-based fluid with low-density oil to form a stable direct emulsion. The increased oil content (10% to 50%) lowered density, allowing the fluid to remain fully salt-saturated to suppress salt washout while preventing lost circulation in weak zones.

Since its introduction, the direct-emulsion fluid has been used on more than 60 wells, with an average savings of $200,000 per well. The fluid also was used to successfully drill eight lateral sections and enabled a better cement bond compared to those drilled with a NAF.

The cost benefits are derived from numerous improvements in efficiency:

FIGURE 2. Salt cuttings are visible on the shaker screen, indicating the integrity of salt formations throughout drilling operations. (Source: Halliburton)

This system is a direct emulsion, where the base brine is tightly emulsified with up to 50% diesel (7 ppg). The saturated brine phase of the fluid helps minimize washout, and the diesel phase delivers excellent density control without generating dilution waste volumes. By contrast, most NAF systems have an oil content exceeding 55%.

Formulation of the direct-emulsion system with produced water, an otherwise useless byproduct of oil production, keeps costs low. A barrel of produced water can be acquired for less than a $1/bbl, as opposed to trucking in a barrel of commercial brine (up to $27/bbl). Few other products are required, and the system is easy to mix on the fly at the rig site.

One critical element to the success of the fluid is a tight and lasting emulsion. Figure 3 shows a mud sample 2½ months after initial mixing, and the emulsion remained strong. As a further advantage, the system can be purposely de-emulsified so the diesel can be used in another drilling fluid as needed.

The formulation was tested extensively and optimized to ensure the new system would function well in a large-scale operation with high volumes and fast drilling rates. Compatibility testing was performed to prevent destabilization due to exposure to wellbore fluids and to confirm the fluid would not damage tool components.

The final formulation, as implemented in the field, was a salt-saturated, diesel-emulsion fluid with a density range of 8.6 ppg to 9.8 ppg. Rheological properties were relatively low. Equivalent circulating density and surge/swab pressures have been minimal.

The direct-emulsion fluid actively demonstrates significant improvements in borehole quality, along with a dramatic reduction in lost circulation events and fluid waste volumes. The new fluid has proven durable enough for continual reuse, like a NAF system. It can be used to drill all wells on a pad and then be moved to the next location. Since its first application more than one year ago, the fluid has consistently prevented leaching of the evaporitic salt layers, maintained near-gauge borehole conditions and removed the need for continuous fluid dilution and dumping. It has facilitated rapid and easy adjustment of low fluid densities, enabling successful drilling of formations with very low fracture gradients.