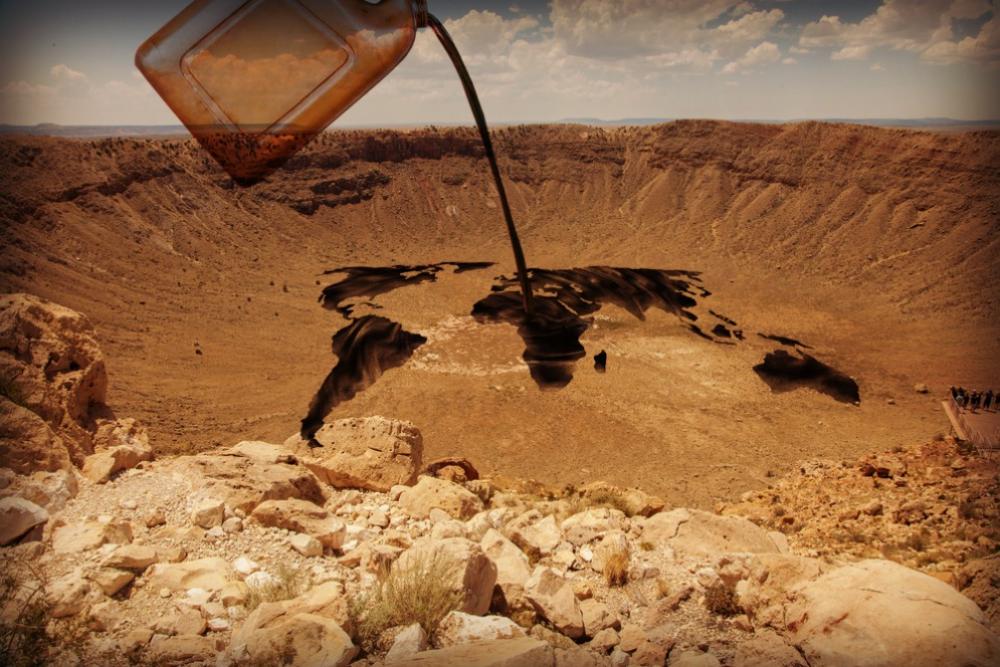 At sustained $40 oil prices, companies will start to consolidate, even within the Permian Basin. The Bakken, Niobrara and to a lesser extent the Eagle Ford will be back where they started two years ago—in downturn purgatory. And the world’s lowest-cost suppliers will become dominant producers.

Underlying those various effects is what Sheffield believes is the recent cause of oil prices dropping like dead weight the past three weeks—shale production.

“In my opinion, the market does not want the U.S. to start growing [production] again,” Sheffield said. “There’s too much inventory.”

Sheffield firmly sees the Permian as immune, to a large, extent, from those pressures. Even during the downturn, the basin’s oil production essentially ignored oil prices.

“Regardless of the collapse, it kept going,” he said.

Too Big To Buy 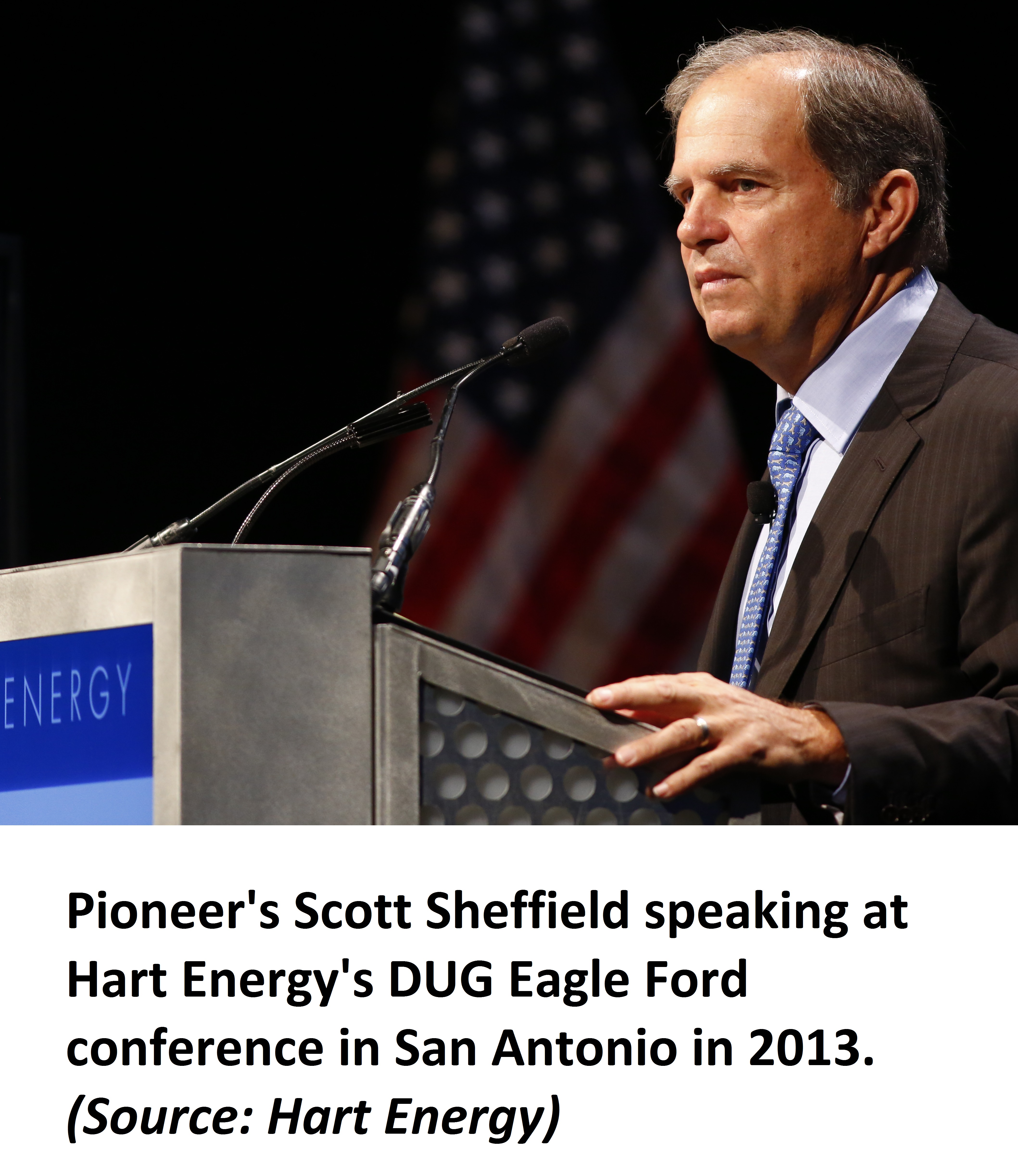 “If we’re entering a period of lower prices like in the lower $40s it will eventually lead to consolidation,” he said. “Most of the big deals have been done in the Permian Basin. There’s not a lot of land deals, asset deals. So you have to start doing companies.”

Should market forces tamp down U.S. production to 500,000 barrels per day (bbl/d), “we’re going to go into a period of consolidation over the next two years,” he said.

Sheffield brushed aside speculation that Pioneer might be a target by a supermajor such as ExxonMobil Corp. (NYSE: XOM) or Chevron Corp. (NYSE: CVX).

“I tell our employees we’re too expensive. They can’t afford to buy us,” he said. “That doesn’t mean it may not happen at some point, but Exxon and Chevron are buying assets.”

Buying from private companies owned by independents such as the Bass family also make more sense vs. “paying a big premium for a public company,” he said.

Still, with price volatility seemingly the order of the day, companies have to be hedged. In the immediate term, most companies are covered.

“Very few people are hedged in 2018,” Sheffield said. “So if prices stay where [they are] I see budgets getting cut.”

Despite the resurgence of the Eagle Ford, Sheffield sees trouble there, too.

While he’s been surprised by the turnaround the Eagle Ford over the past few months—EIA data suggests growth up by 40,000 bbl/d—the reason is tied to Sheffield’s favorite basin.

“The Eagle Ford was initially drilled on 5,000 ft [laterals]” but has increased lengths to up to 9,000 ft and poured on the sand—just as the Permian did during its growth period.

Still, at $40 oil prices, the Eagle Ford will decline again.

“You cannot make a lot of money at $40 oil in the Eagle Ford,” Sheffield said.

The Permian is insulated from such low prices because costs are so low.

“It takes $8 to $10 to find it and $4 to operate it,” Sheffield said, adding that overhead and debt make breakevens range between $22 and $28 per barrel. “That’s why there’s still a lot of activity today with oil moving down to about $43 a barrel.”

While OPEC is intent on prices returning to $60—partially to support Saudi Aramco’s IPO—Sheffield doubts oil will regain so much ground before 2020.

“It’s not going to get [there] with normal supply-demand characteristics because U.S. shale has taken off again,” he said.

Sheffield said the U.S. will likely have to help the Saudis reduce inventory.

“If they choose not to do it themselves through additional cuts, the U.S. producer will have to contribute. That’s what’s happening now,” he said, adding it may take up to a year for inventories to come down.

While that happens, low-cost operators—Saudi Arabia, Kuwait, Iraq, Iran and the Permian—will supply the world

But a larger question remains about the world’s supply needs. Sheffield speculated over whether exploration, deepwater drilling and oil sands will be needed.

Sheffield, who serves on Columbia University's Center on Global Energy Policy, said he is helping lead a new study on peak oil demand as advancements by Tesla and other companies expand market share.

Sheffield said the industry needs to know how many electric and self-driving cars will be on the road in the next decade.

Previous energy demand studies need to adjust for new technologies and take a "bit different approach," he said. How world energy use is changing will have a "major impact on deep water, oil sands [and] tar sands in Venezuela." 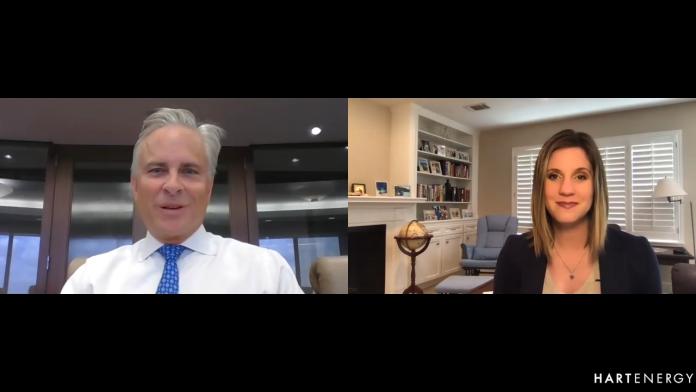