Hart Energy’s Stratas Advisors saw the Permian Basin as a land of opportunity for midstream operators in its second-quarter 2018 report. The big play’s growth in crude and associated natural gas production has pushed the limits of existing infrastructure to such an extent that the basin’s prices are lower than in other plays.

In August, the Permian’s central Waha Hub saw gas prices at $1 per million British thermal units below the benchmark Henry Hub in South Louisiana. Prices for Permian crudes have sagged, as well.

“The magnitude of pending production increases, the width of the differentials between in-basin pricing and elsewhere, and the play’s proximity to key markets like the Gulf Coast and Cushing [Okla.] should continue to attract midstream energy companies in providing transportation and logistics to meet demand,” the analysts wrote.

The current third quarter will see significant increases that could top the Permian’s total takeaway capacity. Stratas forecast average third-quarter the basin’s crude production to be 3.688 million barrels per day (MMbbl/d). Pipeline and refining capacity, however, is only 3.684 MMbbl/d.

“If our current forecast holds, then we expect production to slightly be over the available capacity in the region,” Stratas said, adding that the forecast stretches from third-quarter 2018 to the end of third-quarter 2019. Fourth-quarter 2019 will see an 81% jump in pipeline and refining capacity.

This makes for bottlenecks, and it’s easy to see why the midstream has multiple infrastructure projects underway or being planned to alleviate the takeaway problems. Construction work to link West Texas and southeastern New Mexico to markets should remain brisk for some time to come. 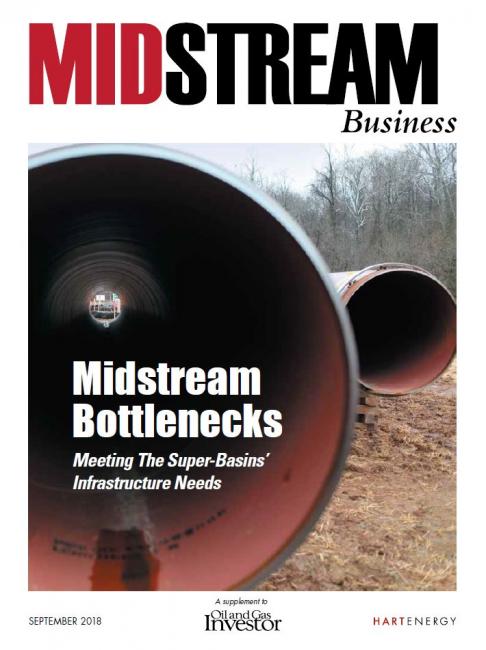