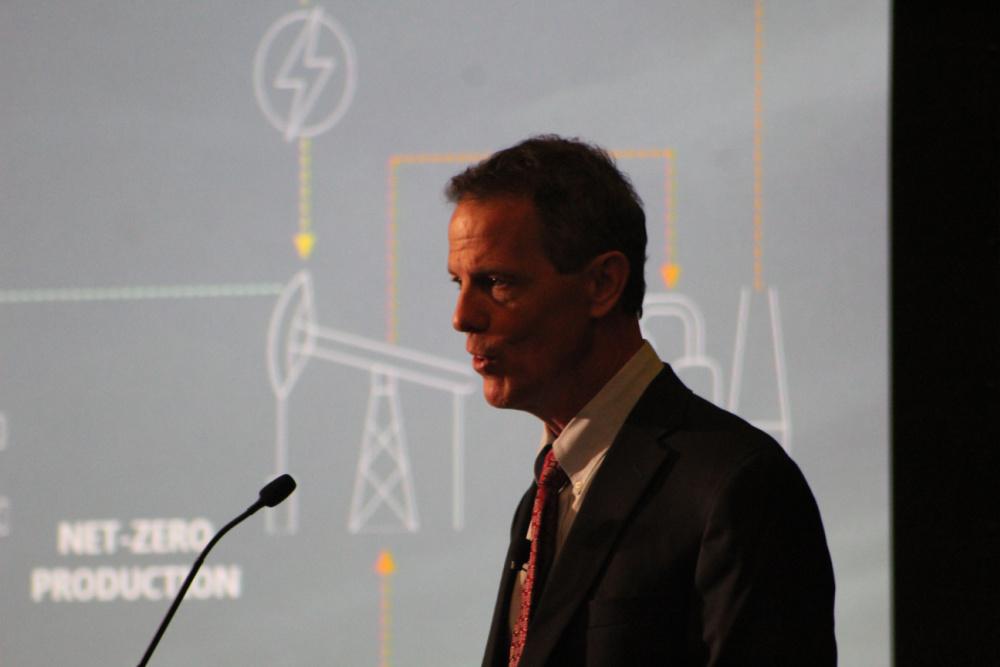 In particular, William Barrett, who serves as commercial director of Oxy Low Carbon Ventures, noted the enormous amount of CO₂ storage space in the Permian Basin during his presentation kicking off the forum on Nov. 3. (Source: Len Vermillion / Hart Energy)

MIDLAND, Texas—The Permian Basin has been a powerhouse in energy for roughly a century and, despite the push for an energy transition currently taking place at COP26, Occidental Petroleum’s William Barrett doesn’t see that changing.

“You’re the pioneers in primary production, secondary production, enhanced oil recovery—all the methodologies there ... and I believe the Permian Basin is poised to become the leader in this transition to a low-carbon world,” Barrett told attendees of Hart Energy’s Carbon Management Forum on Nov. 3.

Serving as commercial director of Oxy Low Carbon Ventures, Barrett is familiar with the potential role the Permian can play in the low-carbon transition. The venture capital arm of the Houston-based company has chosen the basin to build the world’s largest direct air capture facility, expected to begin construction in 2022.

In particular, Barrett noted the enormous amount of CO₂ storage space in the basin during his presentation kicking off the forum.

“The point that is available out here to store carbon dioxide is estimated by NETL (Department of Energy’s National Energy Technology Laboratory) to be 50 gigatons,” he said. “To put that in perspective, if you were to take all of Occidental’s greenhouse-gas emissions and capture those, the Permian Basin would store those for 1,000 years.”

Secondly, and equally important to the basin’s future success, are the people, Barrett said.

“The high number of innovators and problem-solvers here that are already working in the Permian Basin... these are the people, you in this room included, that will be the pioneers in this transition,” he said. “You will be coming up with the solutions on how we get to the low-carbon world.”

Taking a step back, there are multiple pathways for a company to reach its net-zero emissions target, according to Barrett.

“There are many tools in the toolbox, so I think each person in each company has to look at their assets and after analyzing those figure out what’s the best pathway,” he said.

Occidental, itself, is currently pursuing several different initiatives as part of its commitment to reducing CO₂ emissions and atmospheric carbon levels.

One of the examples he gave during his presentation was Project Tundra, an initiative led by the Minnkota Power Cooperative to build the world’s largest capture facility at a coal-fired power plant in North Dakota. Oxy Low Carbon Ventures is providing carbon storage consulting services to advise on the safe design and overall requirements of CO₂ storage for the project with construction slated for 2022.

In the Permian Basin, Occidental is working with 1PointFive Inc., a joint venture between Oxy Low Carbon Ventures and private equity firm Rusheen Capital Management, to develop the largest ever facility to pull CO₂ out of the atmosphere through a process known as direct air capture for its operations. It will also be the first commercial-scale development using Carbon Engineering Ltd.’s direct air capture technology.

Barrett said Occidental is excited for this project, in particular, and already has plans to build at least up to 12 additional direct air capture facilities. However, the company chose the Permian Basin to build this first facility because he said a lot of the supporting infrastructure is already in place.

Ultimately, Occidental is aiming to produce net-zero oil, which serves to support further decarbonization of the fuel economy and will play an integral role in the energy transition, Barrett said.

“You have shipping, aviation, rail, long-haul trucking—all of those are going to take more time to transition than it is just for me to go down and take my car and trade it in for an electric car,” he said. “I can do that today.”

“But these take more time, so that’s the transition that we’re going to be in,” he continued. “It’s not going to happen over night. By definition, transition takes a while to happen.”