According to a release, the companies signed a definitive agreement for Energy Transfer to sell its 51% interest in Energy Transfer Canada to the JV, which includes participation by Pembina Pipeline and global infrastructure funds managed by KKR, at a valuation of approximately CA$1.6 billion (US$1.3 billion) including debt and preferred equity. The remaining stake is already owned by KKR’s funds.

“The agreement allows Energy Transfer to divest its high-quality Canadian assets at an attractive valuation to further deleverage its balance sheet and redeploy capital within its U.S. footprint,” Energy Transfer said in the release.

Energy Transfer Canada, based in Calgary, Alberta, is one of Alberta’s largest licensed gas processors, according to the release. Its assets include six natural gas processing plants that have a combined operating capacity of 1,290 MMcf/d and a network of approximately 848 miles of natural gas gathering and transportation infrastructure in the Western Canadian Sedimentary Basin.

The sale is expected to result in cash proceeds to Energy Transfer of approximately CA$340 million (US$270 million), subject to certain purchase price adjustments, and close by third-quarter 2022.

Separately, Pembina and KKR on March 1 agreed to form a JV, merging their Western Canadian gas processing assets in deals worth CA$11.4 billion (US$8.99 billion), which included the Energy Transfer Canada transaction.

“Pembina is always interested in creative M&A projects,” COO Jaret Sprott said on a call discussing the deal, even as the Calgary-based company focuses on integrating the assets of the venture. 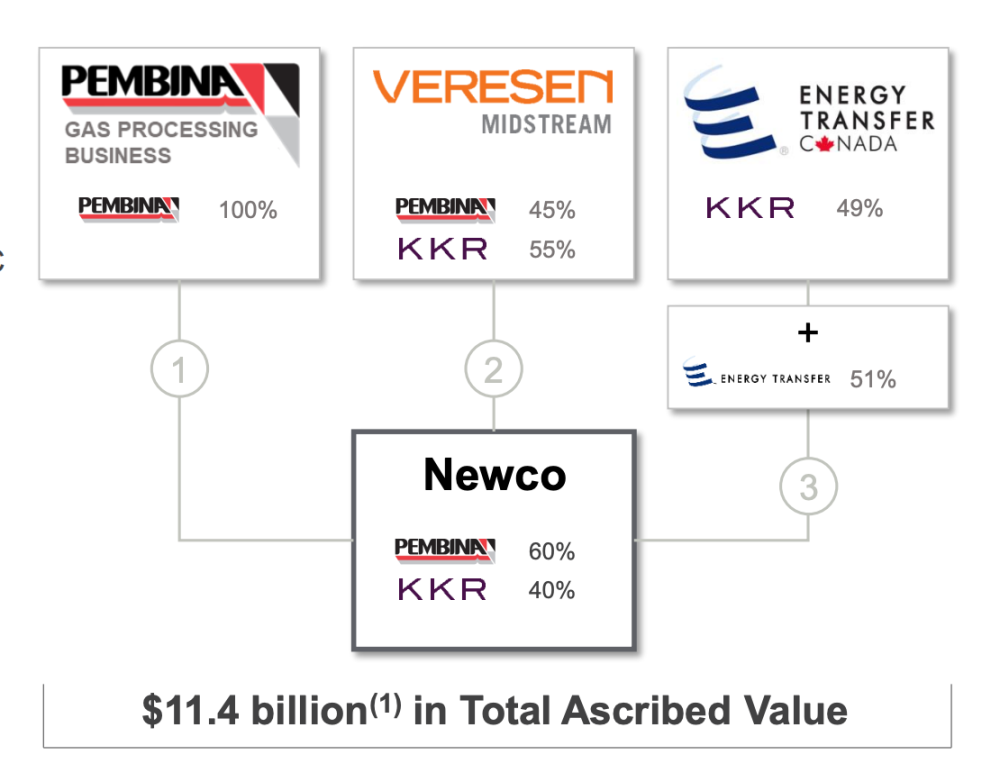 The combined venture is expected to have natural gas processing capacity of about 5 Bcf/d, or about 16% of Western Canada’s total processing capacity. Pembina will operate the new company and own 60% of the JV while KKR’s global infrastructure funds will own the rest.

The new company will also include the Veresen Midstream business, in which funds managed by KKR have a 55% stake while Pembina owns the rest.

The deals are expected to close late in the second or third quarter. Pembina said it intends to sell its interest in its Key Access Pipeline System to finance the deal, and is evaluating its portfolio to look for other noncore, nonoperating assets to sell.

Pembina also said it plans to increase its dividend by 3.6% after the deal closes, and that the deal allows it to raise full-year share repurchase target to CA$350 million (US$275 million) from CA$200 million.

2023-01-31 - According to Refinitiv data, Russian gas exports to Europe dropped to a new post-Soviet low in 2022, but its total LNG exports rose to approximately 33 million tonnes, with more than half of it going to Europe.

German Industry to Pay 40% More for Energy Than Pre-crisis