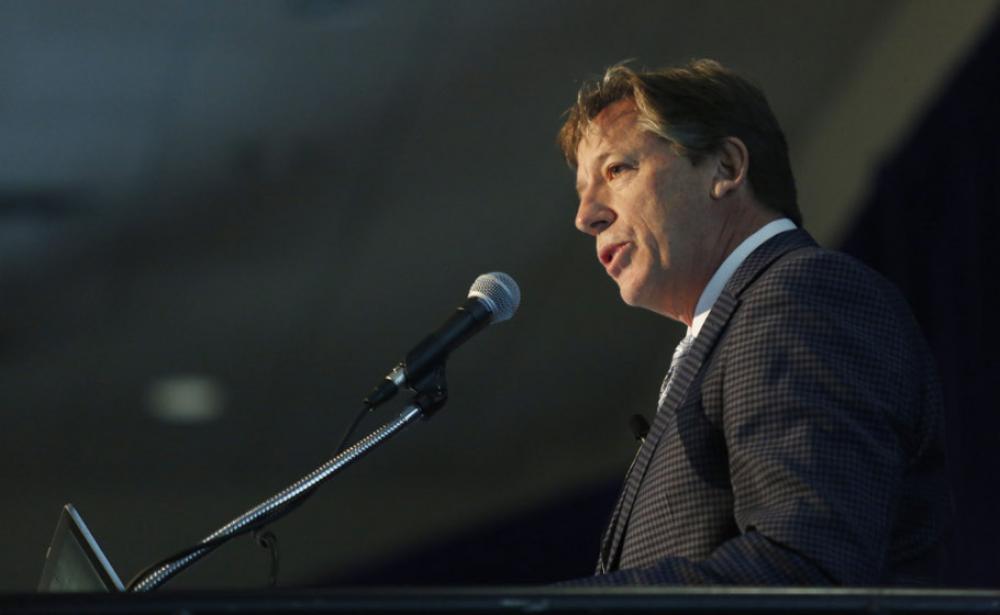 Richard Morrison, BP's regional president for the Gulf of Mexico, says the industry is seeing lower drilling costs in the GoM. (Source: OTC)

HOUSTON—It is safe to say that many of the attendees at this year’s OTC were ready to face 2017 with a fresher perspective. At Monday’s OTC breakfast “A Fresh Look at the Gulf of Mexico” Richard Morrison, regional president, Gulf of Mexico (GoM) for BP, shared his perspective on the past, present and future of the GoM as the offshore oil and gas industry faces a new reality.

In looking back, Morrison said the GoM had experienced for a decade new growth, new players and new discoveries, and then it all changed. The lower-for-longer market severely impacted the GoM, with several companies that entered the basin during the past 10 years making the difficult decision to exit, Morrison said.

“The rig floater count currently sits at 267 units today. Of those, 117 are stacked. Since 2014, 74 of the fleet have been cut up and used for steel,” he said. “About 50% of the supply vessel fleet has been idled, the helicopter fleet has been reduced by about 100 airframes, and seismic activity fell from about 50 survey starts down to 11. The industry has only reported three FIDs [final investment decisions] in the last three years.”

Safety was the one bright spot for the industry, according to Morrison, in that there hasn’t been an increase in process safety incidents around the world.

Operators responded by making significant adjustments. For BP, the goal was breaking even at $40/bbl with a focus on safety never wavering while not giving up on the long-term potential of the GoM.

In addition, the company forged a plan that was cash flow positive by 2017 through a refocusing of its exploration program, cutting its rig and helicopter fleet by half, and continuing to invest in technologies to boost production in its wells, he said.

“We worked with partners BHP Billiton and Chevron to re-engineer, simplify and sanction Mad Dog 2 development to be competitive at $40/bbl price,” he said. “We’ve rebalanced the cost/revenue equation such that our GoM business’ free cash breakeven minimum is now less than $40/bbl, roughly half of what it was in 2014. This breakeven point includes the roughly $1.8 billion in investment in our business in the GoM.”

Through these and many more efforts, the company saw about a 15% increase in production and reduction in its production costs by 35%, according to Morrison.

What does the future hold for investment in the GoM deepwater?

“A current reality is that for the last five years, discoveries in the Miocene play—where most of the discoveries have been made—have become smaller and relatively few and far between,” Morrison said. “Secondly, not all rocks are created equal. A disproportionate number of discoveries have been tighter, hotter and higher pressure.

Innovation, technology and people with the grit always get it done, he added. One example of this is the “much-needed step change” is underway related to the cost of exploration.

Through a combination of factors the industry is seeing a reduction in the costs of drilling an exploration well in the GoM, Morrison said.

“At one time, the cost was well over $200 million per well,” he said. “We’re now seeing multiple wells drilled under $100 million and as low as $50 million. This is transformational for the E&P business.

“I believe the economics for deepwater investments make as much sense now as they did in 2001. Back then, the price was hovering around $20/bbl and material discoveries were being made. This is the same year that BP’s Thunder Horse Field was sanctioned.”

Jennifer Presley can be reached at jpresley@hartenergy.com.