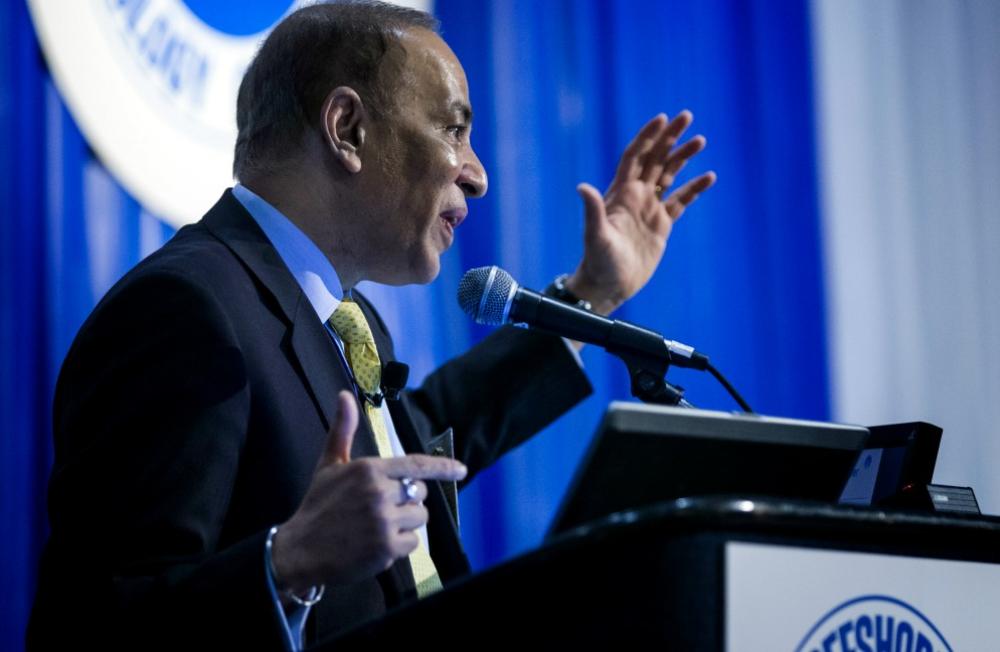 Investment in future innovation is what the industry needs to be able to survive at current and future oil prices, said Atul Arya, senior vice president of IHS Energy Insight, during an OTC luncheon on May 2. (Photo courtesy of CorporateEventImages.com)

HOUSTON—The future remains bleak for the industry as the sink-or-swim environment is here to stay for many oil producers, according to Atul Arya, senior vice president of IHS Energy Insight.

“It’s going to take a long time to get back to the good old days,” Arya said during an OTC luncheon on May 2.

What is vital for the industry’s future is innovation and “there’s no better innovation machine than the U.S.,” he said. “That’s the kind of change that we’re going to need in this industry to be able to survive at current and future prices.”

“Non-OPEC supply market is not great, but this is really important and needed to rebalance the market to reassure that prices go up because right now we just have too much supply and not enough demand,” he said.

A theory that has been around for a while is OPEC will rebalance the market. “We all live by it,” he said. However, OPEC made the decision in November 2014 to not cut production, as many hoped it would to stop the fall in prices.

Saudi Arabia minister of petroleum of mineral resources, Ali al-Naimi, was clear when he spoke at IHS CERAWeek in Houston in February. “He said you have a choice—you can borrow or you can liquidate … but the lowest-cost producer is going to remain in the market,” Arya said.

Besides being a low-cost producer, Saudi Arabia has the supply to be able to flood the market and maintain its market-share, he added.

“It sounds harsh, and unfortunately it is, but it is the most efficient way to rebalance markets,” al-Naimi said at IHS CERAWeek. “Cutting low-cost production to subsidize higher-cost supplies only delays an inevitable reckoning.”

Unlike Saudi Arabia, many other countries in OPEC are struggling such as Venezuela. The pressure from oversupply on oil prices led major oil producing countries, some OPEC and some non-OPEC such as Saudi Arabia and Russia, to meet in April to discuss a possible production freeze.

Though the meeting proved to be unsuccessful, as Saudi Arabia refused to go forward with a freeze without cooperation from another key player—Iran.

Iran’s ability to sell oil on the global market has been hobbled since 2011. Ever since sanctions related to development of nuclear capabilities were lifted in January, the country has been trying to ramp up volumes.

What happens in Iran this year and next is going to be hugely important in terms of supply, Arya said. Down the road, they have a lot of capacity and oil reserves so they can produce and make the market a lot more challenging.

OPEC is set to meet for its regular annual meeting in Vienna, Austria, on June 2.

Global oil production exceeded consumption by more than 1 Bbbl in 2014-15, according to the International Energy Agency.

“In my career I’ve never seen this kind of data, which is that there’s just so much oil floating around. It’s just unbelievable,” he said.

The good news is the oil and gas business is a cyclical industry, like any other commodity, he said.

“It will take us probably all of next year to rebalance the market,” he said. “We don’t see market rebalancing until the second half of 2017.”

The pivot point for U.S. shale will be $50 per barrel West Texas Intermediate (WTI). However, the average price of oil so far this year remains low—at $37 per barrel WTI. But a higher oil price in the current oversupply environment would not be good news in any way, he said.

A rise in price would cause production to increase, which is “the last thing we need right now.”

“Going forward, at least for this year in the U.S., we’re going to see a drop in production because we’re not at $50 and the companies cannot really spend enough money to be able to produce or add production,” he said.

IHS predicts the decline in oil production in the U.S., which began at year-end 2015, will steepen going forward. The firm anticipates U.S. oil production will drop to 8.5 MMbbl to 8.6 MMbbl in 2016 from its peak last year of 9.6 MMbbl to 9.7 MMbbl.

The only two non-OPEC countries that will see production going up this year are Brazil and Canada, he said. This is due to ongoing projects in Brazil’s deepwater and the Canadian oil sands.

The short cycle of oil prices is here to say, he said. The industry will see “quite a lot of” oil prices going up and down.

Any disruption or any news is going to have a big impact on oil prices though.

“Last year we had the same situation where prices went up—it’s déjà vu actually,” he said.

“No one can really forecast oil price,” but a sign that the industry is in the clear is when oil starts being sold from storage, he said.

Saudi Arabia’s Oil Minister: ‘We Have Not Declared War On Shale’

TC Energy has declared force majeure on crude oil deliveries at destinations in Texas on its Marketlink pipeline, citing power outages caused by severe cold weather in the state.

Two Permian pipelines are on track to come online in 2021.