Advances in well-established technologies are playing a major role in production optimization and the generation of accurate well and reservoir data for decision-making support. One such example is chemical tracer system technology.

The underlying premise of chemical tracers is that they allow operators to monitor zone-specific inflow, identify inflow issues and perform targeted well intervention from qualitative and quantitative interpretations.

This is achieved through polymer rods containing chemical tracers installed during the manufacturing process of the completion in the different zones of the well. With the chemical tracers and the polymer matrix being stable and inert in a wide range of well conditions, the permanent tracers are contacted by target fluid and will selectively release upon fluid contact.

Although the initial development of inflow tracers was designed to provide qualitative information on the location of water breakthroughs in production wells, this evolved into the development of oil tracers for oil inflow monitoring with an interpretation based on the quantification of transient flow.

When the well is shut in, a cloud of tracers is built up in the individual well zones and then flushed out when the well is opened. By analyzing the arrival pattern of tracers on the surface and tracer concentration decay during the startup, it is possible to determine both qualitatively and quantitatively from where production is coming. This analytical approach has recently been verified to provide excellent results for a 25-km (16-mile) subsea tieback, where a clear and quantifiable plot of tracer arrival time, concentration and decay was achieved.

With RESMAN’s nonintervention, intelligent tracer technology, integrated with the completion equipment to monitor segments of the reservoir interval, small amounts of tracers are released continuously when contacted by the target fluid.

By analyzing samples taken from the well over a period (e.g., for two months with one sample taken every week), it is possible to correlate trends in zone-specific tracer concentration with trends and changes in production behavior for the well. This can be related, for example, to oil, water and gas production rates, water cuts, gas-oil ratios, bottomhole/tubing head pressure and temperature, and sand production.

Intelligent tracers, when correlated with global production data, provide information about changing production trends from each zone and add a zonal resolution to the well production data for targeted well performance assessment and operational decisions. For instance, if the water cut suddenly increases, an increase in tracer signal from one of the zones will indicate from which zone and at what time the increased water breakthrough occurred, and therefore also what zone to keep under observation and for potential remedial action (such as water shutoff operations).

Figure 1 illustrates how two independent water breakthrough events from one subsea well were detected through intelligent tracers. In this case, the operator adjusted the reservoir models and improved the management of the fieldwide waterflood program. 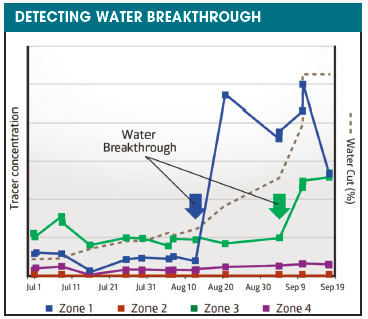 Sudden drops in oil tracer signals also can infer differential pressure depletion along the wellbore as well as identify targets for zone-specific stimulation to increase oil production from such zones. The tracers can determine if the different zones are producing after initial startup and assess if the well has been properly cleaned. They also can be instrumental in testing different well designs or longer well paths to determine the relative production from a lateral or extended toe in the well (based on the transient flow model).

If the choke is reduced, the drawdown and production rate are reduced and, from tracer profiles, it will be possible to see if tracers from specific zones disappear. This would indicate that this zone requires higher drawdown and therefore provides information about differential pressure support distribution along the wellbore.

Conducting a controlled multirate test and correlating production changes with tracer signals will provide the operator with essential information about the operational modes of the well and can be used for production optimization and to support well operation decisions.

The concept of continuous monitoring where tracer signal trends are cross-correlated with general production data also is compatible with existing data workfl ows used for production optimization and reservoir surveillance. In this way, the value can be extracted when tracer data are uploaded into the operator’s existing database system and software platforms. To this end, RESMAN has developed software to import the data into Petrel and Emerson’s Roxar RMS reservoir characterization software.

One operator wanted to determine the inflow contribution across the reservoir interval from each branch of a dual-lateral well without performing a coiled tubing intervention for a production log. RESMAN tracers, with uniquely identifiable signatures, were placed in three 1,524-m (5,000-ft) laterals.

In this case, inflow distribution results revealed that production along each lateral varied significantly with the toe of the upper lateral contributing 44% of production, while the entire lower lateral contributed 39%. Through the intelligent tracers, the operator avoided a high-risk intervention while gaining valuable insight into zonal inflow for improved completion design and well placements.

In a second example, an operator needed to identify the optimum stimulation strategy to maximize production in multistage fracturing wells. Intelligent tracers were again installed, this time in the 12 stages of a 2,438-m (8,000-ft) horizontal well, to measure inflow performance along the lateral.

Here, the inflow distribution for each stage revealed that the stages stimulated using mechanical diversion led to three times more production than those where dynamic diversion was used (Figure 2). Based on these findings, the operator deployed the optimum simulation method fieldwide and realized a dramatic improvement of 270,000 bbl of oil per well per year.

Uganda Expects First Oil Production To Be Delayed To 2022