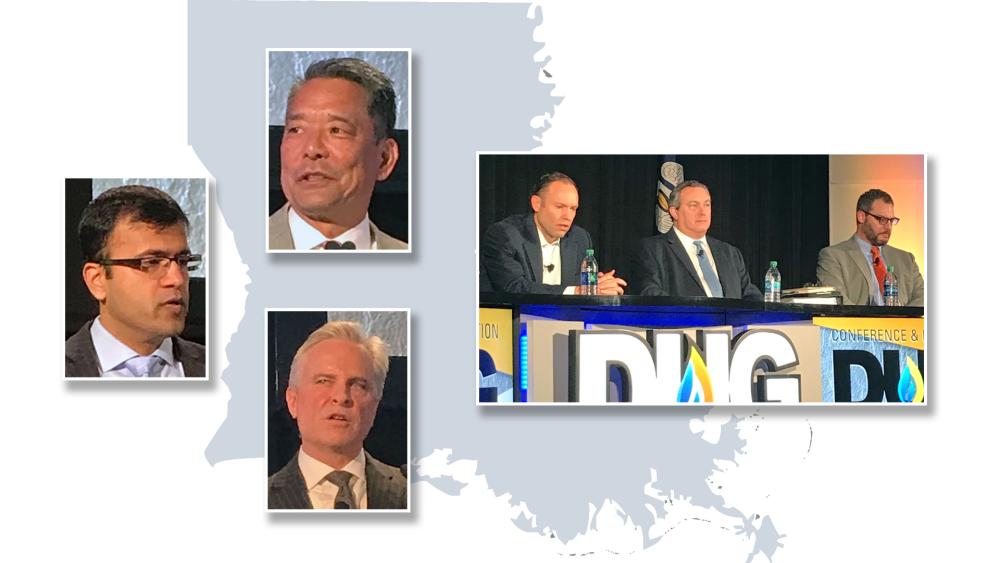 Editor’s note: This story was updated at 3:02 p.m. CST.  Check back for more updates tomorrow on HartEnergy.com. Tweet what you've experienced at the conference to @HartEnergyConf or @hartenergy.

SHREVEPORT, La.—The Haynesville is the only shale gas play to reinvent itself, said Welles Fitzpatrick of SunTrust Robinson Humphrey. That’s the message the analyst came to the stage at the 2nd Annual DUG Haynesville conference and exhibition to deliver to a packed Shreveport Convention Center on Feb. 20.

Fitzgerald didn’t stop there as he told the audience the reinvention is entirely driven by technology. Additionally, the Haynesville has a lower decline rate than other plays in the U.S., which he added will provide a springboard for the companies in the play.

He also said exports are shaping the future of natural gas and it’s positive on the pricing side.

BPX combines the legacy assets of BP Plc (NYSE: BP) in the Lower 48 with the acquisition of BHP Billiton’s U.S. onshore assets, which have doubled BPX’s production in the Haynesville and tripled its acreage position. The company is currently running six rigs in the Shelby Trough and Singh said the company plans to keep them running throughout the year.

Tellurian Inc. (NASDAQ: TELL) continues to lead the way to LNG exports out of Haynesville, according to John Howie, senior vice president of upstream at Tellurian.

Howie said the Driftwood LNG terminal will be supplied by low-cost gas. He added that the Haynesville Global Access Pipeline will move Tellurian’s equity gas from the Haynesville to southwest Louisiana.

The Haynesville’s gas was the catalyst for Tellurian’s choice to make upstream acquisition efforts. He also said the low-transportation costs to the export terminal were another logical factor.

Earlier in the day, Rob Turnham, president and COO of Goodrich Petroleum Corp. (NYSE: GDP), opened the conference with a look at the Haynesville’s renaissance. He pointed to the Haynesville’s favorable economics as the driving force. Specifically, he said low finding and development costs, abundant availability of good service companies, great takeaway capacity and geographic location are the main drivers of the region’s shale plays.

Goodrich announced favorable results in September at its Harris-Dickson14&23 numbers 1 and 3 in Red River and DeSoto parishes, La., which Turnham attributed to the critical role of technology. He said evolving completions that maximize near wellbore stimulations have “been a game-changer in the play.”

Additionally, the panellists noted that midstream deals are taking a dominant position in all Haynesville transactions. Premiums are being paid for midstream components, they said.

Frank Tsuru, president and COO of Indigo Natural Resources LLC, updated attendees on his company’s success in the Haynesville. Indigo has eight rigs running and Tsuru said the privately-held natural gas producer achieved an average lateral length of 7,250 ft in 2018. Indigo also has 4.5 trillion cubic feet of proved reserves and is producing more than 1.3 billion cubic feet per day gross.

Tsuru noted the close relationship between Indigo and Momentum Midstream LLC has also been instrumental for growth.

In the East Texas Haynesville, EURs in the areas near the Texas-Louisiana state line are rivaling EURs being found in the Louisiana core, said Alan Smith, president and CEO of Rockcliff Energy LLC.  "There are very strong, consistent results in Northeast Panola and Southern Harrison (counties, Texas)," he said, that are immediately west of the Louisiana core in Caddo and DeSoto parishes.

Gas flowing to U.S. LNG export plants was on track for a record high on Nov. 25 as Cheniere Energy’s Corpus Christi plant in Texas pulled in enough fuel to supply its three liquefaction trains.

The growth rate for LNG use is slowing now, however, and that could cause numerous planned projects to be put on the backburner for some time.