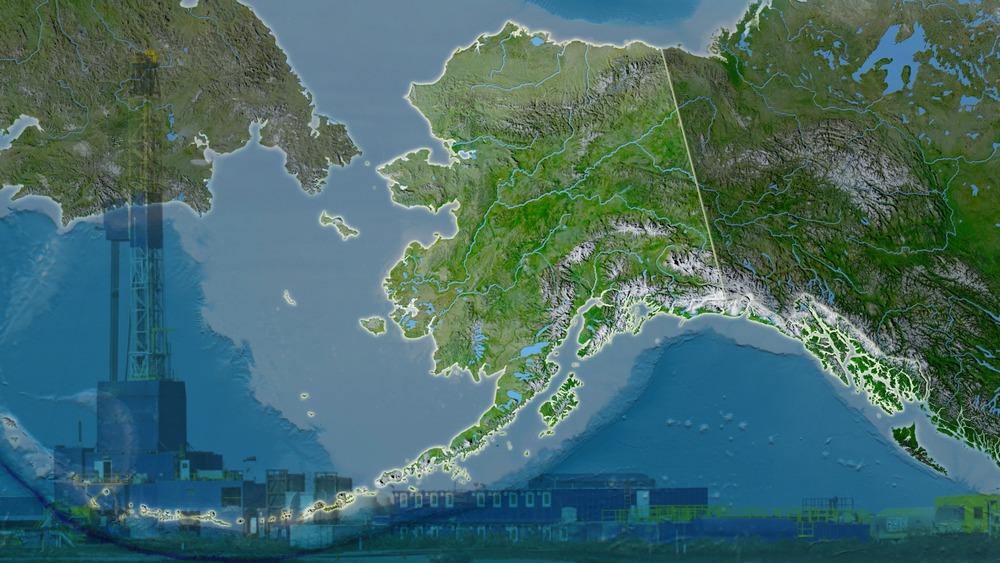 Horseshoe, located south of the Pikka Unit Nanushuk development, could hold another 300 MMbbl or more, according to Oil Search Ltd. (Source: Shutterstock.com/Hart Energy)

Remember that large oil discovery Spain’s Repsol and partner Denver-based Armstrong Energy LLC made last year in the Alaskan North Slope’s Nanushuk Play? The one called Horseshoe that extended the play and boosted the combined resource potential to at least 500 million barrels of oil (MMbbl)?

It could be even bigger, according to Oil Search Ltd.

The Papua New Guinea-based company this year acquired a stake in the discovery, which is an extension of the Pikka Unit Nanushuk development, and other assets. The Nanushuk area assets cover a 1,115-square-mile area.

“We presently see significant upside potential from the 500 million barrels assumed in our acquisition case, targeting an additional 250-million-barrel potential under this drilling program,” Peter Botten, managing director of Oil Search, said while delivering the company’s first-half results this month.

The Horseshoe section, located about 20 miles south of Pikka, could hold another 300 MMbbl or more.

The company increased the resource estimates based on a compilation of new drilling information received, including drilling results from ConocoPhillip’s nearby Putu well, Botten said.

ConocoPhillips said between 100 MMboe and 350 MMboe of resources have been discovered by the Putu and Stony Hill wells, which are located in the Narwhal trend.

“Recent drilling by ConocoPhillips at the Putu well … has highlighted reservoir continuity and the upside resource potential in this field,” Botten said. “Our drilling program in the Pikka B and C … is the target area for our 2019 drilling.” Oil Search aims to significantly increase 1C resources and move some of the 3C resources into the 2C resources. “We’re presently integrating recent technical advances in drilling and completion techniques into our development plan.” 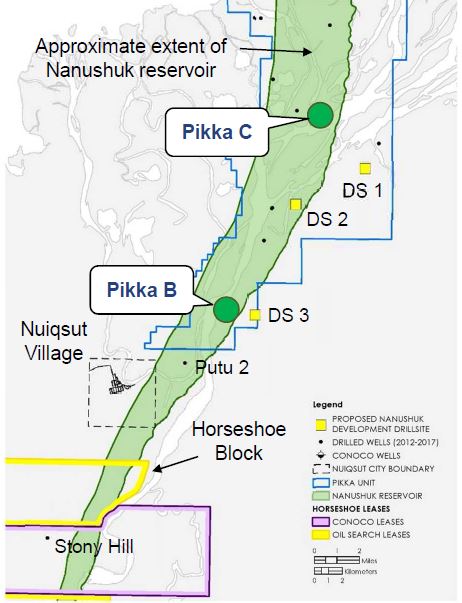 He added that “We also have done a lot more work in terms of reservoir evaluation and continuity. So I think we’re very comfortable that there is upside.”

Successful drilling campaigns of companies like ConocoPhillips have put the spotlight on the Alaskan North Slope (ANS), which is considered a super basin. Eni added 124 exploration leases to its Alaska North Slope portfolio after acquiring them from privately-held Caelus Alaska Exploration Co., the Italian major said Aug. 29. The company said it will hold a 100% working interest in all the leases, located onshore in the eastern North Slope southeast of the Prudhoe Bay Field.

Shallow Cretaceous formations such as the Nanushuk and Torok are getting attention as companies strike oil.

“Previously thought of as a mature basin, recent large discoveries made in the shallow Nanushuk and Torok formations indicate this basin has a lot of room left to grow beyond the Endicott and Ivishak formations, which are the reservoirs from which the giant Prudhoe Bay and Endicott fields produce,” Kareemah Mohamed, associate director of plays and basins research at IHS Markit, and lead author of the company’s analysis, said in a statement. “This is why we refer to this basin as being in the late-emerging-phase because it still has such significant resources to offer.”

During the next 12 months, Oil Search plans to appraise the Pikka unit and target areas for optimization before making a FEED decision in 2019. The company said it is currently integrating recent technical advances in drilling and completion techniques into its development plan. Hopes are to reach a final investment decision in mid-2020 and mark first oil in 2023.

For Horseshoe, focus remains on appraisal. In 2019, the company said work will include reprocessing 3-D seismic, reservoir modeling and data trades, including with ConocoPhillips. Appraisal drilling is expected in 2020.

Drilling results will guide the company and partners on how many barrels per day will be produced. Between 80,000 and 120,000 bbl/d could be produced from the Pikka Unit. The project development plan currently includes three drillsites, a central processing facility, infield pipelines, roads and other infrastructure.

Meanwhile, Oil Search and its partners—Repsol and Armstrong—are eyeing potential tiebacks, having already identified several opportunities that are being prioritized, according to Botten.

Oil Search’s recent acquisition included half of Armstrong’s interest in the conventional Pikka Unit, Hue Shale and Horseshoe Block for an initial price of $400 million. The company also has an option through June 2019 to purchase the rest for $450 million.

“We’re acutely aware that we need to walk before we can run in Alaska and we need to get it right and not drop the ball,” Botten said. “But things are really going well there, and we have a good team that will, I believe, deliver a safe and very productive program later in 2018 and into 2019.”

Oil Search is also working to strengthen relationships and build new ones in the area. Infrastructure sharing, considering the assets’ proximity to others, is among the topics of discussion.

On the call with analysts, James Byrne of Citigroup, asked about the possibility of unitization. “If there was a continuation of that reservoir across licenses what are some of the commercial outcomes with those adjacent licenses? Could there be unitization for example?”

Botten said unitization is not typically done on the North Slope; however, “clearly cooperation is and we are having, I think, very productive discussions with ConocoPhillips around not just how we would look at developing the field but also the use of what may be common infrastructure and cooperation about how the fields will be potentially developed.”