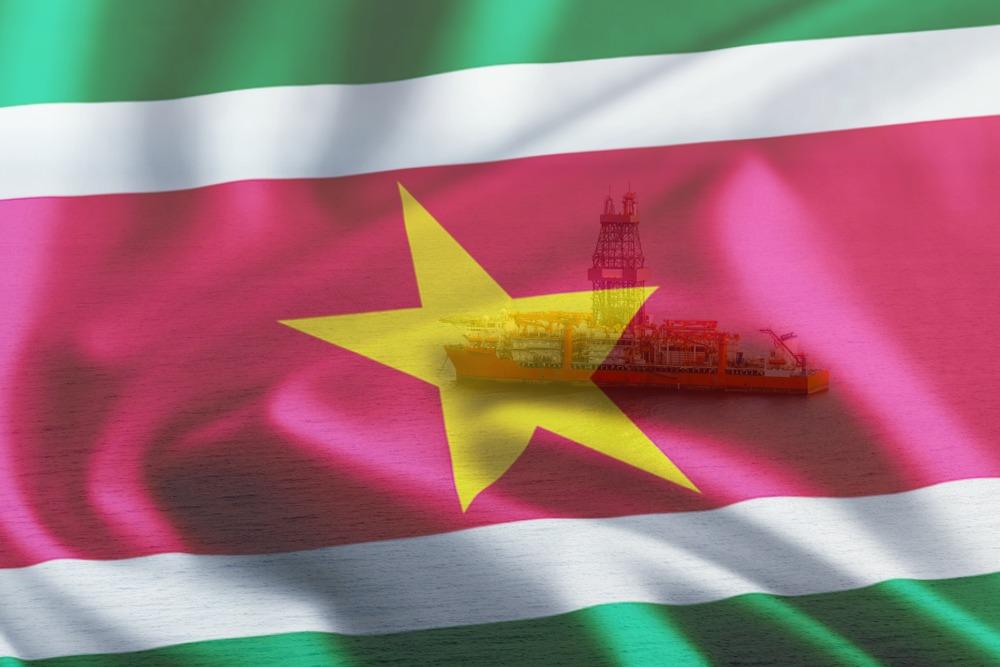 The Guyana-Suriname Basin has an estimated resource potential of more than 13 billion barrels of oil, according to the U.S. Geological Survey. (Source: Shutterstock.com/Hart Energy)

Working with partners Chevron Corp. and Hess Corp., Kosmos Energy Ltd. on Aug. 6 said it plans to begin drilling operations for the Pontoenoe-1 well offshore Suriname in mid-August. Drilling is expected to last about 60 days.

“Pontoenoe is the first of up to three independent prospects in Block 42 and is a similar play type to the Turbot and Longtail discoveries located approximately 70 km to the west in Guyana,” Kosmos Energy CEO Andy Inglis said on a call with analysts.

Both Turbot and Longtail were discovered by Exxon Mobil southeast of the Liza Field. Combined, the fields—located in the Stabroek Block offshore Guyana—have estimated recoverable resources of more than 500 million barrels of oil equivalent.

The Guyana-Suriname Basin has an estimated resource potential of more than 13 billion barrels of oil, according to the U.S. Geological Survey, and is considered one of the world’s top unexplored basins. The mainly offshore basin partially lies onshore, where state-run Staatsolie’s E&P efforts have been concentrated. But Exxon Mobil’s eight discoveries in Guyanese waters have piqued the interest of many oil players eager to get in on the action.

The Pontoenoe prospect is located in Block 42 offshore Suriname, which is believed to be an extension of the petroleum system offshore Guyana. Pontoenoe is a late Cretaceous Liza-type stratigraphic play, Kosmos said. When combined with two other prospects on the block—Aurora and Apetina—the three are prospective for more than 500 MMbbl of resources.

The company has said it plans to test “multibillion barrel prospectivity” spanning five independent Cretaceous plays. Exploration drilling is expected to continue from 2019 to 2021 in the area.

But Kosmos struck out with the Anapai-1A exploration well, which was drilled to test a Cretaceous structural/stratigraphic trap in Block 45. The well failed to hit hydrocarbons, Kosmos said in late June. About a month earlier the company experienced shallow borehole stability issues before reaching its target interval, which prompted it to re-spud the well.

These companies aren’t the only ones gearing up for exploration drilling offshore Suriname. Apache Corp. is chasing the potential oil prize as well. The company has interest in two blocks—Block 58 (100%) and Block 53 (45%). Together, the blocks span about 1.4 million acres.

During Apache’s latest earnings call, CEO John Christmann said the company has ordered long lead items in preparation for beginning a drilling program at Block 58, which is also on trend with recent discoveries offshore Guyana.

“We will definitely commence a program in 2019. … We got the 3-D back and we’re very excited about the potential,” Christmann said. “We’re on trend with the success that’s happened across the water boundary in Guyana.”

The exploration efforts could have a big impact for Apache, he added.

In July, Tullow Oil Plc also named Suriname as one of the areas including in its 2019 exploration drilling program. The company has identified the Goliathberg prospect in Block 47 as a candidate for drilling. Tullow failed to hit oil with the Araku-1 wildcat well offshore Suriname in 2017 but was encouraged by the recovery of gas condensate.

The crude oil line will link Cushing to Borger, Texas.

The project, engaged in a court fight, would double capacity of the pipeline.