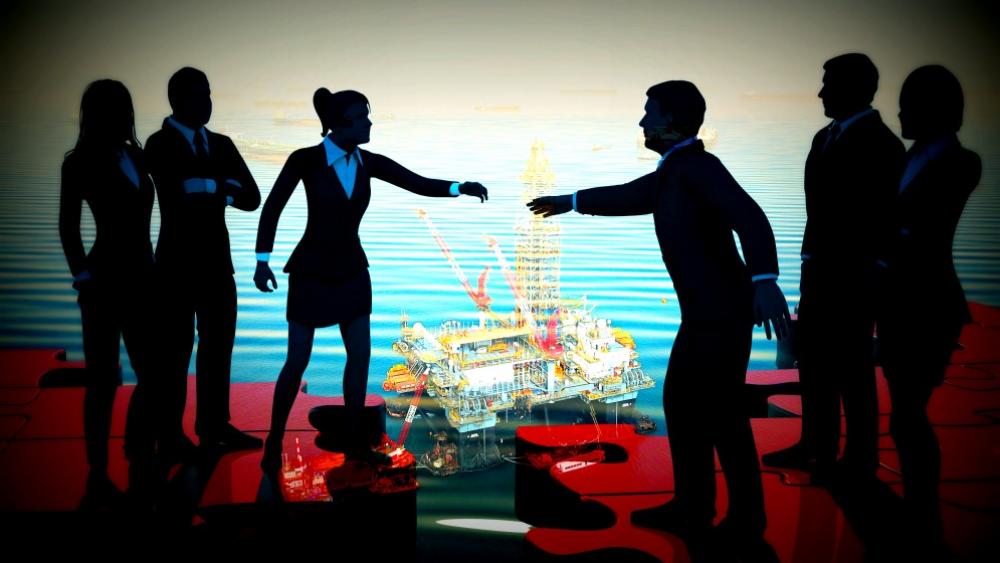 The merger of offshore drillers Ensco and Rowan will result in the world’s largest jackup contractor with a combined enterprise value of $12 billion. (Source: Shutterstock.com)

Offshore driller Ensco Plc (NYSE: ESV) said Oct. 8 it will buy out rival Rowan Cos. Plc (NYSE: RDC) in an all-stock acquisition worth about $2.4 billion.

The merger will result in a combined enterprise value of $12 billion and annual cost synergies of about $150 million, or roughly 7% of combined company’s operating and general and administrative (G&A) expenses, according to Luke M. Lemoine, senior oilfield service analyst with Capital One Securities Inc.

“[It’s] positive to see continued consolidation in the offshore drilling space,” Lemoine said in a research note on Oct. 8.

Pro forma, the combined company will own 82 rigs including 28 floaters, of which 25 are ultradeepwater, and 54 jackups with a combined backlog worth $2.7 billion. This places the combined company second behind Transocean Ltd. (NYSE: RIG) in total floater fleet and “firmly as the largest worldwide jackup contractor,” Lemoine said.

Analysts with Tudor, Pickering, Holt & Co. (TPH) viewed the merger as “a beautiful combination from a strategic perspective” with valuation as the firm’s lone initial concern due to the lack of an equity premium to Rowan shareholders.

“Furthermore, Ensco will now gain exposure to the ultra-harsh jackup market [particularly in Norway], which is a market that is quickly beginning to tighten, and double-down on its already robust market share position with Saudi Aramco via addition of Rowan’s ARO Drilling joint venture [which will be a significant growth engine moving forward],” TPH analysts said in an Oct. 8 research note. “[An] added bonus is the fact that both companies are targeting roughly $150 million of annualized cost synergies as a result of this deal, as this figure is well above Rowan’s current G&A run-rate [about $100 million per year].”

The synergies of the combined company are expected to be realized primarily from corporate and regional overlaps, supply chain efficiencies as well as the standardization of systems, policies and procedures across the combined organization, the companies said in a joint release.

Consolidation among drillers is paramount to a recovery in the market, according to Leslie Cook, principal analyst for Wood Mackenzie.

Cook believes the Ensco-Rowan combination provides an “excellent value” for the shareholders of both companies, which have strong brand recognition in both the jackup and floater sectors.

“What makes a company like Rowan particularly interesting for Ensco is the opportunity to further high-grade their growing portfolio with premium assets and expand their footprint in key markets such as Middle East, Latin America, Europe and U.S. Gulf of Mexico,” she said in a statement Oct. 8.

Combined, Ensco and Rowan’s floating rig fleet will consist of nearly 90% of generation VI and VII assets, Cook said noting: “these are the rigs that are most desired by operators globally, as they offer the best capabilities and flexibilities for various deepwater drilling programs around the world.” 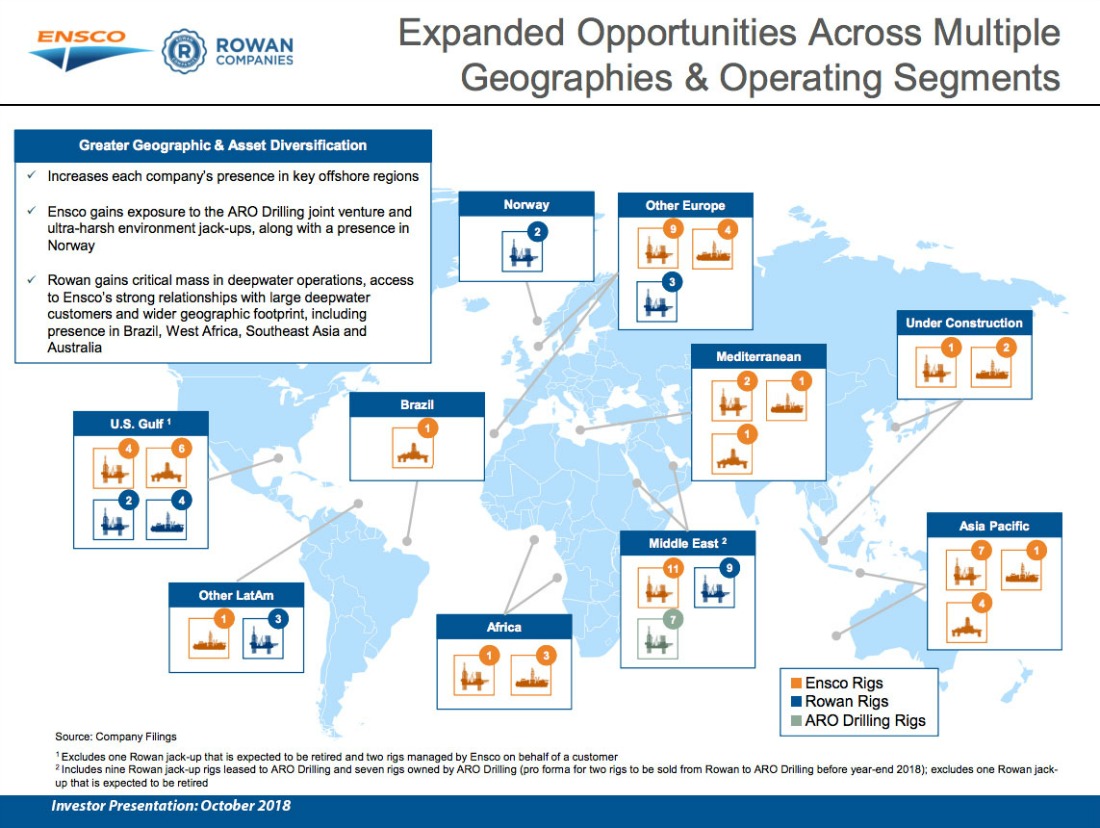 Burke said the combination will position the company to meet increasing demand for technologically-advanced drilling rigs as the offshore sector recovers.

“By merging our high-quality rig fleets and infrastructure covering the world’s most prolific offshore basins, we increase our scale while maintaining a shared focus on high-specification assets that will include ultradeepwater drillships and versatile semisubmersibles, as well as harsh environment and modern jackups,” he said in a statement. “Rowan shareholders also benefit from the addition of significant backlog and substantial scale in ultradeepwater operations.”

Trowell said the combination will create an “industry leader in offshore drilling across all water depths.”

“Through this combination, Ensco shareholders will uniquely benefit from Rowan’s strategic joint venture with Saudi Aramco, ARO Drilling, while all stakeholders will share in meaningful cost savings and even greater upside to improving market conditions as the industry recovery continues gaining momentum,” he said in a statement.

The combined company’s balance sheet is expected to have liquidity of about $3.9 billion, including $1.9 billion of cash and short-term investments. The planned combination is expected to be accretive to cash flow per share annually for the combined entity beginning in 2020.

The company will remain headquartered in London with senior executive officers to also be located in London and Houston.

The transaction agreement was unanimously approved by each company’s board of directors. The Saudi Aramco partner to the ARO Drilling joint venture has consented to the combination between Rowan and Ensco as well.

The companies said they anticipate closing the transaction during first-half 2019, subject to approval by the shareholders of Ensco and Rowan, regulatory authorities and other customary closing conditions.