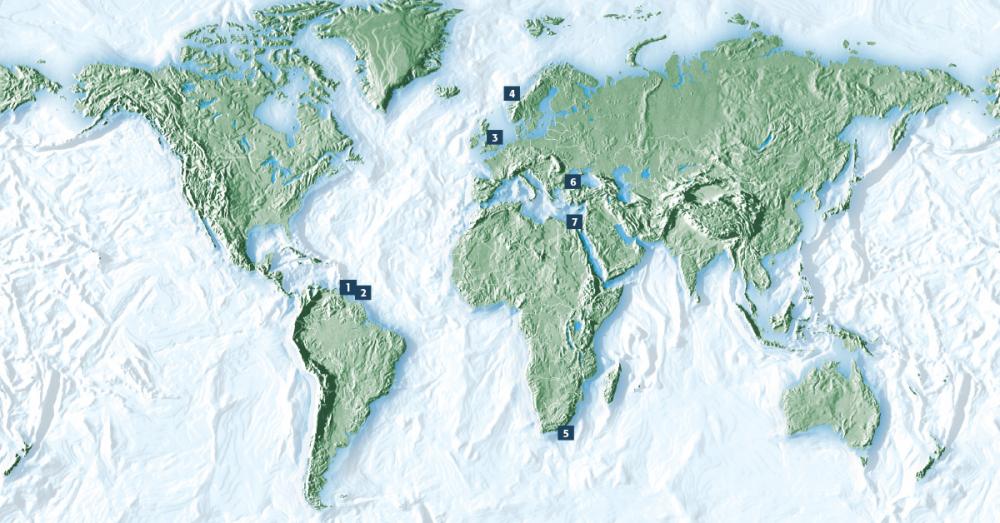 Touchstone Exploration has announced final production test results from the #1ST1-Cascadura well in Trinidad’s Ortoire exploration block. Two sections were tested: an upper zone from 5,570 ft to 5,915 ft and a lower zone from 6,056 ft to 6,218 ft. The upper zone (Cruse and Herrera) had an absolute open flow rate of 390 MMcf/d of gas and averaged 5,472 boe/d (86% gas). The lower test (Herrera) flowed 92 MMcf/d with an average of 5,157 boe/d (87% gas). Both tests were limited by the capacity of surface test equipment.

Exxon Mobil Corp. has mobilized a drillship to drill and perform an exploratory test in offshore Guyana’s Kaieteur Block. The venture, #1-Tanager, is targeting prospective resources of 256.2 MMbbl of oil. Current estimates for the site range from 135.6 MMbbl to 451.6 MMbbl of oil. The planned depth is 8,000 m, targeting the stacked Maastrichtian to Turonian reservoir intervals in the southern part of the block. The #1-Tanager is the first well in a potential multiwell drilling campaign being operated by Exxon Mobil on the Kaieteur and Canje Blocks over the next six to 12 months. This campaign will evaluate high-impact, Upper Cretaceous prospects in the Liza play fairway with possible multiple stacked reservoir targets.

Reabold Resources has spud exploration well at the West Newton B site in East Yorkshire, U.K., in PEDL183. The test is a follow-up to the #2A-West Newton discovery well in 2019. Surface casing at the new site will be set to approximately 80 m into Cretaceous Chalk. The planned depth of the new venture is about 2,000 m. According to the company, West Newton covers 176,000 acres and could represent the largest U.K. onshore oilfield discovery in decades with a significant liquid and gas development opportunity with two hydrocarbon discoveries. The findings will establish productive capability and any future drilling operations.

Neptune Energy has received a drilling permit for wildcat well #6406/12-G-1 H in Norway’s PL 586. The well will be drilled after a drillship completes the drilling of observation well #6406/12-H-4 in PL 586. The area in this license consists of part of Block 6406. This is the seventh exploration well to be drilled in this license, and it is about 36 km southwest of Njord Field.

Total has spud the #1X-Luiperd exploration well in Block 11B/12B offshore South Africa following the Brulpadda discovery. The exploratory well will test the eastern area of the Paddavissie Fairway on Block 11B/12B to follow up on the Brulpadda discovery of gas condensate and light oil. A drillstem test also is planned. Block 11B/12B is located in the Outeniqua Basin and covers an area of about 19,000 sq km. The Paddavissie Fairway is in the southwest area of the block and includes the Brulpadda discovery, which confirmed the petroleum system. The Luiperd prospect is the second to be drilled in a series of five large submarine fan prospects with direct hydrocarbon indicators defined utilizing both 2D and 3D seismic data. The #1X-Luiperd is being drilled in 1,795 m of water and has a planned depth of 3,550 m subsea. According to Total, the well will test the oil and gas potential in a mid-Cretaceous aged deep marine sequence where fan sandstone systems are developed within combined stratigraphic/structural closure.

Turkish Petroleum Corp. announced a deepwater gas discovery in the Turkish sector of the Black Sea. Well data and geophysical testing indicate the estimated reserves are 11.3 Tcf of gas. The #1-Tuna was drilled in Sakarya Field in Block AR/TPO/KD/C26-C27-D26-D27. Area water depth is 2,115 m, and the well had a total depth of 4,525 m. It encountered more than 100 m of gas-bearing reservoir in Pliocene and Miocene sands. Turkish Petroleum plans to begin production and connecting the gas to the national grid by 2023.

Eni announced a new gas discovery in the Abu Madi West Development Lease in the waters of the Nile Delta offshore Egypt. The #1-Nidoco NW-1 exploratory well hit 100 m of gas-bearing sands with 50 m in the Pliocene sands of Kafr-El-Sheik and 50 m in the Messinian age sandstone of Abu Madi. Both zones had good petrophysical properties. This is the first time Abu Madi was encountered in Nooros Field, and it extends gas potential to the north of the field. The preliminary evaluation indicates that the Great Nooros Area gas in place is estimated to be more than 4 Tcf. Area water depth is 16 m.