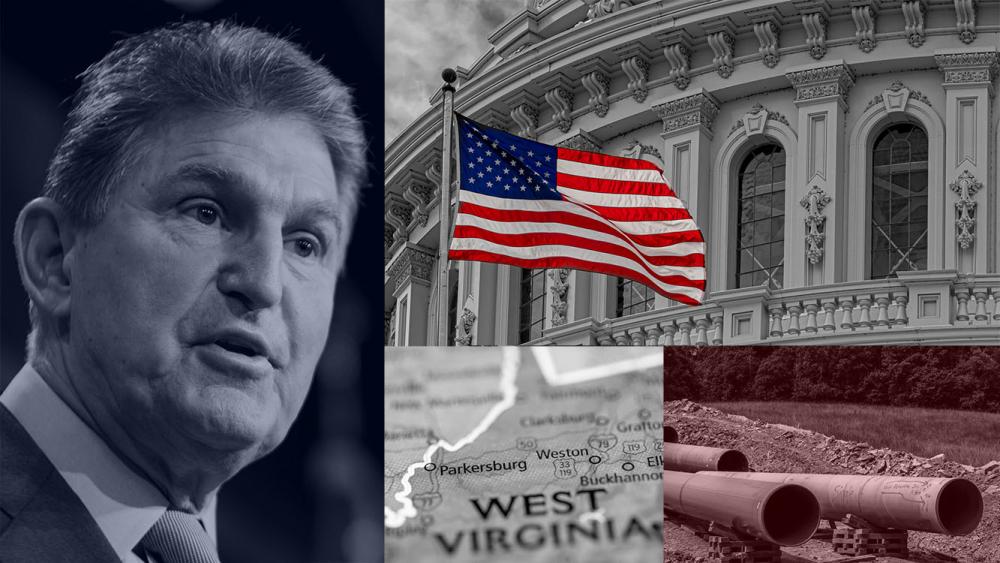 Just a day after The New Republic crowned him “King of the Senate,” Sen. Joe Manchin (D-W.Va.) held court on a webinar, emphasizing the importance of U.S. energy independence, why he will not let West Virginia shale workers and coal miners be left behind in the energy transition and why a carbon tax won’t happen on his watch, among other topics.

“For all of us to be able to move forward, we have to be in the same mindset,” Manchin said during a fireside chat hosted by the Bipartisan Policy Center on Feb. 4. “Do you believe the United States of America should be energy independent or do everything possible to stay energy independent? Because right now we are. Some people might not care about that. That’s a hard conversation to have.”

Holding onto the role of a superpower with a powerful economy makes self-reliance a must-have, Manchin said, warning of a return to the Arab oil embargo-induced gasoline lines of the 1970s, “when we put all of our eggs in somebody else’s basket.”

That said, not only does the newly appointed chairman of the Senate Energy and Natural Resources Committee not resist the transition to cleaner sources of energy, he embraces the opportunities to develop a cleaner environment through innovation, not through elimination.

“You have to have Innovation that creates the technology, whether it’s going to be hydrogen, further advancing wind and solar and renewables, and using the fossil fuels that are going to be used around the world for some time in the cleanest fashion humanly possible,” Manchin said. “Create a whole other economy, a whole other manufacturing base.”

From there, in the senator’s vision, trade policy kicks in. For example, entice trading partners to buy and use proven American carbon capture and storage technology and be rewarded with a break on the price of importing U.S. fossil fuels. Countries now have access to affordable energy, allowing them to grow their economies and alleviate energy poverty while reducing CO2 emissions. Who could argue with that?

“It’s so simple if we just look at it that way, but I got people that say, ‘don’t ever use any more fossil (fuel),’” he said during the webinar, clearly agitated. “‘Keep it in the ground.’”

“The only problem I had on the Paris climate accord was this: everybody should be singing from the same hymnal,” he said, referring to how some countries had less-stringent emission-reduction goals and that the entire agreement was self-regulating.

Without penalties, there’s no incentive to abide by the agreement. Countries that do abide find themselves in a competitive disadvantage vis-à-vis those that do not. Even France, host country for the accords, was found guilty by a French court on Feb. 3 for failing to reduce greenhouse gas emissions sufficiently in accordance with the agreement.

Manchin was pressed on carbon pricing, or placing a set price on carbon and defining a tax rate on emissions based on the carbon content of fossil fuels.

“No,” he said. “If they want to have a conversation on how we improve our climate and do it in the most responsible way, yeah, they’d have me—in a heartbeat. They want to talk about this as a penalty? Forget it, as long as I’m here.”

Power of a ‘King’

The power that a conservative Democrat like Manchin wields in a 50:50 Senate is considerable. Without his (and Arizona Sen. Kyrsten Sinema’s) support to kill the filibuster, Democrats were unable to get it done.

“Why do you think we have a filibuster?” asked the senator from the 38th largest state in terms of population. “So the minority has input.”

So, the filibuster lives on, as does a determination to forge a compromise that can secure at least 10 Republican votes to pass legislation.

The importance of that bipartisan mindset can be seen in Manchin’s approach to building out infrastructure for the energy transition. He won’t let the people in his state who delivered the oil, gas and coal to support a growing economy and supply a country through numerous wars be abandoned if he can help it.

“People in places like West Virginia, they’ll tell you they feel like the returning Vietnam veteran,” Manchin said. “We took our orders, did everything you needed. And now we’re not good enough. We’re not clean enough. We’re not green enough, and we’re not smart enough.

To that end, he wants to direct credits and incentives designed to encourage the transition to cleaner fuels back to the areas where people held traditional energy jobs.

Convincing the clean energy movement to give his home state a chance with plants and jobs is a lot of work, but he knows the price if he doesn’t succeed.

“This place is left deserted and dilapidated,” Manchin said.

Regulatory Changes Over US Oil and Gas Leases not Hampering Output

2022-03-24 - Oil and gas production on federal lands "is a relatively small (but meaningful) piece of overall U.S. output," Barclays said.