Behind the booming growth in shale oil and gas production is a conflict that every E&P company has experienced in some variation. On one front, prices in global markets have been tepid and uncertain, so operators know they must optimize the payback of each investment. They have sought to extract more oil and gas from every well, squeeze more wells into every lease and pace production declines, all while driving down the cost per barrel of produced hydrocarbons. In doing so, the industry trend has been toward low-viscosity slick water, complex fracture geometries and increased volumes of proppant and water in the fracturing process.

Yet on other fronts these same operators are acknowledging how resource-constrained they have become. Competition has grown for usable water sources, experienced field crews, preferred proppant mesh sizes and workable options to dispose of produced water. Every company seems to be chasing the same proppant mesh sizes favored by slickwater transport—and in increasing volumes—and the greater water needs of larger slickwater stimulation programs have been creating conflict with the competing water interests of ranchers, farmers, municipalities and other industries.

If that were insufficiently challenging, water doubles as the industry’s greatest waste stream. The flowback and produced water generated over the life of the well often has such high salinity and hardness that recycling is prohibitively expensive or technically challenging, forcing operators to find ways to dispose of millions of gallons of nonpotable water while simultaneously scrambling for sources of freshwater.

As an industry that struggles with negative public perception, development of solutions to reduce or eliminate this massive waste stream will inherently improve the optics around the life cycle of water in the oil field, thus reducing its environmental and social impact.

Many vendors have tried to address these challenges in a piecemeal fashion, addressing solely the issues of proppant transport, water recycling, or well and stage spacing to the exclusion of others.

Yet recently a new type of self-suspending proppant (SSP) technology has emerged that offers a comprehensive approach to many of the complications in unconventional oil and gas production. This technology exists to improve fracture geometry and proppant placement, enabling field development optimization and flexible water management plans.

The SSP technology offers options for both a freshwater and salt-tolerant hydrogel wrapped around sand or ceramic proppant. When mixed with water in a fracture blender, the hydrogel expands to create near neutral buoyancy for the coated proppant and the ability to flow at any pumping rate. This polymer shell stays securely affixed to the proppant substrate throughout pumping operations, imparting minimal viscosity and reducing friction pressure loss. With lower friction pressure the SSP technology enables greater slurry proppant concentrations to exhibit lower treating pressures.

Like traditional slick water, slurry viscosity remains exceptionally low—only adding about 5 centipoise (cp) for each pound of proppant added to water to a maximum slurry viscosity of about 35 cp. Unlike a traditional slickwater fluid system, the operator is not constrained to fine mesh proppant (e.g., 100 mesh or 40/70 mesh Northern white sand) and low concentrations (e.g., less than 2 lb/gal of water). This technology easily transports any proppant mesh size at high concentrations with 6 parts per gallon (ppg) commonly targeted and 12-ppg loadings achieved in the field. By using SSP, fracture programs can be optimized to generate complex branched fractures while still transporting proppant evenly through the generated pathways at any pump rate.

High proppant intensity can be achieved with smaller pumped volumes, reducing the water needed by as much as 67%. Alternatively, water can be shifted into the pad instead of being reduced with a greater likelihood of a propped secondary or tertiary fracture network, improving the EUR for a single well by more than 20% and reducing drilling and completion cost per barrel produced. This SSP technology has been field-tested as low as 3 bbl/min and more than 100 bbl/min through a range of plug-and-perf, coiled tubing and sleeve systems. SSP creates new flexibility in well and stimulation design, allowing any mesh through any fracture system for any well. Operators are now empowered to pursue the key performance indicators that matter to them in the areas of operational efficiency, reservoir recovery and/or capital and operational expenses. Depicted in the infographic is one possible way to move from a conventional slickwater design to a design that minimizes water sourcing and management, with the corresponding improved metrics that could only come with the use of SSP. 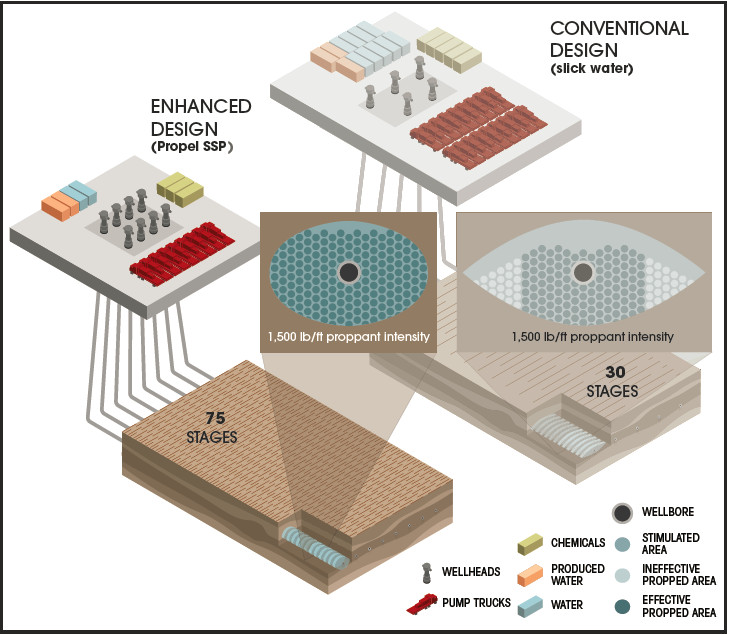 Building on the notion of any mesh, SSP allows operators to maximize conductivity, if needed, or otherwise decouple design from supply-demand constraints. The shift to fine mesh sand was originally predicated on cost reduction efforts and market dynamics (i.e., limited coarse mesh availability) in the 2013-2014 time frame. Fine mesh is no longer just a byproduct of mining high-conductivity coarse mesh sand and instead trades at a premium. With increased proppant intensity and cost of fine mesh, flexibility of sand sourcing only improves economic viability for oil and gas operators. In fact, nearly every aspect of stimulation design is open for optimization, as screenout-free proppant transport can be achieved in a broad window of possible pump rates, proppant mesh sizes or multistage fracturing systems.

The low frictional pressure and neutral density of a Propel SSP slurry means the pump rate can be optimized for the fracture it generates, not merely as some race against the settling of proppant within the fracture. Stimulation treatments can now achieve the same or better results with fewer pump trucks in less time and with less social and environmental impact. Flexibility in water sourcing and disposal minimizes the number and driving hours of tanker trucks while decreasing costs. Even chemical usage can be slashed since pumping SSP can mean no need for guar, cross-linker, friction reducer or the additional chemicals associated with each incremental gallon of water pumped in a sizably larger slickwater fracture. With SSP each stimulation stage pumped can be operationally leaner, more efficient in fracture generation and proppant placement and demonstrably better in long-term production. 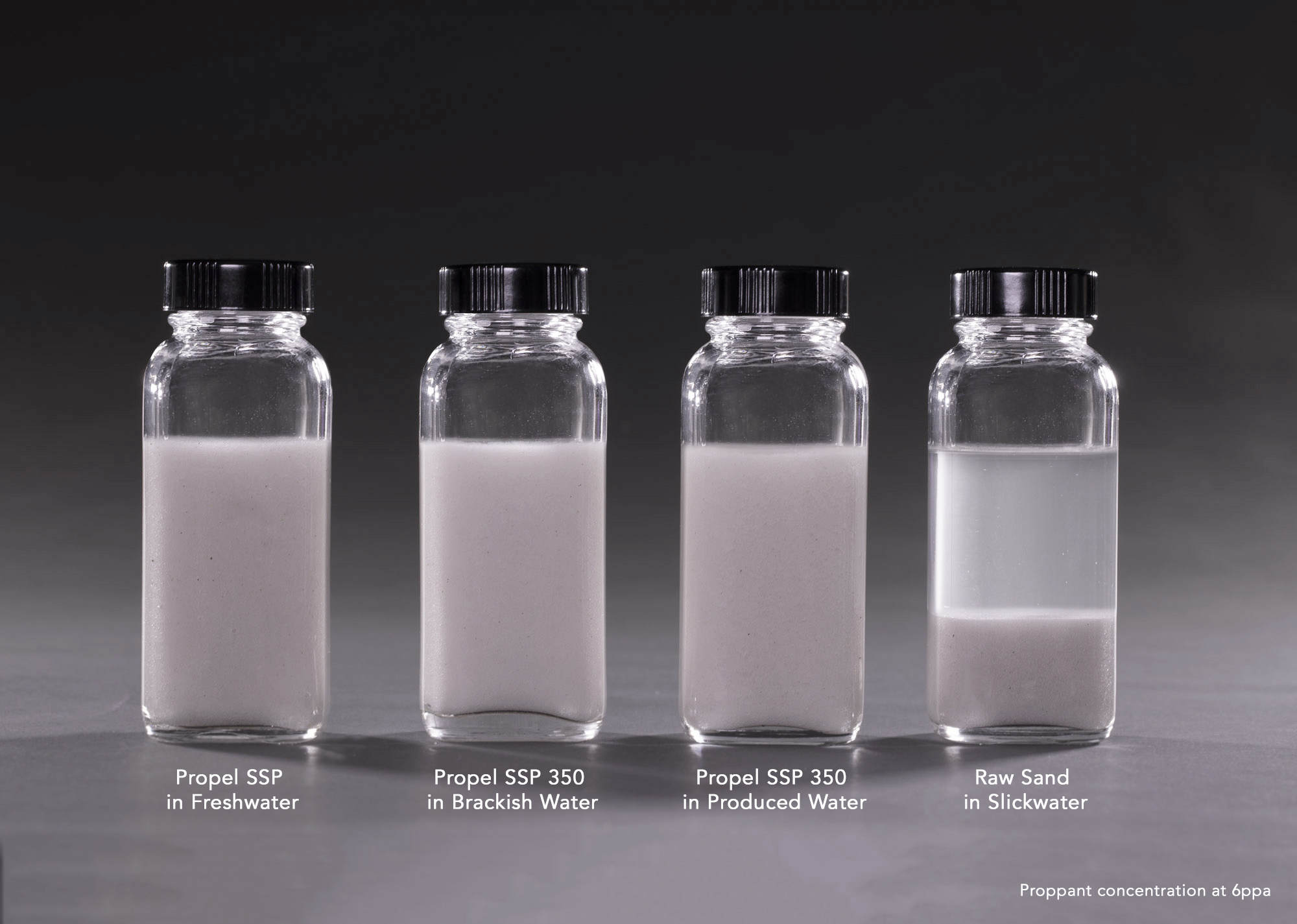 SSP use with flowback water

The real breakthrough achieved with this SSP technology is the recent addition of produced-water tolerance. Based on laboratory testing, the new version of this SSP technology will function in water with 350,000 ppm total dissolved solids and 40,000 ppm hardness. SSP technology can use flowback and produced water from every major shale basin in North America and immediately employ it as a fracturing fluid, reducing the need for disposal wells, wastewater cleanup costs and competition for potable water with the community. Gone are the transportation costs to disposal wells or offsite treatment facilities. Instead, the industry’s greatest waste stream becomes a valuable resource with direct reuse of flowback/produced water in subsequent hydrofractures, reducing water management costs across the life of the well. In creating a high salt-tolerant technology, the industry can address the root of multiple needs: the need to move proppant more effectively, the need to have productive stimulation treatments that last longer and the need to reuse water to reduce impact on supply.

In creating optimal fracture geometry petroleum engineers can reimagine fundamental well design practices with fewer operating constraints. Use of Propel SSP can allow operators to more effectively downspace without operational constraints. This proppant technology gives operators the tools to achieve maximum reservoir simulation, increased recovery and better economic return from their asset. Technology has created a chance for oil and gas operators to experience the rare win-win, with improved financial returns and a more environmentally responsible role in the communities in which they operate.

Upwing Energy, an artificial lift technology company, and Mitsubishi Heavy Industries (MHI), one of the world’s leading industrial firms, have been awarded the next phase of the magnetic drive system (MDS) project by DeepStar, a global offshore research and development consortium, on June 24.