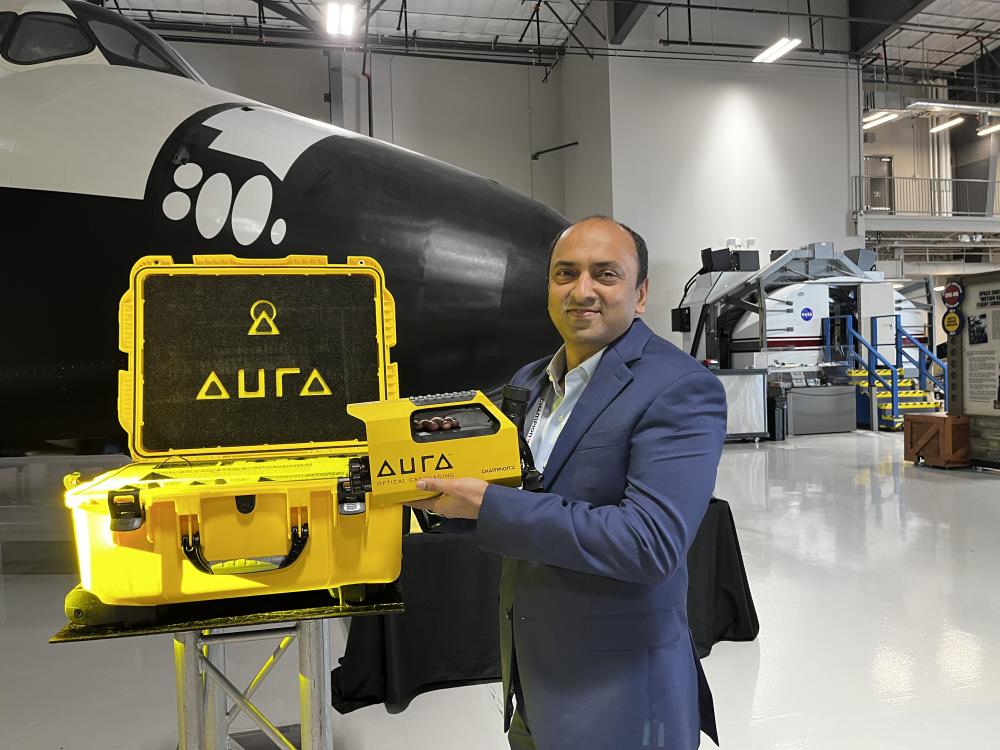 ChampionX soft-launched its newest handheld emissions-detecting camera at a Jan. 10 event in Houston.

Developed in part by ChampionX Emissions Optical Gas Imaging (OGI) group chairman David Furry, the latest generation camera is equipped with navigation and an integrated computer. Furry holds the patent for the first OGI camera used in the oil and gas industry, a device he built more than a decade ago on his kitchen table.

Saurabh Nitin, ChampionX’s senior vice president for emissions technologies, said the Aura OGI camera was developed in such a way that “even an untrained operator can provide the best possible optical gas imaging surveys in a fairly fast and efficient manner.”

The portable midwave infrared camera is different from the other OGI cameras on the market, Furry said.

“The first thing about this camera that stands out is that it has four times the resolution of any other camera,” he said.

It also has a “high sensitivity mode,” or gas enhancement mode, and the ability to overlay that onto an infrared camera image. Anything moving “it paints green, so it makes it easy for you to see the gas,” Furry said.

When the product is officially launched in third-quarter 2023, it will be Class One, Div Two certified, meaning it can be used in areas where hazardous materials are present. The camera also offers an ingress rating of 67– one of the highest levels of protection offered against dust, airborne particles and water and liquids.

A senior operator can set up a “smart route” that ensures the survey complies with regulations, and a junior operator can carry out the survey, Furry said. The camera’s antennas, navigation system and Wi-Fi capability ensure the Aura OGI knows its location and where to target infrastructure that needs to be surveyed.

As an operator arrives at an area to survey, “when he pulls the camera up, everything that he's supposed to look at has an X on it. And whenever he has looked at it long enough, then the X’s go away,” Furry said.

The on-board computer records the survey and can send it to the home office.

“You know that you actually went out to the zones, and you did what you were supposed to do,” he said.

When the product launches, the Aura OGI will come with an industrial tablet, which will also have navigation capabilities. Location metadata will enable an operator to return to the scene of a leak.

“You can take that tablet back to the same site and follow it to the zone that had the leak,” Furry said. “You can push a button, and it'll show you what was leaking at that zone.”

It greatly improves the way in which leaks have historically been marked in the field, he said.

When tested in the lab, the Aura OGI has detected emissions at 6 grams per hour per the Environmental Protection Agency (EPA)’s Quad-0a, which refers to EPA standards for oil and gas industry methane emissions.

He said the Aura OGI is leaps beyond the first OGI camera he developed for oil and gas purposes. The initial unit was only used in a lab setting. The third camera, first used in 2005, was actually portable, he said.

“The first camera that was portable was about the size of a loaf of bread” and could be set on the operator’s shoulder, he said.

The camera’s recorder and batteries were in a backpack. “It was heavy,” he said.

Furry said he had long wanted to develop a new camera, and he got his opportunity after ChampionX purchased the company he’d founded, Leak Surveys Inc., in February 2022.

Nitin said the way operators are using cameras for emissions monitoring has shifted as new technologies come into play.

“Now we have Wi-Fi available, and you are looking for much higher resolution images,” he said.

Furry and Paul Bonner, a product manager, took the Aura OGI from white board to prototype in 10 months.

The result is a modular camera aimed at reducing downtime and increasing the time it can be used in the field. The midwave infrared sensor is Quad-0a certified, and the camera is built to meet the upcoming requirements of Quad-0b and -0c.

“This is not just a normal camera. He [Nitin] got what he asked for,” Furry said.