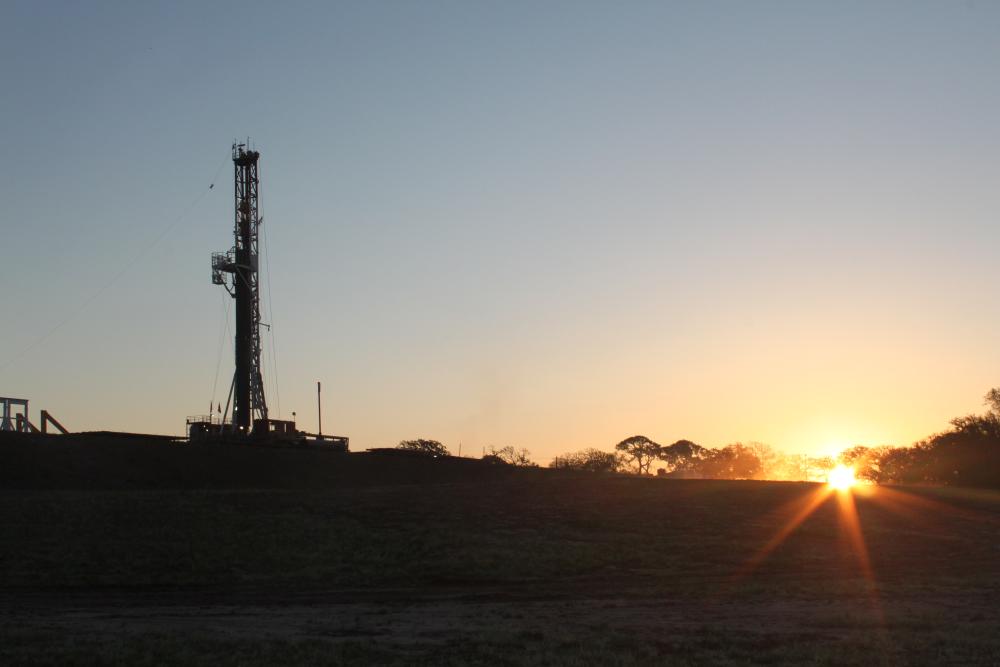 The Ideal 2000 rig is equipped with the Amphion integrated drilling control system and is enabled for use of the NOVOS process automation platform. (Source: NOV)

The shale boom transformed the onshore drilling rig fleet as rigs capable of drilling horizontal unconventional wells typical of major North American basins differentiated from their peers and, consequently, more sought after. The downturn demanded new efficiencies, driving a massive shift in well orientation that would ultimately make onshore unconventional wells the most economical and profitable drilling option. To drill and complete these wells, however, required better wellbore placement and hydraulic fracturing technologies. It required rigs with more power and speed that could drive the heavier strings necessary in more complex well construction as laterals got longer and formations more challenging. The industry demanded land rig advances that were ideal for use in this new oil field.

As oil prices recovered, and the market steadily gained momentum, the rigs that were coming back online the fastest were alternating current (AC) and “super spec” rigs, which are rigs with massive improvements in load capacities, drilling equipment with 1,500 hp or more and the ability to quickly move between well sites in pad drilling applications. Precision and control are also major concerns with super spec rigs, as stability is critical if wells are to be drilled without deviating from their planned trajectory through the oil-producing sweet spot. Lithologically complex formations with multilayered rocks of varying resistances have made wellbore placement and maintenance even more critical, positioning the rigs that are equipped to drill challenging extendedreach wells ahead of the competition.

Beyond power and speed upgrades, reducing footprint is a desire for drilling contractors, with modular equipment that can more easily be situated in various places on a drill floor becoming more widely used. Modularity allows the drilling contractor to customize the rig’s layout in a way that benefits the operator while optimizing equipment placement also ultimately lowers maintenance intensity. Additionally, rigs with automation capabilities built into the drilling control system provide further benefit to both the contractor and operator. As a result of the advent of these well-equipped super spec rigs in North American land drilling, mechanical rigs have generally not returned to service. Similarly, silicon controlled rectifier-powered (SCR) rigs have largely remained idle unless AC rigs were unavailable. In many cases, drilling contractors are looking to convert SCR rigs into AC rigs to improve performance and make them more competitive in the marketplace.

Much of the demand for super spec land rigs has come from the Permian Basin, which has experienced a renaissance of sorts over the past several years, as well as other high-activity areas in North America and the Middle East. Beyond the previously discussed benefits of these rig types in North America, the Middle East benefits from additional changes to rig design, including being able to handle higher temperatures and having wheeled moving systems suitable for desert applications. Across regions, part of the appeal of a super spec rig is that it has efficiencies that make drilling economical where it otherwise might not have been, and even the simplest of changes can have an impact. For example, having a top drive that runs up and down the mast rails instead of using a torque tube means the top drive can travel within the mast during rig moves, making rigup and rigdown simpler and faster. 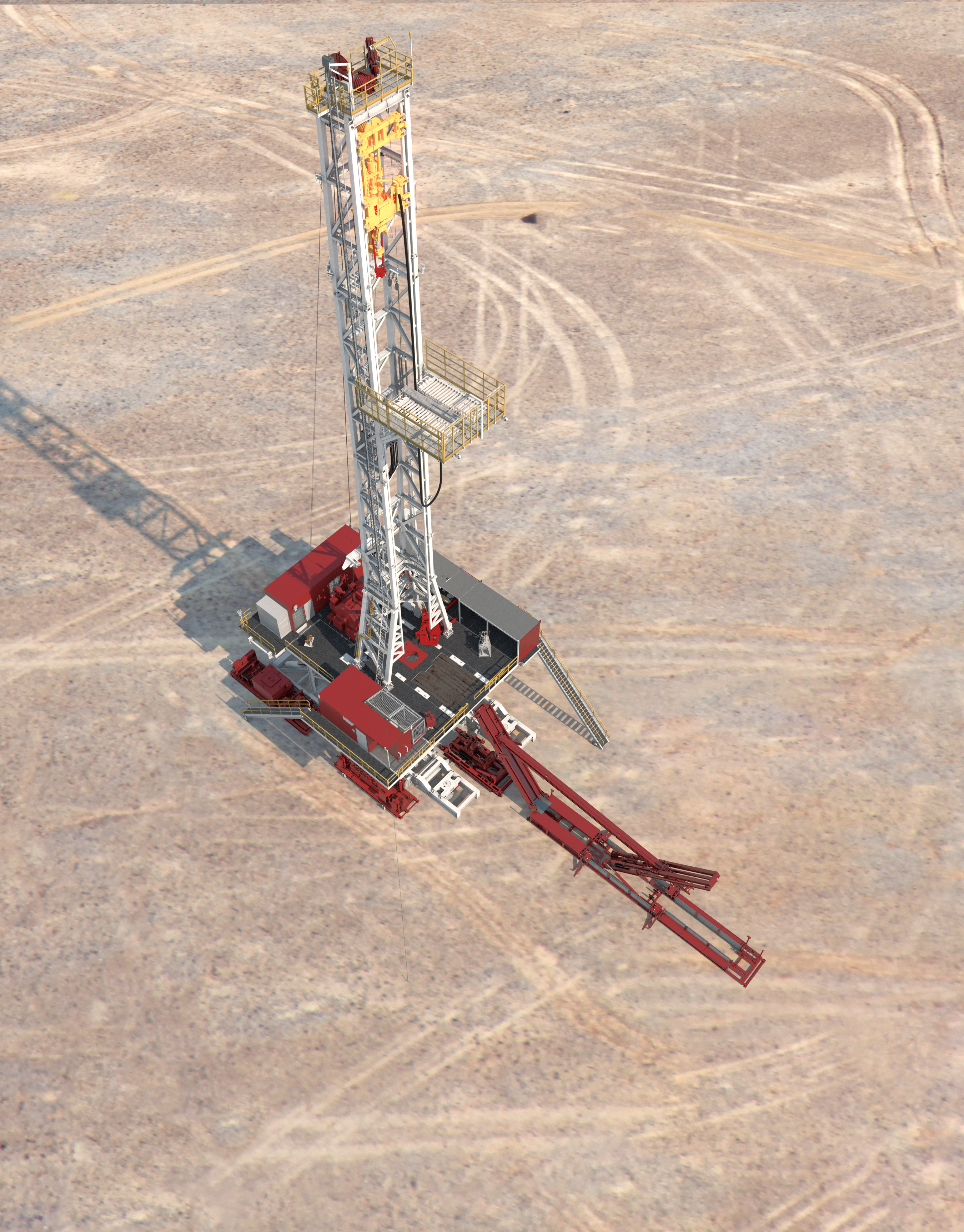 National Oilwell Varco (NOV), as a manufacturer of rigs and equipment, understands market dynamics in the land drilling arena. The need for higher horsepower, larger hookload capacities, increased setback capacity and pad drilling capabilities were the primary drivers as the company builds on years of design and engineering efforts to develop a new rig.

NOV announced its new Ideal 2000, a purpose-built land rig, not one upgraded from its original 1,500-hp configuration. The design of the rig allows operators to have configurable options.

An optional stand transfer vehicle can be included in the fingerboard, while pipehandling can be mechanized. The design of the drawworks enables its configuration to needed horsepower capacities. The rig’s design also is ready for the addition of a third mud pump and can accommodate up to four generator sets. A third mud pump not only provides an additional 7,500 psi of fluid circulating capacity for deeper wells but also makes the system more redundant—streamlining maintenance when the other two pumps are running or providing a backup in a case of failure in one of the other pumps.

Walking rigs not only benefit drilling contractors but also help to improve oil field economics, boosting efficiency and driving the output of the newer units higher. Typically, rig movement has required rigging up and rigging down, meaning that even the simplest of moves could be a nightmare because of time lost disassembling and reassembling the rig. Earlier rig models have not been ideal for walking applications for a variety of reasons, with the drawworks’ placement on the ground and the hydraulic power unit and cabling setup being the primary issues. The Ideal 2000 rig design has an integrated walking system, allowing the rig—with a full setback—to move to an adjacent well. Placement of the drawworks on the drill floor, along with a dedicated local equipment room for the top drive and drawworks, reduces cabling. The hydraulic power unit, BOP control unit, drill line spooler, and choke and kill manifold are cantilevered off the substructure to travel with the rig.

If the drilling contractor is interested in drilling automation, then the NOVOS-enabled rig equipment ensures less downtime for an upgrade. NOVOS, NOV’s process automation platform, is deployed within the Amphion or Cyberbase control system to automate repetitive processes, taking the burden away from the driller and standardizing performance at the rig and fleet levels. Also, the platform hosts a selection of drilling performance applications that address various drilling dysfunctions, allowing the operator to improve performance through better understanding of what’s going on in the well. Having the automation platform presents a benefit to all participants in the process; drilling contractors can further differentiate their fleet, and operators have access to critical performance-improving tools and software. Applications also can be custom developed, an endeavor already pursued by several oil and gas companies, universities and other interested parties.

The oil and gas rig count rose by one to 255 in the week to Sep. 18, energy services firm Baker Hughes Co said in its weekly report.

US Oil, Gas Rig Count Falls for the First Time in Four Weeks

The U.S. oil and gas rig count fell by two to 254 in the week to Sep. 11, according to data from energy services firm Baker Hughes Co.