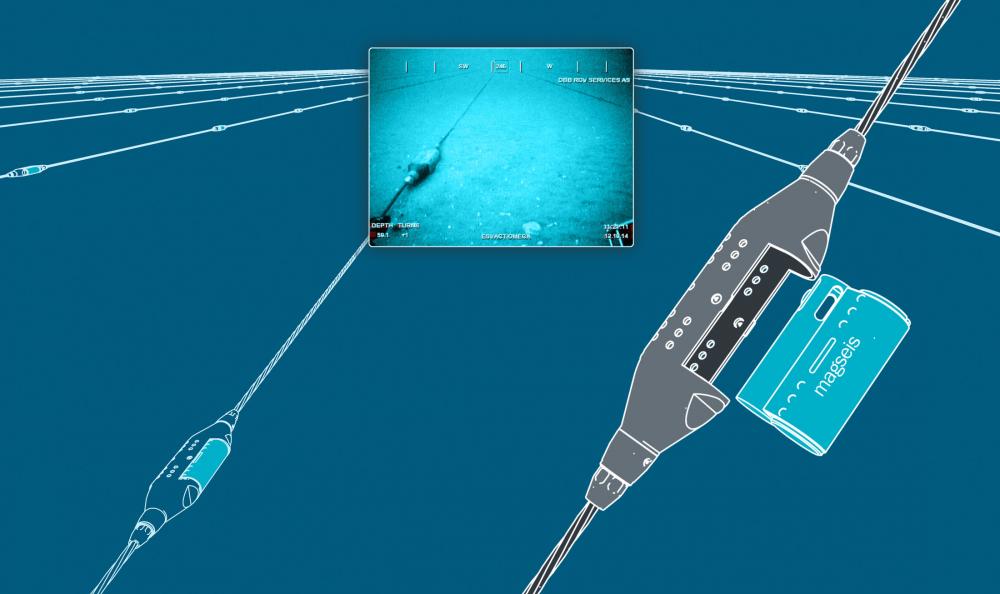 A Magseis sensor (inset) is shown on the ocean floor. The lightweight sensors use technology adapted from the telecommunications industry. (Source: Magseis)

Most major oil companies make significant investments in R&D. But they can’t always go it alone. That’s why several companies have formed “technology ventures” arms to find and fund technology startups that promise to eventually give them a competitive advantage.

Shell was the first company in the energy industry to form such a program, launching Shell Technology Ventures (STV) in 1997. Since then the company has funded multiple startups and has helped to commercialize a considerable amount of useful technology.

One company, Magseis, came to STV’s attention about six years ago at the behest of Shell’s geophysics department. The company had pioneered a new approach to ocean-bottom seismic, combining the productivity of seismic streamer acquisition with the data quality delivered by bulky ocean-bottom nodes. The idea behind the latter is that cables equipped with autonomous sensors are laid on the ocean bottom, providing better coupling and hence a better signal than towed streamers. Ocean-bottom nodes are untethered but require ROVs to place them on the sea surface, which adds tremendous cost to the acquisition process.

“The speed by which the ROV can position these sensors is very slow, and hence it’s very expensive,” said Peter van Giessel, a senior principal for STV. “And the vessel cannot hold many sensors.”

The advantage of Magseis, he explained, is that the cables simply hold the sensors and don’t contain any electronics of their own. “They’re totally autonomous, and the sensor is a mere 7 kilos [15 lb],” he said. A vessel can hold several hundred kilometers of cable containing thousands of these autonomous nodes. And a robotic system on the rear deck speeds up deployment.

“One aspect that separates Magseis from the others is that it’s not just the sensor,” he said. “They thought through the entire value chain. They also have a completely automated back-deck handling system. If you tour their vessel, it’s like a factory, full of robots. It’s totally different than normal streamer seismic.” 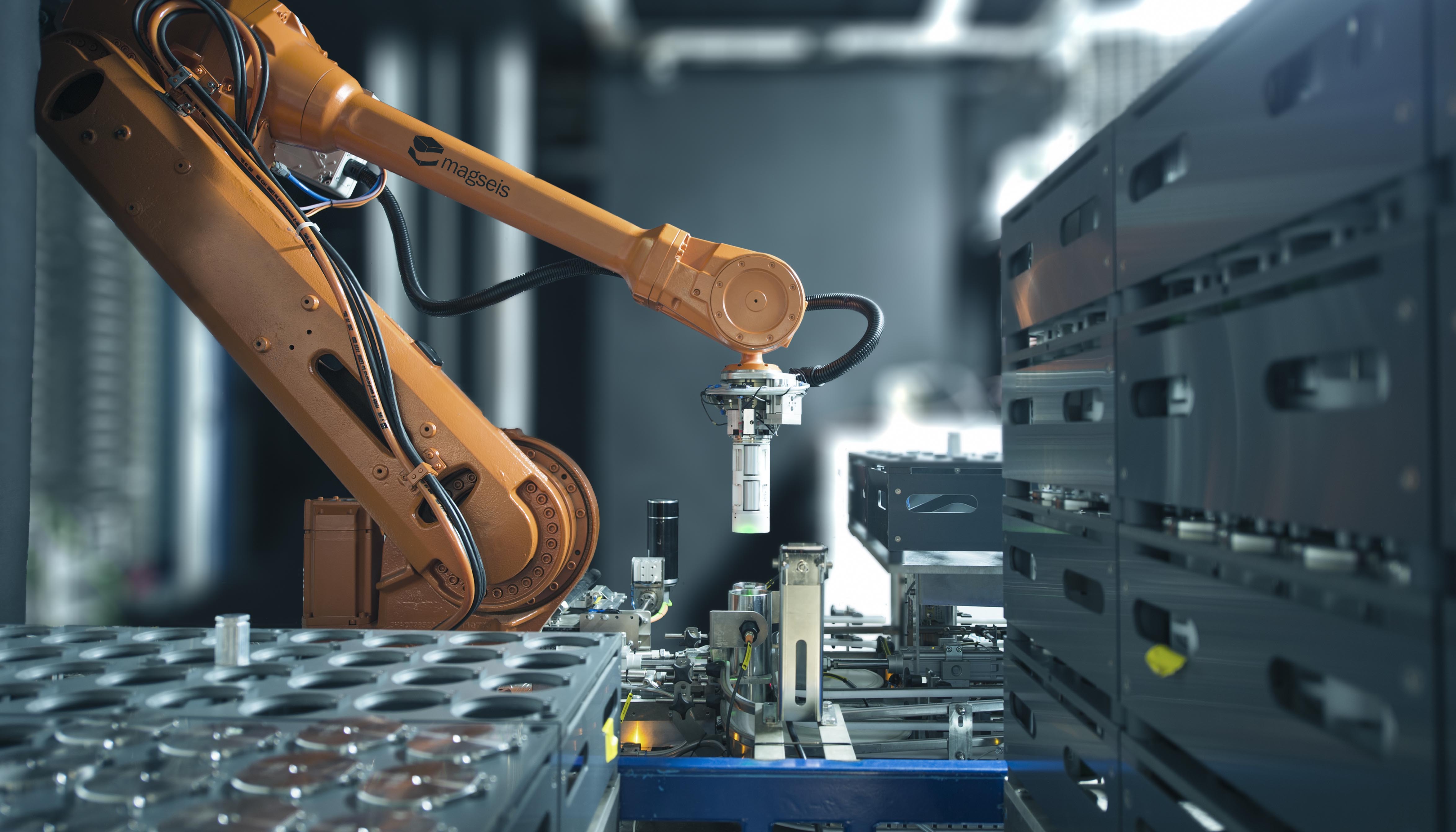 While the concept had been kicked around since the early 2000s, the developers had to wait on the availability of certain classified technology. “They could not get their hands on miniature, low-power atomic clocks,” he said. “These were developed by the U.S. military to put in rockets.

“Only in 2009 or 2010 did they become available for the civil market, and Magseis immediately made sure that they got all the capacity they could get their hands on to put in their sensors.”

While Magseis currently runs one vessel and has no shortage of work, Shell wanted to take the company to the next step.

“Our portfolio is mostly focused on deep water and ultradeep water,” van Giessel said. “When you go into really deep water, it’s hard to ensure that you’re placing the sensors accurately. If you want to do 4-D seismic, can you repeat it? That’s where there was a challenge.”

Shell signed a joint development agreement with Magseis and also made an equity investment in the company. Current research revolves around the behavior of the “nodal multiplier,” which is connected to the vessel through an umbilical and helps precisely place the nodes.

“You need to really understand the dynamics in water and take into account the currents to do extra positioning so that you know at all times where the sensor is and how it behaves,” he said. “The software around it is the tricky bit.”

The goal is to have a deepwater system available this year, but as part of the joint development agreement Shell needs to test it first. This presents its own set of challenges.

“Given the current plan, our operating units could come up with that survey,” he said. “We did a test deep in the fjords earlier this year that was quite successful, so the company is gearing up to build the prototype that they can use in an asset. Our challenge is to find the right asset to do this with.”

It’s also a challenge to find room in Magseis’ busy schedule. “They’re a one-vessel operation, and the vessel is completely occupied,” he said. “The next step for them is the next vessel, but the financial risks to such a small company are substantial. They can only do it with sufficient backing.”

But the existing system already has proved its worth. Shell and its partners deployed it on the Bokur Field in Malaysia in very challenging conditions. They used a dense spacing in an environment crowded with infrastructure as well as vessel traffic. “The operator was very pleased,” he said.

STV is continually on the lookout for these types of opportunities. Van Giessel said that many of them crop up in a fashion similar to Magseis, through a department at the company that has caught wind of a new idea.

“That’s a good source because we already potentially have a launching customer,” he said. “We, of course, like investing in companies that potentially lave large deployment value to Shell.”

The company also works with other venture capital firms, including its competitors at Statoil and Chevron, he said. “That’s not uncommon to us because we realize that these kinds of companies take a long time to be pulled through the valley of death,” he said. “It can take six, eight years, sometimes even longer. We all need to partner to have several shots on goal and to share risk with others.”

External venture firms are important as well. “They like us because we can serve as a launching customer to these startups, and they also like us because we, like them, are focused very much on the financial return aspect,” he said. “To be a strong partner to these venture capitalists, you need to have a strong focus on creating exit value as well as creating deployment value. If you can deliver on those promises, they will bring you the best inflow.”

Downturns often give bright people the time they need to work on their ideas, and STV is reaping the benefits. “It’s a good moment to invest because there are a lot of interesting technologies for oil and gas out there that are looking for money, and money is scarce,” he said. “There’s no shortage of deal flow at interesting valuations.”

Added Geert van de Wouw, managing director at STV, “While we are not shooting seismic at the moment, we know we will be shooting seismic again in the years to come. You have to be anti-cyclical in your investment thesis to deliver the technologies when they are ready and needed.”